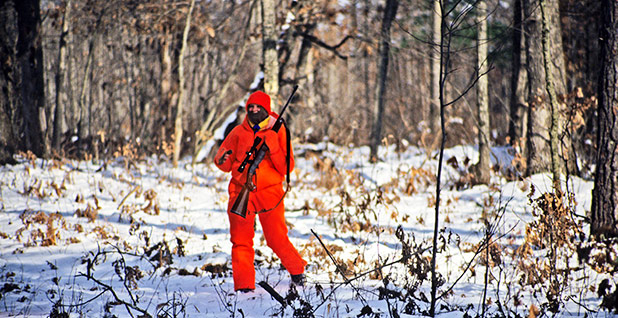 A federal court yesterday threw out a long-standing Justice Department policy on prosecuting killers of protected wildlife only if the hunter knew the target was a listed species.

The U.S. District Court for the District of Arizona found the "McKittrick Policy" was "outside the range of prosecutorial authority" given to DOJ under the Endangered Species Act.

"The government does not need to prove the defendant knew that killing an endangered or threatened species was illegal or that the animal he or she shot was protected under the law," the court’s opinion says. "The responsibility for any mistake falls on the defendant."

"The end of the McKittrick Policy is a crucial victory for critically imperiled animals including Mexican wolves and grizzly bears," said Bethany Cotton, wildlife program director for WildEarth Guardians, in a statement.

"Wildlife killers who are either profoundly careless or worse, who intentionally target protected animals, no longer have a get-out-of-jail-free card by claiming they did not know the identity of the animals they kill," she said.

The policy stems from a 9th U.S. Circuit Court of Appeals case in 1998 in which the defendant, Chad McKittrick, argued that he thought he was shooting a wild dog instead of an endangered Mexican gray wolf in Montana.

The 9th Circuit found that McKittrick "need not have known" he was shooting an endangered species in order to be held criminally liable.

While McKittrick lost the appeal of his conviction, the Justice Department afterward notified its attorneys to stop using the instructions provided in the case for prosecuting people who kill endangered species.

In the late 1990s, DOJ formalized the policy by issuing an internal memorandum requiring the government to prove beyond a reasonable doubt that the defendant in such cases knew the biological identity of the animal harmed.

WildEarth Guardians and the New Mexico Wilderness Alliance sued in 2013, arguing that the policy represented a loophole and a "substantial departure" from the 9th Circuit ruling.

"The DOJ’s McKittrick Policy is a policy that is so extreme that it amounts to a conscious and express abdication of DOJ’s statutory responsibility to prosecute criminal violations of the ESA," the conservation groups said in their complaint.

Under the Endangered Species Act, Congress placed on the killer the responsibility to know the identity of species being killed, Bury wrote.

DOJ’s policy causes "direct and real harm" to the protected Mexican gray wolf, the opinion says. Failure to end it "could undermine reintroduction programs for the wolves and jeopardize recovery efforts," Bury wrote.

The court denied the conservationists’ other claim that DOJ failed to undertake mandatory consultation with the Fish and Wildlife Service prior to issuing the policy.

Mark Allison, executive director at the New Mexico Wilderness Alliance, said that the McKittrick policy has already led to dozens of wolves being illegally shot without penalty.

"We’re gratified by the ruling and eager to take other necessary steps to ensure that the Mexican gray wolf recovery effort is successful," he said.