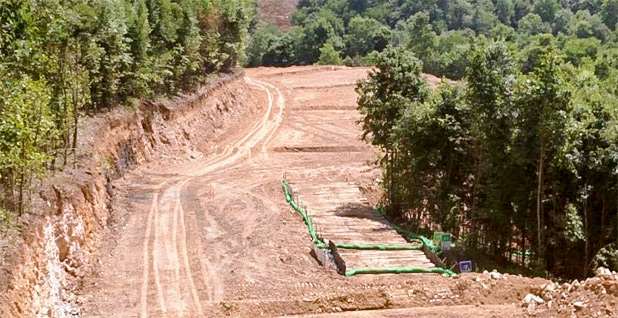 The Federal Energy Regulatory Commission has argued that it is not required to measure downstream climate impacts from burning the gas carried by the 300-mile Mountain Valley pipeline because the fuel would be used regardless of whether the project is approved, Ben Luckett, an attorney with Appalachian Mountain Advocates, argued before the U.S. Court of Appeals for the District of Columbia Circuit.

If that is the case, Luckett said, how can FERC argue that the project is in the public need — a key requirement for property takings under the U.S. Constitution?

The case, Appalachian Voices v. FERC, challenges the commission’s certificate of public convenience and necessity for the Mountain Valley pipeline through West Virginia and Virginia. The certificate allows the project developer to exercise eminent domain power.

The lawsuit touches on many controversial elements of FERC pipeline oversight, including the agency’s handling of land takings, market demand and climate impacts.

FERC last year signaled that it was scaling back its analysis of upstream and downstream greenhouse gas emissions from the projects it authorizes. The commission announced the controversial policy change in a procedural document, drawing dissent from Democratic Commissioners Cheryl LaFleur and Richard Glick (Energywire, Jan. 28).

Judge David Tatel yesterday pushed FERC attorney Lona Perry to justify the agency’s argument that a lack of knowledge about the end use of Mountain Valley’s transported gas precludes an analysis of downstream impacts.

Perry said that it is not clear whether the gas supplied by the Mountain Valley project will spur new demand in its destination region or if it will replace carbon-intensive coal.

Tatel, a Clinton appointee, pondered why FERC did not provide that analysis and why the petitioners in the case did not fight the commission’s dismissal of tools like the social cost of carbon, which serve to qualify climate impacts.

"You have to make your arguments," Tatel told Luckett at one point in the proceedings.

The petitioners challenged FERC’s use of precedent agreements — or gas purchase contracts — to determine that Mountain Valley is in the public interest. They argued that FERC assigned "undue weight" to the agreements, which were struck with Mountain Valley affiliates.

"These are not arms-length negotiations," Luckett said.

Judges Gregory Katsas, a Trump pick, and David Sentelle, a Reagan appointee, pushed back on Luckett’s arguments that the agreements did not show market demand for Mountain Valley’s product.