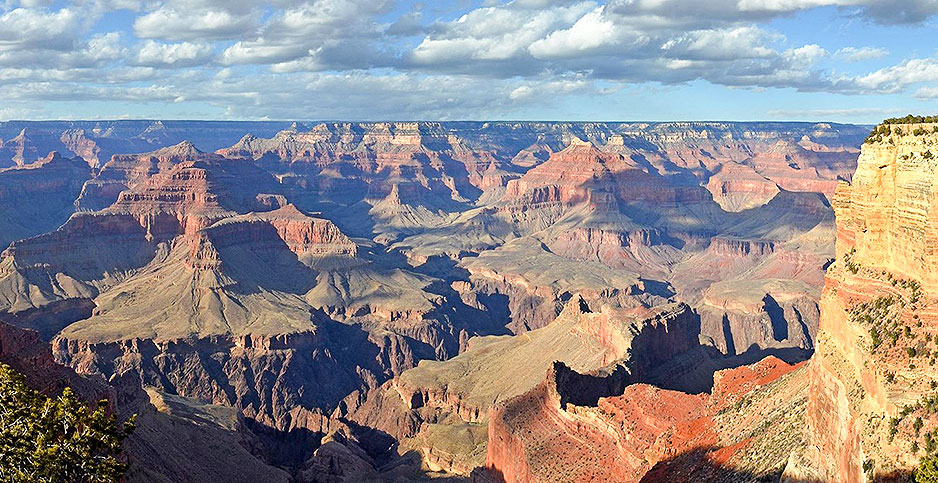 Legal challenges to the use of the Antiquities Act of 1906 have often failed, including a 1920 Supreme Court case involving the Grand Canyon. National Park Service

Opponents of Interior Secretary Ryan Zinke’s review of national monuments are vowing to challenge the Trump administration in court if it attempts to roll back the boundaries of any site — setting up a legal fight over limits of the Antiquities Act of 1906.

The White House is considering a secret draft report — Zinke said yesterday that a "handful" of the 27 monuments he reviewed will be targeted for cuts, without offering specifics on the actual acreage or sites — but gave no indication on when or whether President Trump would act on his recommendations (Greenwire, Aug. 24).

Matt Lee-Ashley, the Center for American Progress’ senior director of environmental strategy and communications, also asserted yesterday that the cuts would total "half or more of the total area" under review, without citing specific sources.

"What exactly constitutes the handful of changes that Secretary Zinke described?" Lee-Ashley said in a news conference. "I very much doubt that he’s talking about a few little boundary changes here and there. Why on earth go to all this trouble or keep your recommendations secret if you’re just going to tinker around the edges?"

He added that sites likely to be reduced include the Utah monuments as well as New Mexico’s Organ Mountains-Desert Peaks and Rio Grande del Norte, Nevada’s Basin and Range and Gold Butte, California’s Mojave Trails and Castle Mountains, and the Northeast Canyons and Seamounts off Massachusetts’ coast.

The Interior Department has rejected requests for comments on the report, referring inquiries to the White House press office.

Despite the fact that both Interior and the White House have referred to the report as a "draft" — and pointed to its status as the reasons it has not been made public — a White House official insisted that "no deadlines got pushed back."

In the executive order Trump issued in late April mandating the review of all monuments established since 1996 comprising more than 100,000 acres, the president set a 120-day deadline for a "final report" with recommendations for "presidential actions, legislative proposals or other actions consistent with law."

"We just decided that there are additional questions and issues that need to be answered and explored in greater detail," the White House official told E&E News, speaking on the condition of anonymity. The source declined to confirm reports of those monuments targeted for reductions.

The official added, "We want time to study the recommendations before releasing. We want to get this right."

But opponents of the monuments review — and any potential changes to existing sites — argue that only Congress has the authority to alter existing monuments.

That dispute is likely to set up a legal battle over the president’s authority under the Antiquities Act, which allows the White House to designate monuments on federal lands with historic, scientific or cultural significance.

Although past presidents have adjusted the boundaries of monuments created by their predecessors, none has done so since President Kennedy altered the acreage of the Bandelier National Monument in New Mexico in 1963.

In the decades that followed, Congress created the Federal Land Policy and Management Act in 1976, and legal scholars assert that law has closed a loophole allowing such changes to be made by the chief executive.

Former Interior Deputy Solicitor for Land Resources Justin Pidot, who is now an associate professor at the University of Denver Sturm College of Law, notes that while the Antiquities Act has faced repeated legal scrutiny, the specific question of reductions or boundary changes has not.

"What authority does the president have to modify or diminish a monument has never been tested in court," Pidot said.

He noted that the prior reductions on federal lands were often done to correct mapping errors or issues with the administration of a monument.

"We’re talking about monuments created between 1906 and 1939, a long time ago, using a lot less technology than we have now," Pidot said.

Nonetheless, conservationists and legal scholars say case law on the Antiquities Act itself suggests any challenges to existing monuments could face an uphill battle.

Pidot noted that federal courts have repeatedly affirmed the "very broad authority on the part of the president to identify a monument."

Although Congress may have intended the Antiquities Act to guard against "pot-hunters" or museums and researchers who were looting archaeological sites in the early 1900s, President Theodore Roosevelt opted to take a more expansive view of the law when he began designating the nation’s first monuments (Greenwire, Aug. 11).

The Supreme Court confirmed Roosevelt’s actions more than a decade later when it ruled in 1920 against an Arizona businessman and miner who asserted that the president had no authority to set aside the then-808,000-acre Grand Canyon National Monument.

"The defendants insist that the monument reserve should be disregarded on the ground that there was no authority for its creation. To this we cannot assent," Justice Willis Van Devanter wrote in Cameron v. United States.

Decades later, the Supreme Court would once again defend the president’s ability to designate more antiquities for protection, in the 1976 ruling in Cappaert v. United States.

The court dismissed arguments that President Hoover should not have been able to designate Devils Hole, a unit of what is now Death Valley National Park, under the Antiquities Act.

"Under that Act, according to the Cappaert petitioners, the President may reserve federal lands only to protect archeologic sites," Chief Justice Warren Burger wrote in the unanimous opinion. "However, the language of the Act, which authorizes the President to proclaim as national monuments ‘historic landmarks, historic and prehistoric structures, and other objects of historic or scientific interest that are situated upon the lands owned or controlled by the Government,’ is not so limited."

He added of the endangered Devils Hole pupfish: "The pool in Devil’s Hole and its rare inhabitants are ‘objects of historic or scientific interest’" (Greenwire, June 9, 2014).

More recently, opponents of national monuments have challenged a host of designations made by President Clinton in his final days in office, including the Grand Staircase-Escalante monument.

"In both cases, they lost handily and the court found that the president had acted well within his authority to create those monuments," Pidot said.

In a 2004 ruling upholding Clinton’s creation of the Utah monument, Utah District Judge Dee Benson said his court did not have the authority to review the use of the Antiquities Act.

"When the president is given such a broad grant of discretion as in the Antiquities Act, the courts have no authority to determine whether the president abused his discretion," Benson wrote at the time (Land Letter, April 22, 2004).

That case was filed by both the Mountain States Legal Foundation and the Utah Association of Counties.

The U.S. Court of Appeals in Washington, D.C., turned back arguments that Clinton had exceeded his authority in designating those monuments.

"Nothing in the record before us indicates any infirmity in the challenged proclamations," the court decision stated. "Each proclamation identifies particular objects or sites of historic or scientific interest and recites grounds for the designation that comport with the Act’s policies and requirements" (Greenwire, Oct. 21, 2002).

Challenges are pending in federal court against two monuments created by President Obama, the Northeast Canyons and Seamounts monument and the Cascade-Siskiyou monument, but have been stayed pending the Trump administration’s review (E&E News PM, May 12).

"We believe that there’s no presidential authority to change a prior president’s monument designations, either size or the other findings," the National Parks Conservation Association’s vice president of general counsel, Libby Fayad, told E&E News. "We believe that we have constructed a good legal argument for that, and we expect to prevail."

In the meantime, members of Congress and outside groups are pushing the Trump administration to unveil the details of the report.

The Center for Biological Diversity filed a Freedom of Information Act request yesterday to force the disclosure of Zinke’s recommendations.

"This entire review has been a lawless, secretive sham," CBD’s public lands director, Randi Spivak, said in a statement. "Now Trump and Zinke are hiding the report so they don’t have to face public backlash for trying to sell out America’s public lands to fossil fuel development and logging. They’re asking for a court battle. And they’ll get one."

While some members of Congress, including Utah Sen. Orrin Hatch (R), have indicated they were briefed by Interior on the report, others, including Oregon Sens. Ron Wyden (D) and Jeff Merkley (D), as well as Oregon Gov. Kate Brown (D), said they had received no information.

A Hatch spokesman declined to provide details of the briefing, referring questions to Interior. "We want to respect that it’s theirs to share," he said.

Nevada Rep. Dina Titus (D) announced yesterday that she will seek an amendment to the Interior appropriations bill to block the administration from making changes to national monuments.

"Whatever this secret report says, I am committed to defending these important places from the attacks of the Trump administration," she said.