Courts may overhaul energy law in 2022. Here’s how 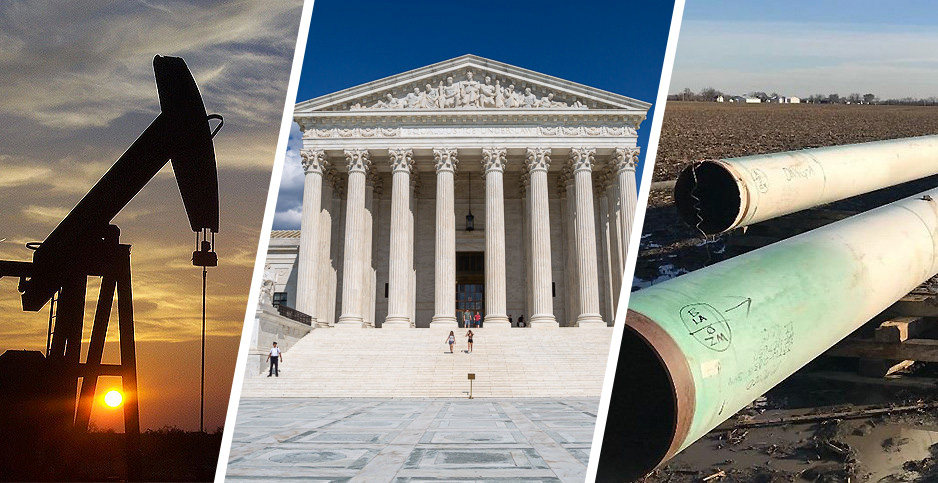 After a year of high-profile energy project cancellations, federal courts in 2022 are expected to speak on the role of climate in oil, gas and power rules.

In February, the nation’s highest bench will consider the scope of EPA’s authority to regulate carbon emissions from power plants. In the lower courts, judges will consider whether the Interior Department can suspend new oil and gas leasing on federal lands and how the federal government can incorporate emissions cost estimates into regulatory decisionmaking.

Some of the cases will be heard by conservative judges who may be interested in blocking the Biden administration from achieving its ambitious climate goal of slashing emissions by about 50 percent from 2005 levels by 2030.

"I think that there’s some concern within the advocacy community about the makeup of the courts and how those bedrock principles of administrative law stand up in the face of judges … who are fundamentally skeptical of the administrative state," said Michael Burger, the executive director of Columbia University’s Sabin Center for Climate Change Law.

This year’s court rulings could also provide answers to long-percolating questions about how federal judges will address regulatory uncertainty as rules change from one administration to the next.

"These are some of the most fundamental, quasi-constitutional issues of modern administration," said Adam White, co-executive director of George Mason University’s C. Boyden Gray Center for the Study of the Administrative State. "Ultimately, I think that’s what these cases might well be remembered for after they’re decided."

Legal experts said the Biden administration is likely drafting proposed environmental rules that can endure review by a Supreme Court with a 6-3 conservative majority.

"The Biden administration is trying to take a very measured, legally sound and thoughtful approach for all regulations," said Carrie Jenks, executive director of Harvard Law School’s Environmental & Energy Law Program. "The goal is to enable industry to make the long-term investments that are needed to address climate change and ensure these regulations stick."

Environmental advocates, Indigenous groups and property owners are also expected to gain momentum in 2022 in their opposition of fossil fuel infrastructure.

In 2021, developers canceled long-embattled projects like the Keystone XL oil pipeline and the Jordan Cove natural gas export facility. The PennEast natural gas pipeline was suspended even after the project notched a Supreme Court win this year (Greenwire, Sept. 27, 2021).

Here are the key energy cases to watch in 2022:

On Feb. 28, the Supreme Court will hear arguments in a high-stakes dispute over EPA’s Clean Air Act authority to regulate carbon emissions from existing power plants.

The case, West Virginia v. EPA, challenges a ruling issued at the start of the Biden administration by the U.S. Court of Appeals for the District of Columbia Circuit that upheld EPA’s ability to broadly interpret the federal law. The decision also cleared the way for the agency to recommend states employ a "best system of emission reduction" that could include shifting to more renewable energy generation or using emissions trading.

Coal companies and Republican-led states have asked the Supreme Court to find that EPA cannot create a similar systemwide approach, limiting the Biden administration’s ability to cut greenhouse gases from an industry whose emissions are exceeded only by the transportation sector (Climatewire, Dec. 14, 2021).

While EPA and its supporters have said Supreme Court review of the matter is premature, White of George Mason University said the case is well-timed.

A broad Supreme Court ruling early in the Biden administration would give EPA a better understanding of what the "rules of the road" will be, he said. The agency has said it plans to release a proposed carbon rule by summer 2022, which is when the Supreme Court could issue its decision.

"So much of the Biden administration’s agenda for climate regulation presumes that it has these powers under the Clean Air Act," said White.

A court ruling finding EPA’s power doesn’t go as far as Biden’s team wants it to "would be a staggering loss," White said.

"The administration has been counting on this," he said, "and they’re about to find out whether they’re right or wrong."

The case could have impact far beyond EPA if the Supreme Court delves into whether the carbon rule violates the major questions doctrine, which says that courts should not defer to agency actions on issues of vast political or economic significance.

But the court is in the highly unusual position of reviewing a regulation that does not yet exist, said Jenks of Harvard.

"Normally, you have a court evaluate a regulation and a record," she said. "For a new rule, there will be a lot of factors for EPA to evaluate."

She later added: "It’s hard to know what this court will decide."

The federal courts are expected to deliver a ruling in 2022 on the Biden administration’s updated social cost of carbon.

In 2021, Republican-led states filed two lawsuits challenging Biden’s interim metric, which put a $51 value on the emissions of 1 metric ton of carbon dioxide and will help the administration justify more stringent climate regulations. The White House is expected to issue a final value soon.

The Trump administration had slashed the figure to as low as $1 per metric ton.

A federal judge said in August that a lawsuit led by Missouri Attorney General Eric Schmitt (R) against Biden’s interim metric was premature, adding that red states still had the option to challenge future rules that are based on the new social cost of carbon. That case is now before the 8th U.S. Circuit Court of Appeals.

In a separate but similar case led by Louisiana Attorney General Jeff Landry (R) in the U.S. District Court for the Western District of Louisiana, a judge appeared more sympathetic to the challenge (Climatewire, Dec. 8, 2021).

Burger of the Sabin Center said the cases foreshadow arguments that conservative interests could make to overturn future rules.

"There is some open question about whether in certain circuits there would be receptivity to the invocation of the major question doctrine or some other basis for attacking it," he said.

Although the metric is used in regulatory analysis, it does not determine agency decisionmaking, said James Coleman, a law professor at Southern Methodist University.

A court ruling on the social cost of carbon, he said, would not be a "substantive constraint" on agency action.

How the courts address federal discretion to stop offering oil and gas lease sales is another issue to watch in 2022.

The question is still before federal judges, even as the Biden administration moves ahead with a record 80-million-acre lease sale in the Gulf of Mexico and is planning for first-quarter onshore lease sales.

Challenges to Interior’s approach "are defining the requirements and discretion that the federal government is under, relative to leasing oil and gas — both onshore and offshore," said Kyle Tisdel, climate and energy program director at the Western Environmental Law Center, which is pushing the Biden team to halt new leasing.

"Our position is that the law on those issues is fairly well-settled, and the agency has broad discretion," he said. "But, clearly, industry and some states are arguing otherwise."

In one of his first moves as president, Biden issued an executive order that temporarily blocked all new federal oil and gas leasing as the government studied the climate impact of its program on federal lands and waters. That analysis was released last month.

The pause sparked a flurry of lawsuits from red states and industry groups like the American Petroleum Institute and the Western Energy Alliance.

One of those cases, filed by Landry of Louisiana, resulted in a nationwide injunction blocking Biden’s leasing pause. That case is now before the 5th U.S. Circuit Court of Appeals (Energywire, Nov. 18, 2021).

After the court ruling, the Bureau of Ocean Energy Management proceeded to offer the nation’s largest oil and gas lease sale in the Gulf of Mexico last month, prompting a new lawsuit from environmental groups (Greenwire, Sept. 1, 2021).

Western Energy Alliance President Kathleen Sgamma said it is important for the courts to "ensure legal precedent keeps the Biden administration in check."

She wrote in an email: "This is another administration, like the Obama/Biden Administration before it, that intends to play loose with executive orders and other non-legal declarations that the courts need to rein in."

Other cases to watch

In 2022, courts are also expected to hand down decisions in several thorny pipeline battles.

Developers of the Dakota Access oil pipeline and Spire STL natural gas project have both recently submitted pleas for help from the Supreme Court.

Energy Transfer Partners LP has asked the justices to find that the D.C. Circuit unlawfully established a new test when it tossed out a key permit for violating the National Environmental Policy Act (Energywire, Dec. 20, 2021).

The company said the Supreme Court should overturn the decision, which wiped out an Army Corps of Engineers permit allowing the Dakota Access pipeline to cross beneath a reservoir in the Dakotas — but stopped short of ordering the pipeline to halt operations, as a lower court had required.

Meanwhile, Spire Inc. has asked the justices to find that the D.C. Circuit improperly tossed out the pipeline’s operating certificate from the Federal Energy Regulatory Commission.

So far, FERC has continued to authorize the project to stay in service (Energywire, Dec. 6, 2021).

The Supreme Court takes up just 1 percent of petitions that come its way.

In the lower courts, legal experts are watching to see how judges will handle an unusual lawsuit that pits the rights of wild rice against an oil pipeline replacement project in Minnesota.

The White Earth Band of Ojibwe argues that Minnesota officials violated the rights of wild rice, or manoomin, by granting a key water permit for Enbridge Inc.’s Line 3 replacement effort.

While the band filed its challenge in tribal court, state officials moved the case to the federal bench. The lawsuit is now before the 8th Circuit, which appears poised to derail White Earth’s challenge (Energywire, Dec. 17, 2021).

But if the band is successful, legal experts say, the case has the potential to dramatically change the way tribal law is applied outside of reservation lands, creating new hurdles for energy infrastructure developers.