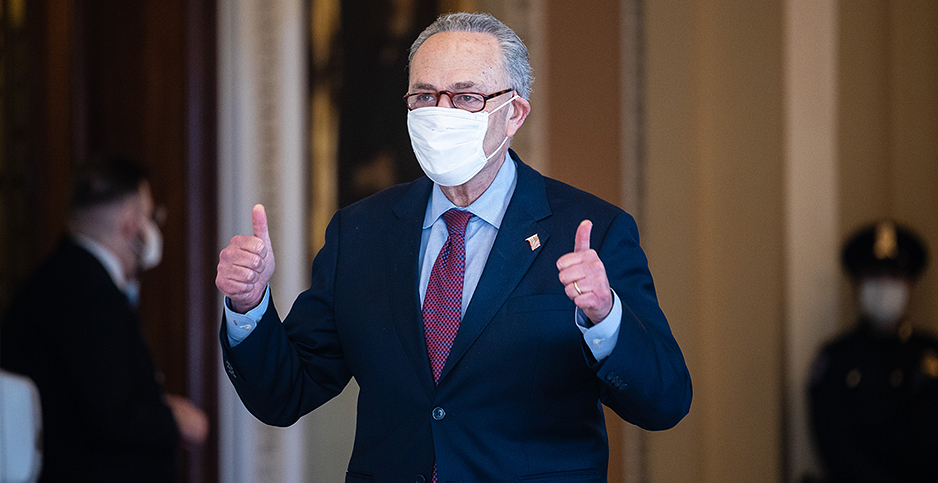 The House tomorrow is expected to pass the $1.9 trillion COVID-19 relief package approved by the Senate over the weekend, handing President Biden a hard-fought legislative victory after Democrats overcame internal disagreements that nearly sank the measure.

The Senate passed the relief bill Saturday on a party-line 50-49 vote, with Sen. Dan Sullivan (R-Alaska) not voting because he left town for a family funeral.

Under the budget reconciliation process employed by Democrats, the relief package was able to bypass the usual 60 votes needed to end a filibuster and advance by a simple majority.

Final passage occurred after a grueling two days of floor debate that kicked off with nearly 11 hours of the Senate clerks reading aloud the more than 600-page bill — as demanded by Sen. Ron Johnson (R-Wis.) (E&E Daily, March 5).

On Friday, amendment debate stalled for 12 hours as Democrats scrambled to strike a deal with Sen. Joe Manchin (D-W.Va.) on extending expanded unemployment benefits, which resulted in a compromise that would allow $300 a week through Sept. 6.

Once that agreement was clinched, senators worked straight into Saturday as they processed dozens of amendments in a "vote-a-rama" that concluded midday, clearing the way for final passage.

The Senate bill mirrors the House-passed version in including $4.5 billion for the Low-Income Home Energy Assistance Program, $500 million in water assistance and $100 million for environmental justice grants.

It also includes $50 billion for the Federal Emergency Management Agency’s disaster fund, $30 billion for public transit agencies, and $95 million for the Fish and Wildlife Service for preventing the spread of COVID-19 and other diseases by wildlife.

Of the $350 billion in emergency assistance provided for state and local governments, the Senate bill added language to make water, sewer and broadband infrastructure eligible for funding. Water advocates applauded the provision.

The Senate bill also includes a Local Assistance and Tribal Consistency Fund led by Sen. Ron Wyden (D-Ore.) that was applauded by the National Association of Counties (NACo). The group said the legislation would provide $1.5 billion in aid to public lands counties over the next two years.

"Federal lands counties rely on natural resource extraction, such as timber and petroleum, as a key component of our local economies," Bousman said in a statement. "The COVID-19 pandemic has cost us jobs in these sectors and negatively impacted communities like mine."

Among the more than three dozen votes before final passage was a proposal to require President Biden to reverse course and approve the Keystone XL pipeline.

In a twist, it was a Democrat — Jon Tester of Montana — who pushed the plan, which he said would help communities affected by the pandemic.

But the amendment was ruled out of order and fell short of the 60 votes needed to waive budget restrictions, on a 51-48 vote. Manchin and Tester were the lone Democrats who joined with Republicans to add the measure to the bill.

However, both Democrats voted against a second effort to tackle Keystone XL offered by Sen. Steve Daines (R-Mont.), which would have sent the bill back to the Foreign Relations Committee with instructions on the pipeline. The amendment fell short on a 49-50 vote.

Senators also rejected on a 48-50 vote a motion offered by Sen. Shelley Moore Capito (R-W.Va.) to send the bill back to the Finance Committee, with instructions to divert the emergency aid for states and local governments to pay for the upcoming transportation reauthorization bill.

Republicans have been keen on pushing energy and environmental issues during the reconciliation process — on the floor and in committee — to get Democrats on the record on various controversial matters.

While Senate Democrats refrained from pushing the limits of the reconciliation process or abolishing the legislative filibuster — as progressive groups have demanded — Manchin yesterday suggested he may be open to filibuster reforms.

In an appearance on NBC’s "Meet the Press," Manchin said the filibuster should stand but added: "If you want to make it a little bit more painful, make him stand there and talk. I’m willing to look at any way we can. But I’m not willing to take away the involvement of the minority."

Manchin reiterated that point in a separate interview on "Fox News Sunday." "The filibuster should be painful," he told host Chris Wallace.

"It really should be painful. And we’ve made it more comfortable over the years, not intentionally, it just evolved into that. Maybe it has to be more painful. Maybe you have to stand there. There’s things we can talk about."

Manchin also signaled an openness to using reconciliation for other issues beyond the tax and budget issues, as is currently required, but said only if bipartisanship has proved fruitless.

With Democrats expected to next turn to a broader infrastructure package that is expected to be crafted with an eye toward boosting clean energy and a more resilient electric grid, Sen. John Barrasso (R-Wyo.) warned Democrats and the Biden administration against shutting Republicans out of the process.

The former chairman of the Environment and Public Works Committee touted the $287 billion bipartisan highway bill that emerged from the panel with unanimous support in the last Congress but languished after Senate Republicans failed to tackle a more than $100 billion funding shortfall.

"It passed unanimously; Bernie Sanders [I-Vt.] voted for it," Barrasso said on "Meet the Press," heaping blame on House Democrats for passing their own highway bill as part of a massive $1.5 trillion infrastructure package last summer.

"They threw it out, a bipartisan-supported bill, and replaced it with the Green New Deal, which raises energy costs on people, puts all kinds of mandates in place, and I think it would be very bad for the economy."

Of Democrats, Barrasso added that "if they want to work with us, take up what Bernie Sanders and John Barrasso agreed to last year in the Environment and Public Works Committee. That is the blueprint for infrastructure."

Even though senators did agree on a bipartisan highway bill, negotiators never came up with pay-fors and leaders did not push it on the floor.