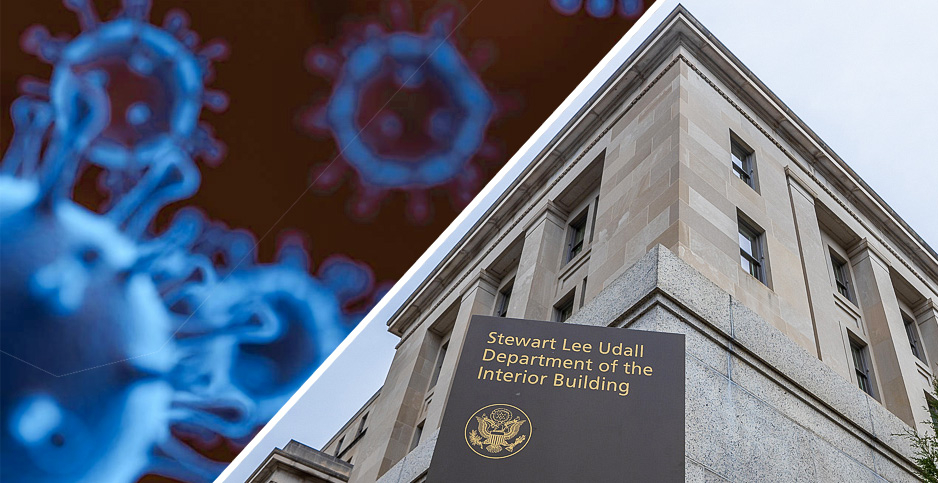 Newly revealed internal data shows that more than 2,000 Interior Department employees have been stricken with COVID-19, with the highest numbers coming from the National Park Service, the Bureau of Land Management, and the relatively low-profile Bureau of Indian Affairs and Bureau of Indian Education.

All told, Interior’s latest weekly "State of the States" reviewed by E&E News indicates that 2,130 "confirmed cases" have been counted among Interior workers, and 17 Interior employees have died from the relentlessly contagious disease.

At the National Park Service, 522 employees have tested positive, followed by 372 BLM staffers and 348 BIA employees, according to the Wednesday internal department report.

"The health and safety of the public and our employees is our highest priority. In accordance with guidance from the Centers for Disease Control and Prevention, the Department continues to take all proper public health actions to limit the spread of COVID-19, while importantly maintaining operations and services for the American people. As we do in all circumstances when an employee attests to having COVID-19, we work with our public health officials to ensure all guidance from the CDC is followed, such as identifying close contacts and cleaning areas as appropriate," Interior spokesperson Ben Goldey said in a statement. "Work-related exposure for employees has been minimal in light of the numerous mitigation strategies the Department has implemented since the beginning of the pandemic."

Citing employee privacy, NPS officials have kept a tight lid on their data, refusing to publicly disclose either the overall number of cases or which of their 423 park sites have been affected.

Data from Dec. 16 Interior Department State of the States report

"Use of our data to inform any outside studies or reporting could be misleading and is duplicative of data gathered from state and local health departments," Stephanie Roulett, a public affairs specialist with NPS, told E&E News in a statement last week. "State and local health departments are the best source of accurate data because laboratories are required to submit test results to those entities."

Interior spokesman Nicholas Goodwin confirmed Wednesday night that Bernhardt had tested positive that day, but was asymptomatic and planned to continue working.

Bernhardt’s positive test results came the same day as a Trump administration Cabinet meeting at the White House. The White House typically tests visitors, but neither White House nor Interior Department officials would say whether Bernhardt tested positive there.

Bernhardt, 51, was not present at the meeting, which was closed to the press, absent the usual photo-op at the start of the meeting. According to the White House, just eight of 15 Cabinet secretaries attended, along with some other top officials.

Fish and Wildlife Service Director Aurelia Skipwith, too, tested positive last month and quarantined herself, E&E News previously reported. She has since returned to her office and to work travel (Greenwire, Nov. 16).

Skipwith informed FWS employees about her positive test last week when she was asked about it during an end-of-year virtual town hall, according to two Interior employees who spoke on condition of anonymity.

The NPS COVID-19 caseload has exploded as the pandemic has worsened across the country, more than tripling from the 150 cases reported from March through September. That’s an increase of 248% in just three months.

Most recently, four employees on the National Mall tested positive for COVID-19. As a result, the park service temporarily shut down the Washington Monument today (see related story).

So far, only one NPS employee has died of the disease.

The U.S. Park Police, meanwhile, has had 16 cases this year, with no fatalities.

At Grand Canyon National Park in Arizona, officials said yesterday that there had been 28 confirmed COVID-19 cases inside the park, with 25 of the victims fully recovered. Those numbers were unchanged from numbers released by the park a week ago.

The Grand Canyon temporarily closed in April after it became one of the first national parks in the country to report a case.

Officials at Yellowstone National Park in Wyoming and Montana, where employees have been routinely tested this year, said in October that 16 additional employees had tested positive in September, marking a new high for the park.

Other parks hit this year include Big Bend National Park in Texas, which shut down in July after a case of COVID-19 was discovered inside the park, and Katmai National Park and Preserve in Alaska, which had to temporarily close the Brooks Camp Developed Area.

Capt. Sara Newman, director of the NPS Office of Public Health, told the NPS advisory board at its September meeting that the 150 cases from the March-September period constituted "a very low number of infections" — 0.6% of the workforce — considering that 96% of the parks were open. She also said 96% of those infected had recovered (Greenwire, Dec. 10).

The rising numbers have already prompted calls for the park service to step up its protections for employees and visitors.

Roulett of NPS said the health of the agency’s workforce and the public "is our No. 1 priority" and that most NPS employees are working from home.

"The NPS continues to exercise maximum telework flexibilities, and most employees are carrying out the NPS mission remotely," she said.

"Interior is working with [the Office of Management and Budget] and the [Centers for Disease Control and Prevention] to develop a list of high-priority occupational categories for our employees, such as those working in health care and emergency response," Goldey told E&E News this week.