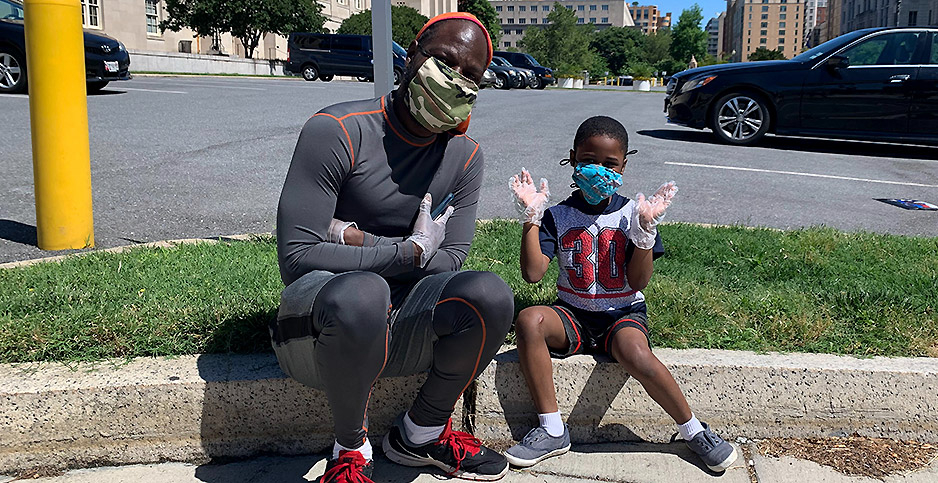 A long line of people snaked around the block outside a COVID-19 testing site in the nation’s capital on a recent morning.

Many people had walked or biked there in stifling heat. Few owned a car — meaning they couldn’t use a drive-thru testing site closer to home.

The scene highlighted a worrisome situation. As the coronavirus spreads in Washington and around the country, car ownership has emerged as critical in determining the ease of getting tested. Public health experts say the use of drive-thru sites for coronavirus testing — if not managed properly — has the potential to create testing gaps along racial and socioeconomic lines.

It’s a problem further compounded by lower levels of mobility in poor communities and communities of color.

"There are three CVSs by my house. But you have to drive through," said Najmah Ahmad, 34, who had biked from her home in Washington’s Trinidad neighborhood to the testing site in Chinatown.

"It would’ve been much easier if those CVSs let you just walk up and get tested immediately," she added. "It would’ve been more convenient for people who aren’t as mobile, who can’t walk over or hop on a bike."

In Washington, where more than a third of residents don’t have access to a car, the government lists five options for free public testing on its coronavirus website.

Two of the five are drive-thru sites.

Only 6.5% of white households in the United States lacked access to a car in 2015, compared with 19.7% of black households and 12% of Hispanic households, according to the National Equity Atlas, a data and policy tool produced by PolicyLink and the University of Southern California.

In the District of Columbia, where many residents rely on mass transit to get around, 30% of white households lacked access to a car in 2015, compared with 40.7% of black households and 43.8% of Hispanic households.

"The data consistently show that black households, Native American households and Latino households have lower levels of car ownership than white households. So if getting tested relies upon you showing up in a vehicle, there’s a racial inequity built into that system of access to testing," said Sarah Treuhaft, a managing director at PolicyLink who leads the National Equity Atlas.

At the walk-up testing site in D.C., Robin Thomas, 63, waited in the shade of a tree. She had taken the X2 bus, which stops and starts at the White House, from her home in Capitol Hill.

A woman who identified herself as Stefanie had walked 50 minutes to the site from her home in the Adams Morgan neighborhood. She declined to give her last name.

There are many factors that explain the racial disparity in car access, experts said.

A big reason is household income.

In 2018, the latest year for which figures were available, white households had a median income of $70,642, compared with $41,361 for black households and $51,450 for Hispanic households, according to the U.S. Census Bureau.

The difference is even more pronounced in Washington, where white households now have an average income of $149,762, compared with $67,689 for black households and $124,745 for Hispanic households, according to the D.C. Health Matters Collaborative, an alliance of health care providers.

Another factor is systemic racism.

Under President Obama, the Consumer Financial Protection Bureau issued guidance reaffirming that such discrimination is illegal. But in 2018, President Trump signed a law scrapping the guidance.

"The disparities we see with access to cars parallel larger racial inequities in our society," Treuhaft said.

"We know that there is discrimination in lending for vehicle ownership. It’s been proven multiple times," she said. "So we see that it’s harder for black and Latino people to get car loans, even if they have the same or similar credit scores as white people."

One worry is how disparities in access to COVID-19 testing could play out amid widespread protests against police brutality.

Over the past 2½ weeks, thousands of protesters have taken to the streets to demand racial justice following the death of George Floyd, an unarmed black man, at the hands of Minneapolis police.

Dr. Anthony Fauci, the nation’s top infectious disease expert, has warned these demonstrations could lead to a second wave of COVID-19 cases this summer.

But if many of the protesters don’t own a car, they may find it harder to get tested, obscuring the true number of infections and risking the premature reopening of restaurants, bars, hair salons and other businesses.

‘We need to transition’

"We need to transition to a different societal model that is more based on collective care," Sen said. "And a robust, reliable, affordable system of public transit will be a critical part of that."

In addition to the coronavirus pandemic, transit can help combat another crisis confronting humanity: climate change.

Buses and trains produce far less planet-warming emissions than cars, according to figures released by the Department of Transportation under the Obama administration.

But since the coronavirus began spreading in the region, Metro ridership has plummeted as people fear contagion on crowded buses and subway cars. An infusion of new funding would allow Metro to invest in more frequent cleaning and disinfecting, which would help passengers feel more comfortable returning, Sen said.

Beyond the nation’s capital, other cities are reimagining mobility with an eye toward both equity and the environment.

Ironically, Detroit — the historical home of the U.S. auto industry — was the first city to start offering free transportation to a COVID-19 testing site for carless residents.

"The way it works is when folks call in to book their appointment, they can request transportation, and then they get transferred over to our dispatch line and connected with a driver," said Marc de la Vergne, chief of mobility innovation for the city of Detroit.

The service costs $2 — the standard bus fare — but the fee is waived for people who can’t afford it. The driver is required to wear personal protective equipment and sanitize the vehicle between passengers.

"There are a lot of folks in the city that don’t have access to a vehicle," de la Vergne said. "And we’ve seen the importance that mobility plays for access to any sort of opportunity, whether it’s educational or health."

To be sure, D.C. does offer options beyond the five free public testing sites.

Several fire departments are providing COVID-19 testing one or two days a week from 4 to 8 p.m., as well as noon to 4 p.m. Saturdays. Hospitals and private health care providers are also offering testing for a fee, while CVS is opening three drive-thru testing sites.

But several people waiting in line at the walk-up testing site reported difficulty accessing those alternatives.

Anne Mullahy, 26, said she and her sister tried to make an appointment at the George Washington University Medical Center, but it didn’t have an opening until next week. The sisters didn’t want to risk waiting that long after participating in Black Lives Matter protests.

Alyssa Mansker, 23, said the firehouse’s Friday hours from 4 to 8 p.m. were inconvenient for her schedule, adding that she doesn’t own a car.

Phillip Frazier, a 47-year-old teacher at a public school, waited with his young son, who wore gloves and a face mask emblazoned with sharks, at the very back of the line.

Frazier said he initially drove to a drive-thru testing site at the University of the District of Columbia’s campus in northeast Washington, but it was closed.

"According to what I read online, it was open on Friday. But it wasn’t," he said. "So this was the only place I remembered that was left."