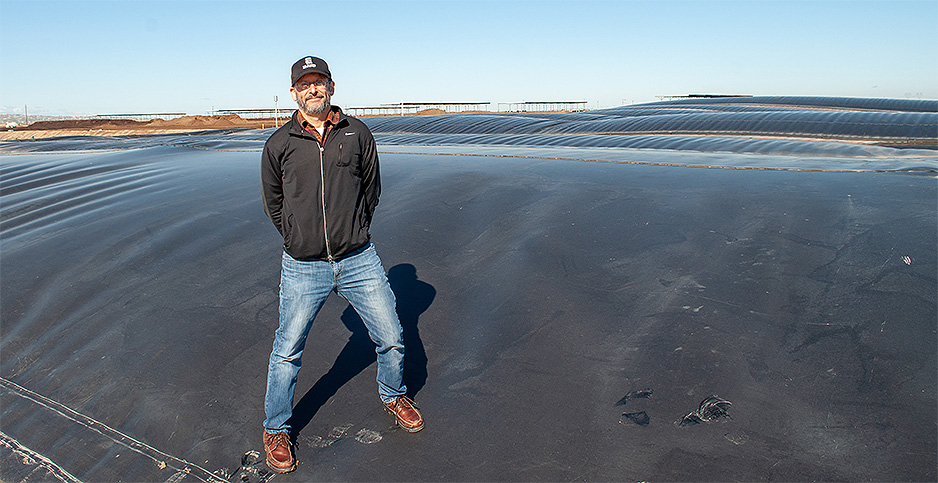 California is the country’s dairy capital, pumping a fifth of America’s milk. Those dairies, however, also produce more than half of the state’s emissions of methane, a potent heat-trapping gas. It comes in roughly equal amounts from both the front of cows — in burps — and the back — in manure.

They are called digesters. Huge sheets of plastic cover manure lagoons the size of multiple football fields. They look like a gigantic version of bounce houses at a kid’s birthday party.

Black says the digesters are a progressive climate change solution that isn’t as extreme as trying to convince consumers to drink less milk or give up pizza.

"We’re not going to convert everyone to being a vegan," Black said. "That’s not going to happen. But we can do this and address the problem."

Methane accounts for 10% of the country’s greenhouse gas emissions, and, according to EPA, dairies and livestock operations are the biggest source of it — roughly a third of that 10%. Making 1 gallon of milk produces about as much greenhouse gas as driving a car 9 miles.

A good investment or ‘just a waste’?

Instead of forcing dairies to completely shoulder the steep costs meeting the new law’s requirements, the state invested heavily.

California has spent more than $250 million in recent years, dishing out grants to large-scale farms to set up digesters on manure lagoons, the type of technology Black’s company, California Bioenergy, specializes in. A digester can cost between $4 million to $10 million, depending on the size of the dairy and what technology is used. The state has provided grants of up to $3 million, requiring the farms to come up with the rest.

"It’s a remarkable partnership between regulators and dairies," Black said. "They didn’t want to force dairies out."

The funds come from the sales on California’s carbon cap-and-trade auction, and critics say there are better ways to spend that money.

"This is an extremely expensive program that the dairy industry doesn’t have to pay for," said Tom Frantz, president of the Association of Irritated Residents, a nonprofit that focuses on air quality in the valley. "This is a polluting industry that needs to pay the cost of its pollution."

Frantz said a better use of those funds would be installing dry manure handling programs, which the state promotes with its secondary methane program for smaller farms. Manure doesn’t emit methane until it gets wet when flushed to lagoons.

"It’s just a waste," Frantz said. "This is a Band-Aid approach to an immediate problem."

Boccadoro said the goal is to limit manure emissions from about 40% of the state’s cows with digesters or other technology. That would span 700,000 cows and may require building 200 digesters by 2030.

Black has become one of the program’s biggest proponents. It’s an interesting turn for the Chicago native, who is far from the typical dairyman.

On a recent tour of a dairy with one of Black’s digesters, the weather was cool and crisp, unusual for this southern part of the San Joaquin Valley where the state’s dairy industry is largely based. The farm felt sprawling, with thousands of cows out at pasture and still thousands more being shuttled inside to be milked.

"The thing that we focus on is methane production and how to limit it," said Amrith Gunasekara, manager of the California Department of Food and Agriculture’s Office of Environmental Farming and Innovation.

The two programs are designed to work hand in hand. The Dairy Digester Research and Development Program, or DDRDP, provides grants up to $3 million for digesters, which capture the methane. In most cases, that’s about a third of the cost; the farmers and developers like Black’s firm come up with the remaining financing.

"Basically both programs address manure from getting wet," Gunasekara said. "In the dairy digester program, the manure is already wet. It’s a wet system. The whole goal is, now that it’s wet, what can we do with it?"

Critics also note that the first digesters didn’t work; many shut down.

But Gunasekara said that was largely because the grants were offered by utilities, and outside groups with expertise in building them — like Black’s and his engineering partners — weren’t involved.

The program’s proponents, like Black, note that nonpartisan state analysis has found that even though the digesters are expensive, they provide the most cost-effective way to reduce heat-trapping gas emissions in the state.

But the state’s involvement does raise questions about whether other states with large dairy industries — such as Wisconsin — can afford to follow California’s lead.

Large and small farmers both said the digesters would be completely infeasible without California’s grant funding.

Meanwhile, Black is moving ahead. He has 30 more digesters in the works. And he’s planning to build a pipeline system to carry the methane from farms to a centralized facility, where it will be will be scrubbed and injected into the state’s existing natural gas infrastructure.

"It’s nonpolitical, bipartisan," he said. "In this day and age, that’s refreshing."