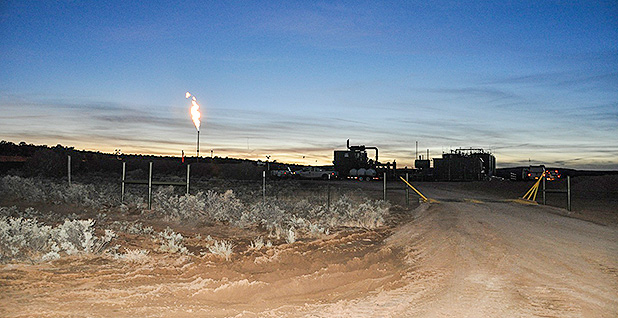 Litigation continues over an Obama-era rule that aims to cut methane emissions from the oil and gas industry. Photo by WildEarth Guardians, courtesy of Flickr.

As the deadline approaches for congressional efforts to undo an Obama-era methane rule, many opponents of the Bureau of Land Management regulation are busy charting their own attack in a parallel court battle.

Litigation over BLM’s Methane and Waste Prevention Rule began immediately after the rule was finalized last November and has been inching forward even as Republicans on Capitol Hill work to sink the rule using the Congressional Review Act (see related story).

Opponents say the regulation — which aims to cut venting and flaring from oil and gas wells on public and tribal lands — interferes with state-level regulations and amounts to an air quality rule beyond BLM’s jurisdiction.

But critics have been divided in their latest legal maneuvering, with some expressing a more urgent desire to have a court review the measure.

In an unusually divisive squabble over scheduling in the case, lawyers for North Dakota, Texas and two industry groups that oppose the rule have urged the U.S. District Court for the District of Wyoming to adopt a quick schedule with legal briefs due in June and July.

They say judicial review is urgent in light of provisions of the rule that have already taken effect, as well as stricter compliance deadlines on the horizon.

Holland & Hart LLP attorney Eric Waeckerlin, representing the Independent Petroleum Association of America and Western Energy Alliance, said oil and gas operators will need to prepare for the next phase of rule requirements within the coming weeks.

"Our operators need to start complying with this rule almost immediately," he said, noting that companies are already complying with the rule’s initial restrictions after the district court in January declined to freeze the rule.

The first phase, in effect now, requires operators to estimate fugitive methane emissions and adjust royalty calculations. The next phase is more burdensome, Waeckerlin said, requiring companies to complete initial leak detection surveys across their operations on public and tribal lands by Jan. 1, 2018.

"For big companies with thousands of wells, that means they have to go out in the next few weeks and start that process," he said. "That’s really one of the more expensive and burdensome pieces of this rule, especially in rural states and rural locations. We get hit first because we have to literally start going out into the field … within the next three or four weeks.

"That’s why the urgency on our end has become even more significant than it was when we argued that we needed a preliminary injunction in January," he added.

Two other opponents, Wyoming and Montana, are taking a more relaxed approach. They support a late-summer briefing schedule, noting that the issue isn’t as urgent in light of Trump administration promises to rethink the regulation. Lawyers for both states did not respond to requests for comment.

Earthjustice attorney Robin Cooley, who is representing environmental intervenors in the case, said that as long as the rule remains effective, they "do not have a dog in this fight" over the briefing schedule. California and New Mexico, which have intervened in support of the rule, have also not taken a position.

Justice Department lawyers representing BLM strongly support the slower approach. In a brief filed yesterday, DOJ lawyers noted scheduling conflicts and further suggested that an expedited briefing schedule would be an inefficient use of everyone’s time in light of the CRA effort and the Interior Department’s ongoing review of the methane rule and other Obama regulations.

"While Federal Respondents appreciate that Industry Petitioners and the States of North Dakota and Texas will need to prepare for the portions of the Waste Prevention Rule that go into effect in January 2018, they also note that there are multiple processes underway that may render Petitioners’ claims moot," they told the court.

North Dakota, Texas and industry aren’t backing down. They filed a detailed brief with the district court Friday, urging it to adopt the expedited schedule and warning of severe regulatory burdens that lie ahead for industry.

Waeckerlin noted that he hasn’t lost faith in congressional efforts to kill the rule but said he must move forward quickly in court because of uncertainty surrounding the process.

"We definitely wanted to give the CRA process a chance to work out," he said. "It’s kind of been this weird game of chicken and egg. You’re just kind of trying to make the best decisions in light of a lot of uncertainty."

Efforts to kill the rule via the CRA have been a roller coaster in recent weeks, with many false alarms that Senate Republicans were ready to pass the resolution needed to scrap the rule. Last night, their efforts got a boost when Sen. Rob Portman (R-Ohio) announced he would support the CRA approach.

"It all is really fascinating and really uncertain and unclear at this point," Waeckerlin said. "This can go a lot of different directions, so we’re just trying to prepare ourselves for those eventualities, whatever they may be."