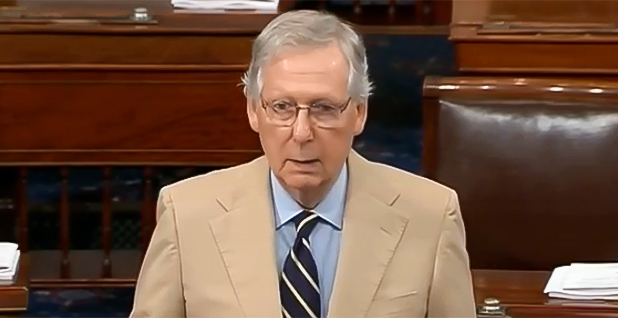 Aides for Senate Majority Leader Mitch McConnell (R-Ky.) are saying the chamber will work through the entire month. C-SPAN

The Senate will return this evening to continue to chip away at a laundry list of agenda items that includes fiscal 2019 appropriations and water infrastructure legislation, as well as confirming nominees.

Senators will vote this evening on a pair of amendments to the combined Defense Department and Labor-Health and Human Services and Education spending measures, H.R. 6157, which the chamber agreed to proceed to last week before recessing for the weekend.

Leaders are hoping to finish the two-bill package — which represents the two largest of the annual spending proposals and totals more than $850 billion — by the end of this week.

Should that happen, the Senate will have completed nine of the 12 spending measures, and staff discussions are ongoing over reconciling as many of the bills as possible with the House for an omnibus package that lawmakers are hoping to send to the White House before the Sept. 30 end of the fiscal year. A stopgap measure would likely be needed to cover any agencies whose bills remain unfinished.

Both Majority Leader Mitch McConnell (R-Ky.) and Minority Leader Chuck Schumer (D-N.Y.) last week urged senators to refrain from offering disputed amendments in keeping with the truce on policy riders that has allowed the chamber to make unprecedented headway on appropriations this summer (E&E Daily, Aug. 17).

New Mexico Sen. Tom Udall, the top Democrat on the Interior, Environment and Related Agencies Appropriations Subcommittee, said last week that staff are working to resolve that panel’s particularly contentious measure for inclusion in any omnibus.

"I think we have a very strong position on the Senate side from which we come from by keeping out these poison pill riders," he said Thursday.

Should the Senate complete the Defense-Labor minibus, there’s been speculation the chamber may scrap the rest of the planned work session and resume the now-truncated August recess — as it did last summer.

That would be welcome news to some senators, including Senate Energy Chairwoman Lisa Murkowski (R-Alaska), who made her displeasure at being in Washington, D.C., instead of Alaska known at a Thursday hearing where she called herself a "founding member of the coalition of the cranky."

While a handful of GOP senators earlier this year urged McConnell to cancel the August recess, at least eight of the 10 senators who skipped Thursday’s session were Republicans, although the absentees included Arizona’s John McCain, who hasn’t been on Capitol Hill in months as he receives treatment for brain cancer.

However, McConnell’s office has pushed back on the notion that summer recess is coming back, saying the chamber will be in session throughout August, ticking off a list of items that will be on deck in the coming weeks that includes judicial and executive branch nominees and an assortment of legislation.

That list includes the bipartisan water infrastructure measure, S. 2800, that is a priority for Environment and Public Works Chairman John Barrasso (R-Wyo.), who said last week that the legislation remains on track for a vote this month (E&E Daily, Aug. 16).

Senate Commerce, Science and Transportation Chairman John Thune (R-S.D.) said he hopes to push the Federal Aviation Administration reauthorization bill through the Senate by the end of the month.

Renewable interests have eyed that measure for another extension of an assortment of energy tax breaks that were reauthorized retroactively earlier this year for 2017, to the annoyance of many senators, who were angling for a longer lease (E&E Daily, Feb. 9).

But Thune said the final FAA product likely won’t include any unrelated tax or tariff provisions, including a proposal from Sen. Bob Corker (R-Tenn.) that aims to limit the president’s ability to levy tariffs under the so-called Section 232 national security provisions of a 1962 trade law.

"I think the FAA tax title, we’d like to keep intact and clean, and so far, we’ve been able to do that," Thune told reporters last week. "We’ve had a lot of people who have offered amendments, but none of them have been tax-related, which I think is a good thing, because I think as long as we can keep bipartisan disarmament on that issue, we’ll be able to get an FAA bill done."

Thune has previously said that he hopes tax extenders can be dealt with separately later in the year. One possible vehicle for that effort could be an upcoming bill to "clarify" provisions of the last year’s tax overhaul that Finance Chairman Orrin Hatch (R-Utah) announced last week he plans to introduce.

Another issue the Senate will have to reconcile in FAA negotiations is disaster-relief provisions of the companion legislation passed by the House in April that the White House has raised concerns about (E&E News PM, April 27).

Disaster response will be a point of contention in ongoing talks to reconcile the two chambers’ competing farm bills. House Republicans want conferees to enact additional forest management reforms in response to the catastrophic wildfires sweeping California and other parts of the West, but Senate Democrats are reluctant to revisit the issue (E&E Daily, Aug. 17).

Also on tap this week are more meetings between senators and Supreme Court nominee Brett Kavanaugh, as Senate Republicans look to confirm the federal appeals court judge in time for him to be seated for the high court’s fall session.

Among the senators who will meet with Kavanaugh this week is Murkowski, who is being targeted by liberal groups to oppose the nominee. She told reporters last week that she has not yet made a decision on how she’ll vote.

"I told everybody the Alaskans will know first," Murkowski said. "I’ll have an opportunity to ask questions. We’ve got hearings coming up in early September."