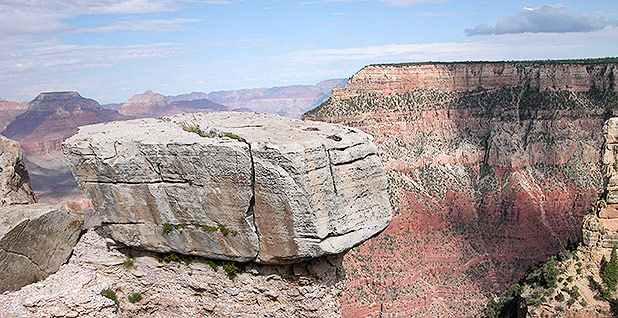 A geologist is suing the Interior Department on claims he was not allowed to collect rocks from Grand Canyon National Park because of his creationist beliefs. Photo by Katie Howell.

The Interior Department is facing a lawsuit from a Christian geologist who claims he was not allowed to collect rocks from Grand Canyon National Park because of his creationist beliefs.

In the suit filed earlier this month, the Australian geologist, Andrew Snelling, says that religious discrimination was behind the National Park Service’s decision to deny him a permit to gather samples from four locations in the park.

Snelling had hoped to gather the rocks to support the creationist belief that a global flood about 4,300 years ago was responsible for rock layers and fossil deposits around the world.

NPS’s actions "demonstrate animus towards the religious viewpoints of Dr. Snelling," the complaint alleges, "and violate Dr. Snelling’s free exercise rights by imposing inappropriate and unnecessary religious tests to his access to the park."

The lawsuit was filed May 9 in the U.S. District Court for the District of Arizona. NPS has yet to respond to the allegations.

According to the complaint and his online biography, Snelling obtained a doctoral degree in geology from the University of Sydney in 1982 and began his career by studying the Koongarra uranium deposit in Australia’s Northern Territory. He spent time in exploration and mining industries before becoming involved with organizations that espouse creationism, rather than evolution.

From 1998 to 2007, Snelling was a geology expert at the Creation Science Foundation and has since worked for Kentucky-based Answers in Genesis, an organization that investigates geology "from a Biblical perspective."

He’s also been an interpreter on more than 30 river trips in the Grand Canyon, which has been a central area of study for creationist geologists.

The complaint describes Snelling as "primarily focused on investigating geological phenomena from the perspective of one who believes in the truth of the Old and the New Testaments."

In 2013, Snelling applied for a permit to study the folding of Paleozoic sedimentary structures at four locations within the Grand Canyon. He wanted to collect 60 fist-sized rocks from the sites.

After seeking the opinion of several individuals in academia, NPS denied the permit on March 4, 2014.

"His description of how to distinguish soft sediment from hard rock structures it not well written, up-to-date, or well referenced," Karl Karlstrom, a geologist at the University of New Mexico who co-authored a 2014 paper on the age of the Grand Canyon, wrote in his review of the proposal for NPS. "My overall conclusion is that Dr. Snelling has no scientific track record and no scientific affiliation since 1982."

NPS told Snelling that there were alternative locations outside of the park where he could gather the samples.

The then-chief of science and resource management at Grand Canyon, Martha Hahn, also warned Snelling that he would be "banned from research in the national park system" if he were to collect the samples without a permit, according to correspondence attached to the complaint.

He tried again in 2016, submitting an amended proposal. Rather than issue a permit, NPS told Snelling he would have to first obtain GPS coordinates and photographs of each of his proposed sites and submit detailed information about how the samples would be extracted.

Snelling refused to do so before obtaining the requested permit, according to the complaint.

"The park has routinely authorized applications proposing far more aggressive sampling without the demand that the researchers first conduct an independent trip to locate each sampling site with specific GPS data," the complaint says.

The lawsuit alleges that the park expressly discriminated against Snelling because of his creationist beliefs and by doing so violated Snelling’s constitutional rights and the Religious Freedom Restoration Act.

It also says that NPS was inconsistent with President Trump’s May 4 religious freedom executive order.

"This case perfectly illustrates why President Trump had to order executive agencies to affirm religious freedom, because park officials specifically targeted Dr. Snelling’s religious faith as the reason to stop his research," said Gary McCaleb, senior counsel at the Alliance Defending Freedom, a Christian nonprofit advocacy and legal group that is representing Snelling in the suit.

Snelling’s situation has attracted the attention of at least one lawmaker.

On Jan. 30, Rep. Trent Franks (R-Ariz.) stepped in on behalf of Snelling, requesting via a letter to NPS Congressional Liaison Elaine Hackett that the permit be issued.

"I am confident there is a misunderstanding regarding the denial or lack of response to Dr. Snelling’s request for issuing the permit," Franks wrote. "Because I have the utmost confidence in the integrity of the National Park Service, I am sure there would be no discrimination based on different viewpoints."