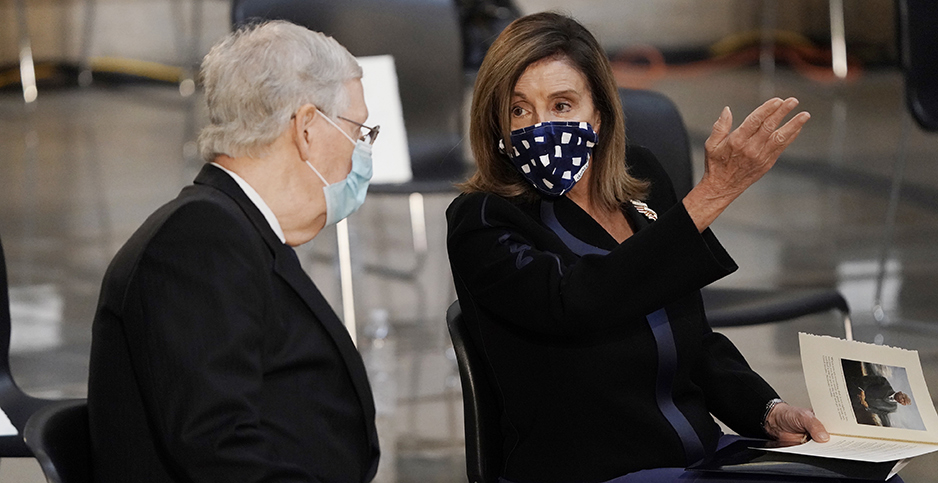 The critical minerals provisions are based on legislation, S. 1317, sponsored by Energy and Natural Resources Chairwoman Lisa Murkowski (R-Alaska).

The language to streamline the mining of minerals necessary for numerous technologies — from energy components to military weapons — is part of a section intended to boost domestic manufacturing of personal protective equipment and reduce dependence on China.

"The COVID-19 pandemic has brought renewed attention to the fact that our nation is heavily dependent on imports for a wide array of goods and technologies that are essential to our health, economy, and security," Murkowski said in a statement.

"We need to reverse our damaging dependence on China and other nations and rebuild domestic supply chains for everything from personal protective equipment to clean energy technologies," she said.

The decision to include critical minerals legislation in the Senate GOP plan may represent Murkowski’s best shot to see a top priority enacted before she steps down as the top Republican on the Energy and Natural Resources panel.

The bill, also sponsored by Energy and Natural Resources Committee ranking member Joe Manchin (D-W.Va.) and other members of the panel, was also included in the broader energy package that stalled on the Senate floor earlier this year. Efforts to include it in the Senate’s National Defense Authorization Act also sputtered.

The critical minerals language was among a handful of energy and environment-related items included in the "Health, Economic Assistance, Liability Protection and Schools (HEALS) Act," released in piecemeal fashion by several committee chairs.

The roughly $305 billion emergency appropriations title includes $1.5 billion for the Low Income Home Energy Assistance Program, as well as $307 million for the Department of Energy’s Office of Science to support COVID-19-related research, according to an Appropriations Committee summary.

Not surprisingly, the GOP bill does not heed calls from clean energy interests for relief to help the struggling sector, which has lost more than 600,000 jobs since the start of the pandemic, according to analysts.

The "HEALS Act" sticks to the priorities telegraphed by Republicans in recent weeks, with an emphasis on reopening schools to the tune of $105 billion, another round of direct payments to individuals, and more funds for the popular small-business lending initiative known as the Paycheck Protection Program, as well as liability provisions to protect schools and businesses from litigation during the pandemic.

Environmental groups decried the GOP plan, which does not include provisions from the $3 trillion "Heroes Act" that passed the House in May, nor the $1.5 trillion green infrastructure package that cleared the chamber earlier this month.

"The COVID-19 pandemic is exposing deep injustices in our country," said League of Conservation Voters Legislative Director Matthew Davis in a statement.

"Environmental injustice, systemic racism, and structural inequality in our country are driving higher coronavirus infection and death rates in communities of color, and Leader McConnell and Senate Republicans don’t seem to notice or care," he said.

"The Republicans’ deliberate choice to put corporations over people has never been clearer or more devastating," said Michelle Chan, vice president of programs at the environmental group. "Polluting industries like Big Oil and Big Ag don’t deserve legal protections if their actions sicken or kill their employees."

Other sticking points include Republicans’ push to trim unemployment benefits that are expiring this week. Aid to state and local governments is absent from the GOP offering.

"Senate Republicans have had weeks to work with the House to craft an emergency aid package that extends these programs, provides resources necessary to defeat this virus, and helps keep public servants like teachers and first responders safely on the job," House Majority Leader Steny Hoyer (D-Md.) noted last night.

House and Senate Democratic leaders met last night with Treasury Secretary Steven Mnuchin and White House chief of staff Mark Meadows to begin formal talks — just four days before the House is scheduled to break for the August recess, to be followed by the Senate one week later.

Senate Republicans signaled yesterday that they hope a deal can be struck within weeks, and McConnell acknowledged last night that the GOP proposal was a "starting place" that would require negotiations with Democrats.

"Every bill has to start somewhere," he told reporters.