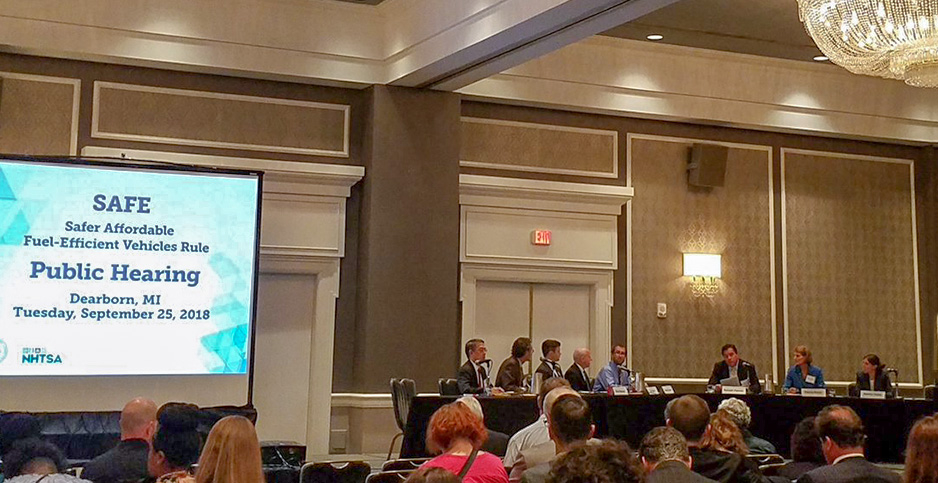 Trish Koman sat through many public hearings during her two decades as an EPA scientist, listening as witnesses pleaded with the agency to tweak its proposals to combat air pollution.

Last week, Koman was on the opposite side of the hearing room, warning Trump administration officials against their proposed rollback of Obama-era clean car rules. She testified at a public hearing in Dearborn, Mich., where she described how the rollback would lead to increased air pollution and related respiratory illnesses. EPA air chief Bill Wehrum watched her testify, she later recalled in an interview with E&E News.

But she doesn’t know whether Trump officials are listening to their critics.

"Are we going to change the minds of the decisionmakers? That’s to be determined. I don’t expect that any single testimony would be definitive," said Koman, who is now a scientist at the University of Michigan. "But my hope is that EPA and the Department of Transportation will listen to reason and understand that a fair bit of what they have produced in this proposal does not comport with the law and does not make good assumptions."

Public hearings offer opportunities for agencies to gather in-person feedback on their proposed actions. Federal law requires agencies to follow an open public process when they issue regulations, although it doesn’t require them to hold public hearings in particular. Many agencies voluntarily hold the hearings for rules that could have a significant impact on the environment, the economy or public health. While some observers view them as just a formality, former agency officials say they can shift how regulations are written.

In this case, opponents of the overhaul vastly outnumbered supporters at last week’s hearing. Only a few of the dozens of witnesses spoke in favor of the rollback. No automakers said they supported freezing the standards, although Fiat Chrysler Automobiles said the standards are difficult to meet given consumer preferences for less fuel-efficient vehicles (Greenwire, Sept. 25).

Still, experts on both sides of the car rules debate don’t expect this administration to budge.

"I think there’s a clear direction in which this administration wants to go in terms of rolling back regulations," said Nick Loris, an energy economist at the conservative Heritage Foundation. "Despite the overwhelming majority of folks who testified at the public hearing against the proposed changes, I don’t know if that will matter one iota as far as influencing the direction of the proposal."

"I think when they account for public comments, they will highlight and emphasize anything they get that happens to support their preferred view," Goodwin said. "And they will ignore or somehow circumvent whatever contrary comments they get."

Yogin Kothari of the Union of Concerned Scientists noted that agencies are required to respond to public comments under the Administrative Procedure Act.

If agencies fail to adequately address public comments, Kothari said, they render their proposals legally vulnerable. Court losses have piled up for the Trump EPA over the past year and a half (Greenwire, Aug. 13).

"I think one reason that EPA has a losing record so far in this administration in the courts is that they aren’t looking to public comments," Kothari said. "They’re doing things that are arbitrary and capricious, and they’re not showing their work. The agency can host these hearings, but if they’re not taking this feedback into consideration, that’s going to result in a loss in the courts."

The administration also stated its preferred option: freezing fuel economy standards at 2020 levels, rather than increasing their stringency each year as President Obama had envisioned.

"It’s important to remember this is just a proposed rule," Wehrum said on a conference call with reporters outlining the options. "And part of the purpose of this rulemaking process is to solicit comment from the public."

In addition to the hearings, the agencies are taking written public comments on the cars proposal through Oct. 26, according to a Federal Register notice.

Overall, the written comments that EPA and NHTSA have gotten are more varied.

E&E News reported in August that a shadowy mass comment campaign had emerged to support the administration’s preferred option (Greenwire, Aug. 30). The organizer of that campaign remains unknown.

In the meantime, another mysterious mass comment campaign has surfaced. Using identical language, the comments all commend the Trump administration for its plans to undo the Obama rule and to revoke a waiver that allows California to issue tougher air pollution rules.

"Obama’s corrupt backroom scheme put Sacramento in the driver’s seat for America’s automotive future," reads one such comment submitted by someone named Betty Lancaster. "That’s wrong. The Obama/California scheme forced auto buyers all over the country to pay more to lavish subsidies on rich buyers of ultraluxury electric cars. I believe it was designed with the ultimate goal of banning the internal combustion engine. I fully support President Trump’s plan to freeze the fuel economy mandate and stop Sacramento liberals from telling me what kind of car I can drive."

"It appears to me that the EPA is no longer living up to its title," wrote Judith Molik. "In my opinion the EPA should be at the forefront in the battle to help the planet, the environment, the people. Instead, leadership is addicted to decision making based on short term profits for a few."

Former EPA officials told E&E News that public comments made a big difference for their own proposals under past administrations.

"I’ve been one of the officials sitting on the other side of the table at many public hearings," said Koman, the former EPA scientist who testified last week. "I was the primary staff team leader for the particulate matter National Ambient Air Quality Standards, when the PM 2.5 standard was set in 1997. … As a scientist, you’re always incorporating new information."

"We made so many changes to the Waters of the United States rule because of all the comments we got," she said.

"You know, farming communities around the country went crazy," Southerland added. "We really did make significant changes to try to satisfy the agricultural community, which maintained that we were going to regulate regular raindrops just running across their fields."

Bob Meyers, who led EPA’s air office during the George W. Bush administration, couldn’t recall attending a public hearing during his stint at the agency. But he said current EPA air chief Wehrum would likely be receptive to the concerns he heard in Michigan.

"Bill and I worked together. I certainly think that he’s a good listener," Meyers said. "But then again, the format’s not the best. It’s not a format where you have much back-and-forth."

Janet McCabe, who led EPA’s air office at the end of the Obama administration, said her team took public comments into thorough consideration when drafting the Clean Power Plan, Obama’s signature initiative for curbing emissions from the power sector.

"If people looked at the proposed Clean Power Plan and the final Clean Power Plan, they would see a lot of changes that were made in response to utilities and communities raising concerns," McCabe said. "There were significant changes."

But McCabe said the Trump administration can’t be expected to consider public comments with the same gravity as the Obama administration, given the zeal with which it’s pursuing a deregulatory agenda.

"The policy direction of this administration seems to be quite clear," she said. "So my expectation is that they would be pretty set on their proposed alternative and would find ways to respond to the public comments that they’re getting without having to change their direction in a significant way."

EPA and NHTSA hope to finalize the amended car rules by early next year. EPA didn’t respond to a request for comment for this story.

A NHTSA spokeswoman said in an email to E&E News, "EPA and NHTSA have proposed 8 alternative options to open a public discussion for shaping future fuel economy standards for model year 2021 and beyond. The purpose of the proposal and public comment process is to have a transparent, productive discussion and collect feedback. … Data and analysis will determine the final outcome."