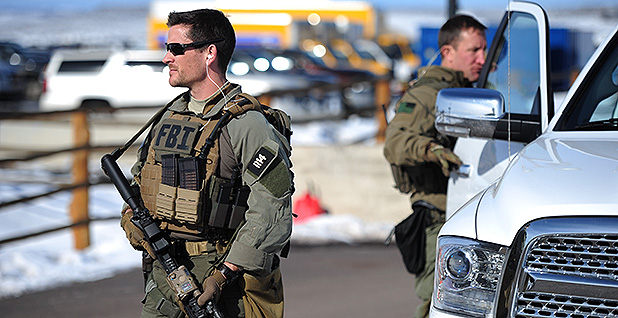 This story was updated Nov. 3 to add additional comment from the Fish and Wildlife Service.

After last week’s surprise acquittals in the Malheur National Wildlife Refuge armed standoff trial, critics are challenging how the federal government handled the occupation itself and suggesting its strategy may have hamstrung prosecutors.

The critics contend that the FBI’s hands-off approach — letting the occupiers use the refuge as they pleased — limited the charges prosecutors could bring against the seven defendants in the trial.

While they acknowledge the FBI’s strategy was aimed at avoiding a shootout and bloodshed, critics believe law enforcement’s treatment of the occupiers during the 41-day standoff allowed defense attorneys to paint their clients as nonthreatening activists.

Others questioned whether race played a role. They noted that the non-guilty verdicts against the seven white defendants in the Oregon standoff case came the same day authorities aggressively cracked down on nonviolent, Native American-led protests of the Dakota Access oil pipeline in North Dakota, using tear gas and riot gear.

"The jury is scratching their heads and saying, ‘Wait a minute, you are telling me these are dangerous armed men but the FBI let them come and go from the standoff? Get mail delivery. Travel interstate. Go to public meetings,’" said Kierán Suckling of the Center for Biological Diversity.

"All of that is saying to the jury that these are nice guys and they are traditional protesters," he said.

Suckling said he is not advocating that the FBI should have stormed Malheur with guns.

"But shut down the water," he said. "The electricity. The internet, for Chrissakes."

The seven defendants in the Oregon case, including leader Ammon Bundy and his brother, Ryan, were charged with conspiring to impede federal officials through the use of force, threats or intimidation. Some also faced secondary firearm or theft charges. The jury found all of the defendants not guilty on the conspiracy charge and returned acquittals on all other charges except one, Ryan Bundy’s theft charge, on which they did not reach consensus (Greenwire, Oct. 28).

During the standoff, the FBI avoided confrontation with the occupiers, though it was revealed during the trial that it had multiple confidential informants at the refuge.

Law enforcement did not cut off access to the refuge and allowed occupiers to come and go. They also allowed mail and supplies to be delivered by sympathizers.

That continued until Jan. 26, when Bundy and others were arrested during a roadside stop. It was then that Robert "LaVoy" Finicum was shot and killed by Oregon police after reaching for his gun — the only casualty of the standoff (Greenwire, March 8).

Bob Dreher, a former acting assistant attorney general for the Justice Department’s environmental division, said he would not second-guess the FBI’s handling of the occupation because they avoided the bloodshed that occurred at the sieges in Ruby Ridge, Idaho, in 1992 and Waco, Texas, the following year.

But Dreher, now a senior vice president at the nonprofit Defenders of Wildlife, said that observers "raised concerns at the time" that the FBI’s approach "was sending a bad signal that they were being tolerated in this."

"The jury verdict will amplify those concerns," he said.

An FBI spokesman declined to comment on the agency’s strategy during the standoff. He pointed to statements made by FBI officials at the conclusion of the occupation regarding the nearly violence-free resolution of a conflict that could have erupted.

Still, during the trial, defense attorneys repeatedly emphasized that law enforcement personnel’s treatment of the occupiers suggests they weren’t violent — and consequently did not impede federal employees.

"I just sat through five weeks of a trial about threatening federal employees without hearing a single threat," attorney Matthew Schindler, who represented defendant Kenneth Medenbach, said in his closing argument.

Other attorneys who were not involved in the case questioned whether the FBI and FWS’s actions during the standoff limited what charges prosecutors could bring.

Because there was no confrontation, the government could not bring assault or even resisting arrest charges, they said. That also may have limited their ability to charge the occupiers with trespass, they said.

But trespassing is a misdemeanor, and the government wanted to send a signal with felony charges.

"If there had been some other federal statute that specifically addresses the conduct, we would have considered using it," Williams told OPB. "We have and still believe we brought the most applicable and appropriate charges under the evidence, which is our duty."

At least one juror in the case has said the jury did not believe the prosecution proved the conspiracy charge and the occupiers’ intent or mental state during the occupation.

Several of the occupiers who were not part of the recent trial are set for trial in February. The Oregon federal public defender, Lisa Hay — who represents at least one of those defendants — told The Oregonian newspaper yesterday that the conspiracy charges should be dropped in light of last week’s verdict.

One such defendant, occupation leader Ryan Payne, filed a motion to reverse his earlier guilty plea before the verdict came down.

FWS also could have taken more action during the occupation, said Andy Stahl of the Forest Service Employees for Environmental Ethics.

Stahl noted that decades ago, the Forest Service frequently dealt with activists protesting logging and industrial activities on federal property.

In those instances, the service frequently issued administrative closure orders, which made it illegal for members of the public to enter those areas.

During the Oregon standoff, FWS didn’t issue such an order.

"That’s the only way you can put in place a no trespassing sign on public land," Stahl said.

A FWS spokesman, however, said Malheur was officially closed during the standoff, and notice of the closure was posted on the refuge’s website in accordance with FWS regulations.

The verdict could also create a "perverse incentive" for more confrontation if another standoff occurs, said Aaron Weiss of the Center for Western Priorities, which opposed the standoff.

"The potential for violence next time is much, much higher now because of the way this ended up resolving itself in court," he said.

Steve Wax, who worked as a federal public defender in Oregon for three decades, was more critical of the prosecution.

He said there were other charges they could have filed and suggested race and religion — the occupiers were Mormon or Christian — played a role.

"If you read the definition of domestic terrorism in the U.S. code, you’ll see that it talks about using force to try to affect a policy," he said. "I raise the question because the use of terrorism charges against Muslims, people in the Middle East stands in stark contrast to the nature of the charges here."

Wax and others were quick to draw comparisons between law enforcement’s handling of the Oregon occupiers and the Dakota Access pipeline protests in North Dakota that are led by the Standing Rock Sioux and Cheyenne River tribes.

"Note the dramatic difference," said Vermont Law School professor Pat Parenteau, "between how our criminal justice system deals with the armed white protesters at Malheur seeking to destroy public property and threaten government employees in contrast to the peaceful tribal member protesters at Standing Rock seeking to protect their ancestors graves and their tribe’s water supply who have been surrounded by a heavily militarized, multistate police force and dispersed by tear gas and attack dogs."

In the Oregon trial, Wax said the verdict and comments by the one juror afterward that were critical of the prosecutors reflect a shifting political mood in the country that the prosecution may have underestimated.

Wax, who now works for the Oregon Innocence Project, said in his 30 years of trying cases in Oregon that juries have always thought that prosecutors and FBI agents were there to protect them.

The verdict, he said, indicates that may no longer be the case. He pointed to the extreme anti-government rhetoric in the current political campaign, including from Republican nominee Donald Trump.

"The verdict was returned in a very politically charged atmosphere in this country," Wax said. "In a context in which the anger at government and anger at the status quo has been brought to the fore by the presidential election. That context, I think, may well have played a role in the deliberations."