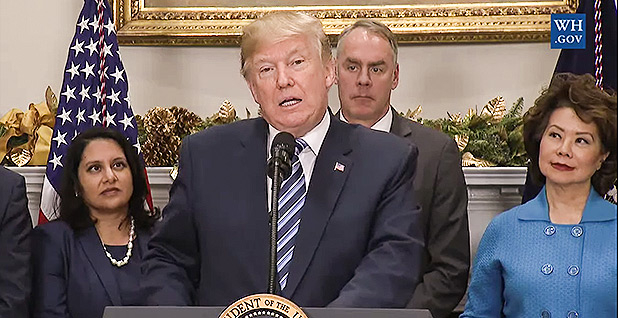 President Trump yesterday touted his administration’s progress in killing, freezing or delaying hundreds of regulations, but critics say the enthusiasm may be overblown.

In announcing his second regulatory plan, the president said his Cabinet has rolled back 22 rules for every new one, far exceeding his original two-for-one goal (E&E News PM, Dec. 14).

"We beat our goal by a lot," he said during a White House speech. "Instead of adding costs, for the first time in decades we achieved regulatory savings. We blew our target out of the water."

Regulatory policy experts, however, cast doubt on the accuracy of these claims.

The 22-for-1 metric includes rules that were withdrawn before agencies even issued them, said James Goodwin, senior policy analyst with the Center for Progressive Reform.

Amit Narang, regulatory policy advocate with Public Citizen’s Congress Watch, echoed these concerns. "There were a lot of fake figures that were cited," he said.

"I’m sure he’s including regulations that were withdrawn. They weren’t in effect," said Narang. "There are no cost savings associated with withdrawn regulations."

The Trump administration’s regulatory czar confirmed at a press briefing yesterday that withdrawn rules were included in the official tally.

After his remarks, the president cut a symbolic piece of red tape. The White House also put up stacks of papers representing the scope of federal regulations in the 1960s compared with today.