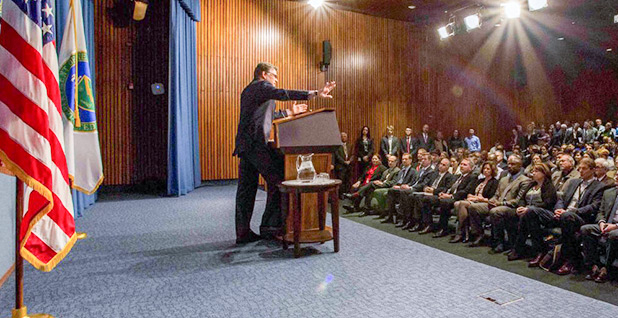 The Federal Energy Regulatory Commission dealt what some called a resounding defeat to Energy Secretary Rick Perry yesterday, and in taking their victory lap, opponents have directed strong criticism at the man in charge of the Department of Energy.

In rejecting Perry’s proposal to compensate coal and nuclear plants for the stated reason of maintaining electric grid resilience, the independent agency struck down what some critics of the plan saw as a transparent bid to help out big donors in the struggling coal industry.

"This was a crazy Hail Mary pass in the first quarter of a game on an issue which … calls for a long, solid ground game," said Paul Bledsoe, a former consultant at the Energy Department under President Obama, and now a strategic adviser at the Progressive Policy Institute. "Perry looks like a very poor play-caller indeed."

A common thread among critics of the plan was that it was, in Bledsoe’s words, "cooked up by a couple of far-right staffers."

"One striking thing about the whole NOPR episode is just what an enormous armada of intellectual firepower was brought to bear against what was, in the end, intern-at-right-wing-think-tank level hackery," wrote David Roberts, a Vox blogger, on Twitter.

DOE denies both that the episode represents a "loss" for Perry and that politics were part of the equation.

"The secretary does not view this as a ‘loss’ because to him this is not a political game. While he remains very concerned about the long-term reliability and resiliency of the nation’s electrical grid, he is encouraged that FERC is moving forward on this issue," said DOE spokeswoman Shaylyn Hynes. "His proposal revived a nationwide conversation about resiliency, and FERC is taking further steps to review the problem. That is good news."

In turning down Perry’s proposal, FERC also announced yesterday that it would open its own rulemaking docket to examine resilience in all the markets it oversees (Energywire, Jan. 9).

Joel Eisen, an energy law professor at the University of Richmond, said the move stood out in recent memory.

"This is as impressive an action as FERC [has] taken in the 15 years I’ve been following and writing about it," he wrote on Twitter.

Mike McKenna, a Republican energy lobbyist who served on President Trump’s DOE transition team, said the failed effort under Perry stemmed from a misunderstanding of the differing roles of FERC and DOE.

"The effort, while understandable and perhaps even laudable, was compromised ab initio by a lack of comprehension of the roles of FERC and DOE," McKenna said. "Statutory construction is one thing; customs, norms, and institutional history and imperatives are quite different (and more powerful) things."

McKenna, who lobbies for Atlanta-based Southern Co., said DOE also overlooked that many states have taken proactive steps to preserve nuclear power stations while failing to do the same for coal plants.

The Trump administration, he said, should take that lesson to heart — but may not.

"Unfortunately, I expect that this is not the last we have seen of this sort of effort to manage FERC and its processes," he said.

Tom Pyle, president of the Institute for Energy Research and the former head of Trump’s energy transition team, said DOE’s proposal was "heavy-handed and off the mark."

"Those of us who recognize the benefits of freer markets, should look upon this FERC decision with approval. This unanimous vote and our support for it is not a rejection of the importance of grid resilience, but rather a rejection of Secretary Perry’s massive proposed intervention in electricity markets on top of an already distorted structure," Pyle said in a statement.

FERC’s reputation up or down, depending on whom you ask

The decision yesterday unsurprisingly earned FERC criticism from some quarters and praise from others, and attracted attention outside its wonky set of close followers.

"The deep state is very real. More government officials who don’t support the Trump agenda," tweeted Corey Lewandowski, Trump’s former campaign manager and now a Washington lobbyist, along with a story about the decision.

Four of the five commissioners at FERC are Trump appointees.

For other observers, such as Bledsoe, the decision was a triumph for the independent agency.

"This sends a clear signal that independent agencies like FERC are increasingly willing to stand up to the more conspicuous anti-science policy manipulations of the Trump administration regarding climate change and energy," he said. "Facts still matter at the FERC."

"FERC has a sterling reputation of adherence to not only evidence-based policy decisions, but, in most cases, broadly consensual ones, involving commissioners of both parties," he said.