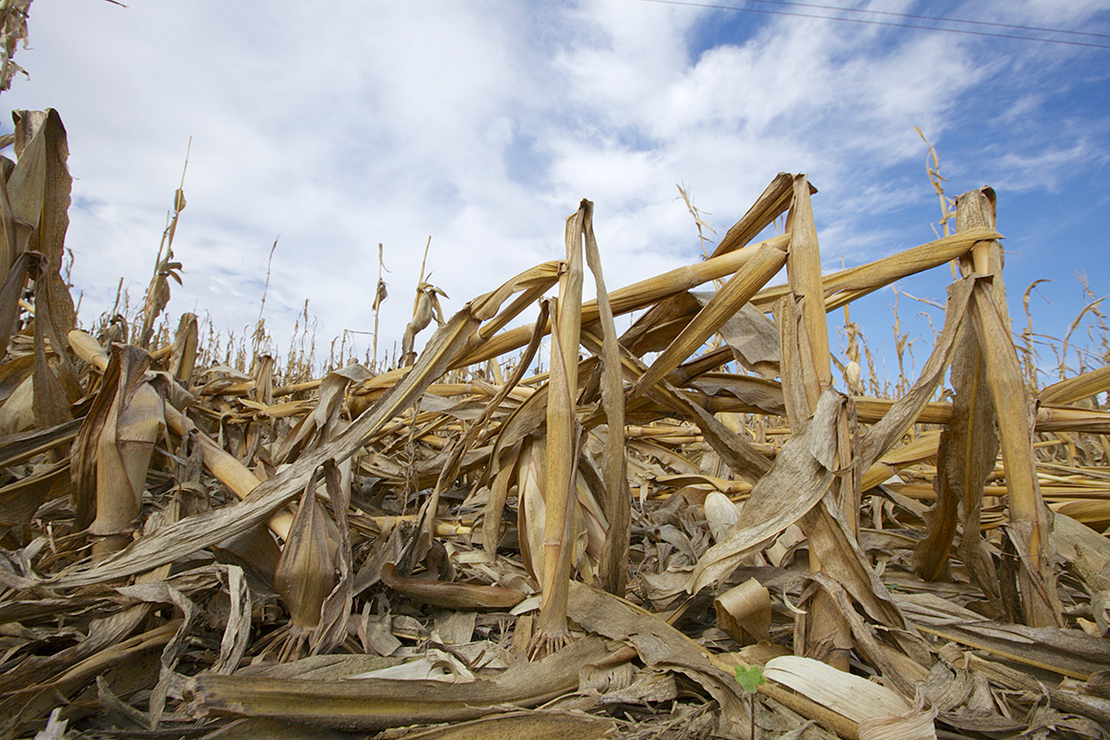 Corn plants weakened by drought lie on the ground after being knocked over by rain in Bennington, Neb., in 2012. Nati Harnik/AP Photo

A farm safety net built for the Dust Bowl era is about to clash with the age of climate change.

The federal crop insurance program, which pays farmers for poor or lost harvests, may be facing some of its biggest challenges since its adoption in the 1930s, as Congress and the Department of Agriculture look for ways to manage the risks of flood, drought and other weather disasters all over the country.

Those risks will continue to change as the climate warms, a USDA official said last week. In California’s Central Valley, the USDA projects that crop insurance payments due to excess moisture will outstrip those for drought — a pattern that could be repeated in the Pacific Northwest.

And in the East, a crop insurance program designed for Farm Belt commodities like corn and soybeans will face continued pressure to protect specialty crops vulnerable to spring freezes, hurricanes and other events that scientists say are likely to inflict more damage in the coming decades.

“All of us in agriculture work together to combat climate change and improve voluntary adoption of conservation practices,” Tom Zacharias, president of National Crop Insurance Services, a lobbying group for insurance providers, said at last week’s annual outlook conference hosted by the USDA. At the same time, he said, policymakers must ensure the financial integrity of the program — a nod to the government’s role in subsidizing crop insurance and to a legal requirement that payouts over time may not exceed premiums collected.

Crop insurance has broad support on the House and Senate Agriculture committees, equally among Democrats and Republicans. But it’s also under pressure to adjust to climate change, such as by offering farmers stronger incentives to plant cover crops or cut down on greenhouse gas emissions.

In a panel discussion on crop insurance, Zacharias spent most of his presentation defending the program and touting the partnership between the USDA and the companies his group represents, calling it agriculture’s “first line of defense” against weather catastrophes.

Despite the program’s challenges, it’s in better shape than it was decades ago, David Zanoni, an underwriter with the USDA’s Risk Management Agency, said at the conference. Before a revamp in the mid-1990s, the program paid out more than it collected in premiums, on average. Now, he said, “overall, the good years pay for the bad years.”

The discussion came as groups like the Environmental Working Group step up efforts to revamp crop insurance with a greater emphasis on climate change. The EWG, long critical of the program’s focus, released a new analysis showing repeated crop insurance payouts to the same counties for weather disasters — a lesson, the group said, that farmers need to change practices and that the program itself is wasteful.

The counties in the Mississippi River basin, for instance, appear to be a crop insurance “hotspot,” the EWG said, receiving more than $3 billion in payouts from 2001 to 2020. Among other findings, the EWG reported that 40 counties in the region received crop insurance payments for both drought and “excess moisture” in the same year — for 20 years in a row.

“USDA’s Crop Insurance Program must be reformed to encourage farmers to both adapt to the climate crisis and reduce their own emissions,” Anne Schechinger, the EWG’s Midwest director, said in a statement accompanying the report. “Some of the astronomical financial cost of this program — and the climate cost of agriculture — could almost certainly be alleviated by better choices, like taking environmentally sensitive land permanently out production.”

The EWG has created a crop insurance database on its website.

On a global scale, the United Nations’ Intergovernmental Panel on Climate Change noted in its latest report that diversity among crops can help reduce insurance payouts over the long term. “Moreover, there are new crop insurance schemes that are based on changes in weather patterns,” the final draft report said.

In the U.S., federal crop insurance is provided by about a dozen companies approved through the USDA and cost $7.9 billion for the 2020 crop year — not including premiums paid by farmers, the department said. The government covers, on average, about 60 percent of the premiums, leaving 40 percent to farmers. The ratio varies depending on the crop and what level of coverage, as well as where it’s grown, as every crop isn’t covered in every county.

In addition to covering specific crops, the government has adjusted the program over the years to cover whole farms, a policy targeted at farmers who suffer losses across a variety of vegetables and fruit, for instance. And the USDA recently added coverage for crops that suffer a significant drop in quality, even if they’re not entirely lost.

Other changes have come more slowly, including making crop insurance compatible with conservation practices like cover crops, which researchers say boost the soil and sequester at least some carbon. In that situation — where farmers plant grass, for instance, to hold the soil and conserve moisture in the offseason — rules governing how the main crop is then planted have complicated the program for farmers. The result, according to a 2017 survey by the National Sustainable Agriculture Coalition, has been to discourage growers from adopting these practices (Greenwire, Sept. 26, 2017).

The 2023 farm bill is likely to address such shortcomings, and Congress has shown a willingness to encourage conservation through crop insurance by requiring farm conservation plans as a condition of coverage. In addition, the USDA last year said it would pay $5 per acre to plant cover crops if they followed the practice with an insured crop. That program continues this year, Zanoni said at the outlook conference.

Nearly 100 percent of farmers in the crop insurance program have complied with the conservation requirement, Zanoni said, although some farm groups say the mandate isn’t strong enough and may push for changes in the farm bill.

Republican lawmakers have begun to defend the program, including Rep. Glenn Thompson (R-Pa.), the ranking member of the House Agriculture Committee. At a hearing last week, Thompson took issue with the idea of changing crop insurance to make it more climate-oriented.

“I think that’s looking at the problem completely the wrong way,” said Thompson, who added that he welcomes the discussion about climate change. “Rather, we should be asking ourselves what we can do to make climate policy more farmer-friendly.”