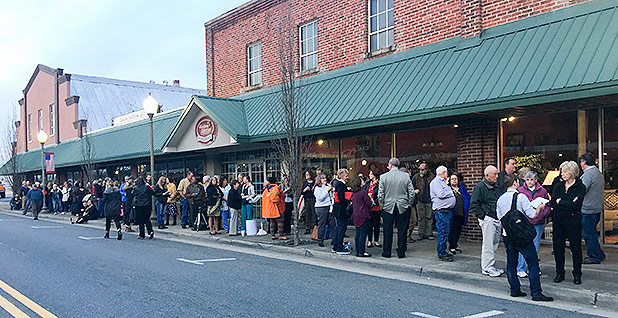 Crowd outside the Blackstone Herb Cottage, a restaurant and event space in Blackstone, Va., for an event with Republican Rep. Dave Brat. Photo by Kellie Lunney.

BLACKSTONE, Va. — A conservative Virginia Republican said he supports some U.S. EPA efforts and believes the climate is changing during a boisterous town hall last night in a rural part of the state.

"I think we all stand behind the most important work the EPA does, which is to give us a clean environment, air, water," said Rep. Dave Brat, in response to a constituent’s question.

That remark sparked some initial applause from the standing-room-only crowd of more than 100 people, including protesters inside and outside the venue who interrupted the meeting several times. "I think everyone in this room wants clean air, clean water, so we’re all for that," he added.

But then the congressman, heavily criticized for a remark he has since taken back in which he said women were "up in my grill" over plans to repeal former President Obama’s health care law, quickly lost that temporary reprieve.

"Rich people, it turns out, like clean air and clean water," said Brat, tying a safe environment to a strong economy. Boos quickly drowned out the congressman, who has a doctorate in economics and repeatedly touted his economic credentials throughout the town hall.

Brat has supported several resolutions in the House that would overturn Obama-era rules affecting energy and the environment, including venting and flaring standards to reduce methane emissions, key land-management planning regulations, and predator-killing measures in national wildlife refuges in Alaska (Greenwire, Feb. 20).

During last night’s event, Brat touted as a measure of economic progress the 13 resolutions the House has passed using the Congressional Review Act to overturn the previous administration’s regulations.

"The stock market is going like ‘zing!’" he said, adding that "if you want to know why D.C. is out of control, unelected bureaucrats are making rules and regulations on everything," a line that is a frequent Republican talking point.

Another town hall participant asked Brat whether he denies climate change. "No," Brat replied, quipping that "the climate changes all the time." Many people at the event were not happy with what they interpreted as a glib answer to the question, with some shouting, "It’s not funny."

The congressman, who defeated then-House Majority Leader Eric Cantor (R) in 2014, was one of many Republican lawmakers facing frustrated protesters and sharp questions at town halls across the country this week during the Presidents Day recess.

Those protesting Brat’s positions on issues ranging from the environment to repealing Obamacare held signs during the town hall, some of which read "Disagree" or "Lie." Others played "Brat Bingo" on flyers that featured frequent Brat phrases, including "fake news" and "data guy."

While last night’s event was the first in-person town hall Brat has held since the November presidential election, he’s done a few virtual town halls. And his spokeswoman Juliana Heerschap said Brat has done roughly 30 similar in-person events since he was elected.

Yesterday’s town hall took place in Blackstone, a new part of Brat’s district as of the 2016 election due to redistricting. It’s in the southwestern part of the state, an hour’s drive away from the 7th District’s more heavily populated Richmond area.

Many constituents, both Brat supporters and those who oppose his policies, drove at least an hour to attend.

Nancy Parrish, who lives in the Richmond area, said she came to the town hall because Brat "doesn’t represent our views" and she was "very concerned that the things we value like health care for all Americans and the environment are in danger."

Bonnie Finnell, standing next to Parrish in the long line waiting for the event to begin, agreed. "I think one of our No. 1 problems is global climate change, and if something isn’t done, none of us will be here much longer," Finnell said.

But Brat clearly had supporters, some of whom dubbed themselves the "Brat Pack," at the event.

"He’s open to speaking with anyone, and he’s a tea party-type person, which appeals to me," said Bob Charlton, who worked on Brat’s 2014 campaign and drove to Blackstone from Richmond to support Brat yesterday.

"He really isn’t a hard-core Republican or Democrat. He’s Dave Brat, and the authenticity of that we both like," Charlton said, referring to his wife, Jan, who was in line with him. "I think he is a big believer in the environment, just not in the same way the Democrats would approach it."

Jan added, "He is definitely for the Constitution, and very well-educated with the economics of the government."

A trio of women standing in line, including a retired teacher and a retired nurse, were also there to support Brat. "We love everything about him," said Janet McDonnell, the retired teacher, who traveled from Culpeper, Va. McDonnell cited national security "in regard to immigration" and the national debt as the two policy issues that concern her the most.

After the event, which lasted more than an hour, Brat told reporters that people’s "anxiety is real," and that they are looking for policy solutions.