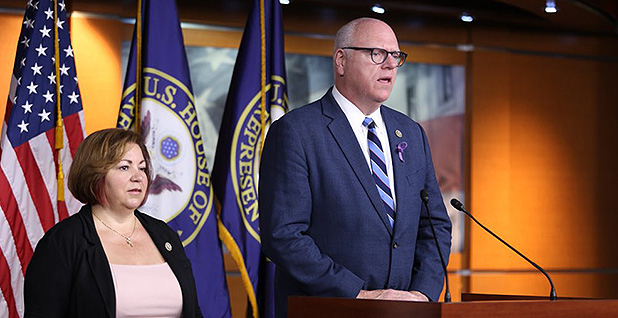 In an upset few people would have predicted even 24 hours ago, New York Rep. Joe Crowley (D) lost his primary last night, a blow to the party establishment sure to ripple through the midterm cycle.

Alexandria Ocasio-Cortez, 28, declared Crowley out of touch on issues of race, inequality and social justice in the New York City district.

Ocasio-Cortez rode a wave of local excitement, bolstered by support from national progressives, even as Crowley and his allies outspent her by massive margins. The challenger led 58 to 42 percent when the race was called.

In a statement, Crowley congratulated Ocasio-Cortez and called for party unity against the Trump administration.

Crowley, the No. 4 Democrat in the House, was seen as a likely successor to Minority Leader Nancy Pelosi (D-Calif.) as House party leader.

His challenger used his leadership role to bash him as improperly progressive and not aligned with a district with a majority of minority voters.

Ocasio-Cortez, who is expected to win the seat outright in November, will become the youngest woman ever elected to the House.

Rep. Dan Donovan defeated former Rep. Michael Grimm in the 11th District GOP primary. Grimm was trying to reclaim his old seat after a stint in federal prison and had run an aggressive campaign openly mirroring that of President Trump.

Trump, though, endorsed Donovan, who was ahead 62 to 36 percent when the race was called. The president tweeted that Donovan was needed in the swing seat.

Democrats think that nominee Max Rose, an Army veteran and party favorite, has a good chance of flipping the seat.

Rep. Elise Stefanik (R) in the 21st District, which includes much of northern New York and the Adirondacks, will face former St. Lawrence County official Tedra Cobb (D), who won the primary easily.

And in the 1st District, Rep. Lee Zeldin (R) will likely see a competitive race from business executive Perry Gershon (D), who has poured his own money into the race.

In another sign of progressive power, Dana Balter crushed party-picked Juanita Perez Williams in the 24th District’s Democratic primary. She faces Rep. John Katko (R), who is not in the Climate Solutions Caucus.

The race is key for environmental groups, and Polis is a favorite. A plan to power the state entirely on renewables by 2040 is central to his campaign, and he has built a reputation as a staunch environmental ally on the Hill.

He will face Colorado Treasurer Walker Stapleton, who ran away with the GOP nomination. He beat former state lawmaker Victor Mitchell 49 percent to 31 percent.

Stapleton, a cousin to the Bush family, has statewide name recognition after winning two terms as treasurer and has strong ties to GOP donors. He promises to be a friend to the state’s oil and gas sectors.

In the 6th District, Republican Rep. Mike Coffman is seen as one of the most vulnerable GOP incumbents in the nation. He will face attorney and veteran Jason Crow (D), who beat Obama-era energy official Levi Tillemann 68 to 33 percent.

Overshadowed by Crowley’s upset, Maryland’s Democratic gubernatorial race boasted another major win for the progressive faction of the party.

Jealous called his race a "people-powered grass-roots campaign." He took about 40 percent of the vote, with Prince George’s County Executive Rushern Baker trailing by nearly 10 points. Several other candidates were registering at single digits when the race was called.

Jealous, who proposed a number of ambitious policies such as universal health care, has become a favorite of national progressives, including Sens. Kamala Harris (D-Calif.), Cory Booker (D-N.J.) and Sanders (I-Vt.). Greens also like him, including 350.org and Friends of the Earth Action. He also won more labor and teacher union support than Baker.

Democrats and environmental groups are eager to flip Maryland, a blue state that voted against Trump by 26 points. But Hogan’s moderate bent and frequent criticisms of Trump have left his approval ratings high.

Hogan backed a hydraulic fracturing ban and a variety of green energy spending initiatives, while criticizing EPA under Scott Pruitt for failing to clean up the Chesapeake Bay.

Gov. Henry McMaster won a GOP gubernatorial runoff, after the president campaigned for him Monday. He defeated businessman John Warren 53 to 47.

McMaster is running for his first full term in office after replacing Nikki Haley. He failed to win a majority of the vote earlier this month.

He faces Democrat James Smith, a state lawmaker, in the general election.