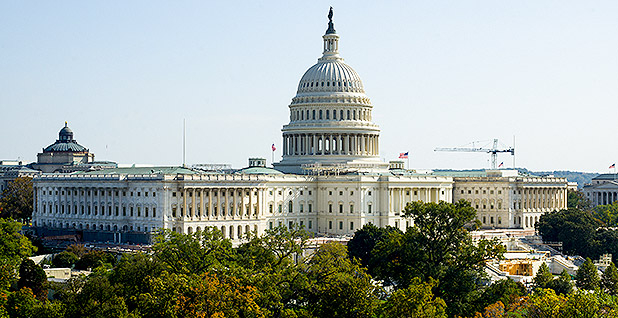 Republicans this week will be looking for common ground on tax reform and spending bills. Architect of the Capitol/Flickr

The House and Senate tax reform conference committee will meet publicly for the first time this week, as Republicans race to assemble a compromise that can pass both chambers by a slim majority.

Separately, negotiations continue behind the scenes for a budget and spending deal to avoid a government shutdown before Christmas.

Tax negotiators will meet Wednesday afternoon in a session that Ways and Means Chairman Kevin Brady (R-Texas) said will be "an opportunity for the conferees to discuss our best, most pro-growth tax reform ideas that will help improve the lives of all Americans."

He reiterated that the GOP-led Congress intends to send a bill to President Trump before the end of the year.

The president himself said negotiations were going well. "Getting closer and closer on the Tax Cut Bill," he wrote on Twitter yesterday.

"Shaping up even better than projected. House and Senate working very hard and smart. End result will be not only important, but SPECIAL!"

Despite Trump’s optimism, the House and Senate are struggling to balance key differences between the chambers, including changes to state and local tax and mortgage deductions.

Highlighting the challenge, Sen. Susan Collins (R-Maine), who said leaders promised her a vote on separate legislation to stabilize health care markets as a way to encourage her to back the Senate tax reform bill, said yesterday it was too early for her to commit to the final product.

"There are major differences between the House and Senate bills," she said on CBS’s "Face the Nation" yesterday. "And I don’t know where the bill is going to come out."

Senate Democratic conferees, who have harshly denounced the GOP-led process and expect to have no say on the final bill, outlined a list of conditions for the conference, including three open meetings, budget estimates and the opportunity to offer amendments.

Negotiators are under immense pressure to maintain the current corporate rate at 20 percent, even though Trump himself has suggested it could rise to 22 percent at the end of the day.

A coalition of small-government conservative groups noted Friday that the 20 percent rate is the "primary reason for our enthusiastic support of tax reform."

"We strongly urge the conference committee to report a tax cut bill with this exact rate cut," wrote Americans for Prosperity, Freedom Partners, Americans for Tax Reform and other like-minded organizations.

The pressures to maintain the final bill’s total cost within the limits allowed under the process of budget reconciliation adds another layer of pressure on conferees as they sort out a number of lower-tier energy issues.

The House’s decision to reopen the terms of a 2015 tax deal that extended key renewable breaks, as well as other energy provisions, ensures those will be sticking points in the talks.

For instance, the House bill reduces the value of the renewable production tax credit by nearly a third, for $12 billion in savings (E&E Daily, Nov. 3).

The Senate bill is largely silent on energy issues, which senators had hoped to handle through a separate tax extenders package whose prospects are also unclear (E&E Daily, Dec. 6).

Despite all the past controversy over opening the Arctic National Wildlife Refuge to oil and gas drilling, Alaska lawmakers say they are confident the Senate’s provision doing so will endure through the conference.

Nonetheless, environmentalists are looking to pressure moderate House Republicans, including members of the bipartisan Climate Solutions Caucus, to oppose the final bill.

Climate Hawks Vote is running digital ads in the districts of GOP members of the caucus demanding they vote "NO on the tax scam bill."

Congressional leaders and the White House this week hope to make headway on setting up a framework for a broad budget deal.

Negotiators are focused on a two-year accord that would ease strict discretionary spending caps set by the Budget Control Act of 2011.

The law triggers automatic reductions, known as the sequester, if Congress fails to meet the funding levels set by the Obama-era law.

Since the sequester was first created, lawmakers have regularly revised it to provide one or two-year spending increases.

If they are able to do so again, it would pave the way for a broad omnibus spending package for fiscal 2018 early next year.

Republicans have floated a plan that would increase overall discretionary spending by $182 billion over the next two years by increasing defense spending by $54 billion in each year and non-defense dollars by $37 billion annually.

For fiscal 2018, discretionary spending would be set at $603 billion for defense and $553 billion for non-defense.

The defense account funds the Pentagon and other national security spending, including nuclear weapons work at the Energy Department. U.S. EPA and the Commerce and Interior departments fall almost entirely under non-defense spending.

Where to set the caps was discussed at a White House budget meeting between Trump and congressional leaders, but no final decisions were made.

House Speaker Paul Ryan (R-Wis.) last week declined to weigh in on the caps, but he did say making sure the military is adequately funded is a top priority in negotiations.

Democratic leaders, including House Minority Leader Nancy Pelosi of California and Senate Minority Leader Chuck Schumer of New York, called for "parity" in any increases in defense and non-defense spending. Pelosi last week said she would support a $54 billion annual increase in both accounts.

Lawmakers hope to have the framework settled by Dec. 22 when current stopgap spending, known as a continuing resolution, expires.

Congress would then pass another CR extending into January or February to buy lawmakers time to assemble most, if not all of 12 fiscal 2018 spending bills into an omnibus package.

There’s bipartisan support for attaching emergency spending for hurricane and wildfire relief to the CR later this month. The administration has sought $44 billion in disaster aid; lawmakers from both sides expect it to be higher.

House conservatives meanwhile, want to attach a new fiscal 2018 spending bill to the CR in a bid to allow for a Pentagon increase without having to link it to new domestic spending.

That idea however, may not fly in the Senate, where Democrats have the votes to filibuster any spending legislation.