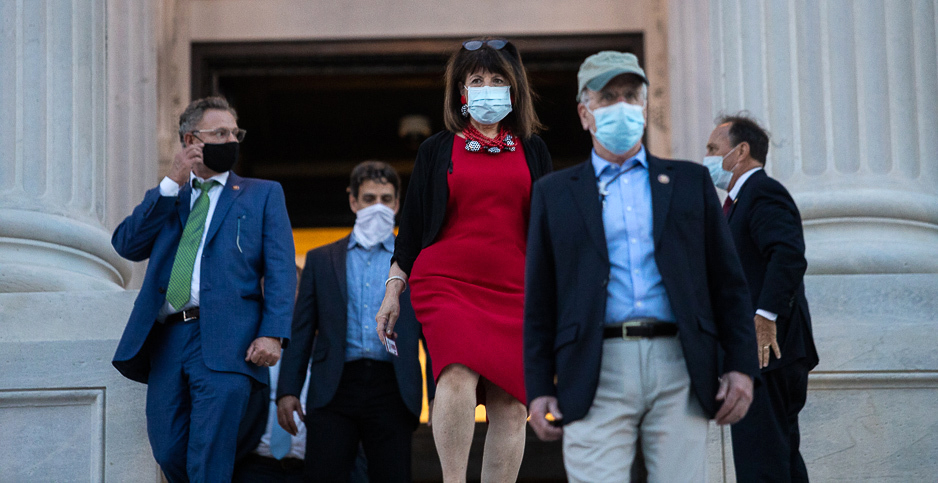 A group of masked House lawmakers outside the chamber during a session earlier this month. The House will be back today to consider national security legislation and more pandemic-related bills. Francis Chung/E&E News

With deadlines for must-pass infrastructure and spending bills lining up and a shrinking election-year calendar, House Democratic leaders are looking to committees to quickly get up and running under remote voting procedures that were approved earlier this month.

House Majority Leader Steny Hoyer (D-Md.) yesterday laid out an ambitious summer agenda. In addition to the annual 12 spending bills, plans include the Water Resources Development Act and a highway reauthorization bill, as well as the National Defense Authorization Act, which traditionally is a magnet for environmental policy fights.

But Hoyer acknowledged that uncertainty over scheduling due to the ongoing COVID-19 pandemic will complicate the prospects for the work ahead, much of which is already behind schedule.

"I am focused very, very much on the committee actions," Hoyer told reporters on a conference call yesterday. "We are urging committees to get product done. We need product."

Hoyer said, "You are talking about 14 or 15 bills they need to be worked on by the committees and reported out, so that will dictate what we decide will be our general schedule going forward."

The House Transportation and Infrastructure Committee has said its water projects and highway bills will emerge soon. In the Senate, the Environment and Public Works Committee has already approved both.

On the NDAA, the Senate Armed Services Committee said it would mark up its version in two weeks. The House has yet to release a timeline.

The House is scheduled to vote today and tomorrow, but next week’s schedule is up in the air pending conversations with committee chairs, Hoyer said.

The House will vote this week to renew foreign surveillance activities; to disprove an Education Department regulation under the Congressional Review Act; and for bipartisan legislation, H.R. 6886, that aims to ease business eligibility for the Paycheck Protection Program enacted in March to help small businesses weather the pandemic’s fallout.

Hoyer also said House Democrats are ready to launch talks with the Senate on another round of COVID-19 stimulus, although Senate Republicans have called for a pause on legislating more relief until the effects of the trillions of dollars enacted so far have been assessed.

Senate Majority Leader Mitch McConnell (R-Ky.) told reporters in Kentucky yesterday that more stimulus may be needed but that it would not resemble the House’s $3 trillion bill passed earlier in the month.

"So many of you are asking, ‘What next?’ I think there’s likely to be another bill; it will not be the $3 trillion that the House passed the other day, but there’s still a likelihood that more will be needed," McConnell said, according to NBC News.

While House Speaker Nancy Pelosi (D-Calif.) has called for a massive green infrastructure package to be part of the congressional response to the pandemic, that effort has repeatedly been delayed as public health needs and economic assistance have grown (E&E News PM, April 1).

Clean energy and environmental provisions were also absent from the $3 trillion "Health and Economic Recovery Omnibus Emergency Solutions (HEROES) Act" passed by the House earlier this month, but advocates continue to press their case as the recession strikes the renewables and efficiency sectors.

The Sierra Club yesterday released a report detailing a plan it said would create 9 million jobs annually for a decade while lowering carbon emissions 45% by 2030.

That plan includes hiring nearly a million workers each year to upgrade public housing and buildings, water infrastructure and public lands. It could also create 190,000 jobs annually by closing and remediating orphaned oil and gas wells — at a cost of $60 billion over five years.

The plan also calls for investing $41.5 billion over five years to extend tax credits for clean energy sources and efficiency, including tweaks to make those incentives refundable and to extend the safe harbor construction requirements.

The proposal additionally includes a program to fund the exchange of gas guzzlers for cleaner cars — an idea that Congress has previously embraced during tough economic times and one that Senate Democrats signaled last year they would revive again (E&E Daily, Oct. 25, 2019).

"With unemployment approaching Great Depression levels, now is the time for Congress to take bold action to put millions of people back to work building a healthier, more just future for all," said Ben Beachy, director of the Sierra Club’s Living Economy program, in a statement.

This week’s House activity follows a party-line vote earlier this month to allow proxy voting in committees and on the floor (E&E Daily, May 18).

But House Republicans have made their opposition to remote work a major talking point and yesterday announced a lawsuit against it.

"I just filed a lawsuit in federal court to overturn Speaker Pelosi’s unconstitutional proxy voting scheme," Minority Leader Kevin McCarthy (R-Calif.) tweeted. "It could allow as few as 20 Representatives to control the votes of 220. This is NOT the representative democracy our Founders envisioned or what our Constitution allows."

Pelosi responded: "House Republicans’ sad stunt shows that their only focus is to delay and obstruct urgently-needed action to meet the needs of American workers and families during the coronavirus crisis."

"We must lead by example," Jordan said. "States are opening up. Congress should get back to work."

Hoyer noted that there are House members with health problems and who must fly long distances to reach Washington.

Additionally, Hoyer pointed out that the nation’s capital continues to be a COVID-19 "hot spot," which he noted was a concern of the attending physician of the U.S. Capitol.

Hoyer also dismissed criticism from McConnell about the House’s absence in recent weeks, noting that the Senate leader has "ignored" the advice of health experts by keeping that chamber in session.

He also dismissed as "disingenuous" McConnell’s suggestion that House proxy voting runs afoul of the Constitution, alleging that the Senate’s use of unanimous consent to pass legislation amounts to the same practice, with 98 senators absent.

"They have one person in the chair and one person on the floor," Hoyer said. "They call that unanimous consent. But what that means is two people are voting for the 100."

"It’s ludicrous, in my opinion, to assert that member A has to be in a specific physical place to cast their vote on behalf of the American people," he said, "or at least the 750,000 that they represent."