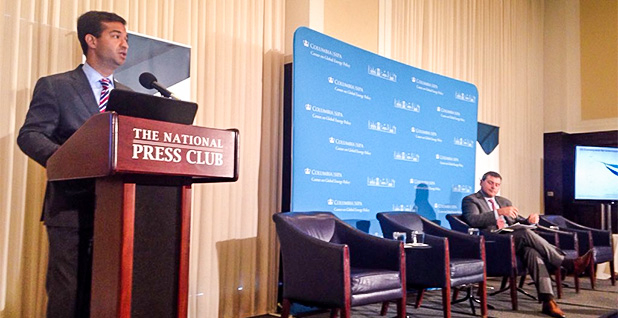 Rep. Carlos Curbelo rolled out the first Republican carbon pricing bill in nearly a decade this morning, a rare political risk that quickly earned rebukes from conservatives and tepid praise from environmental groups.

The legislation has been floating around behind closed doors for weeks, but Curbelo has been mum on the details. The final proposal would put a $24-per-ton tax on carbon, with 70 percent of the revenue going to the Highway Trust Fund.

At an event at the National Press Club this morning, Curbelo pitched the proposal as an infrastructure bill that would address climate effects specific to his South Florida district, including sea-level rise, saltwater intrusion and coral bleaching.

The "MARKET CHOICE Act" "recognizes the cost of carbon emissions while at the same time repealing the regressive, discriminatory gas tax," Curbelo said at the event, sponsored by the Niskanen Center and Columbia University’s Center for Global Energy Policy.

As expected, the bill is a middle-ground approach aimed at pleasing environmentalists and center-right groups pushing for climate solutions, and it earned a mixed bag of praise from both.

The bill would, for example, slap a rolling moratorium on EPA’s Clean Air Act regulations on greenhouse gases but would not totally eliminate them, as some right-leaning groups have called for.

It would scrap the federal gasoline tax to help offset potential rises in fuel prices and provide a new source of funding for highways and other infrastructure.

Outside of the Highway Trust Fund, 10 percent of revenue would go to grants for low-income households, and another 5 percent would be doled out to coastal mitigation projects.

The bill "is the latest sign that momentum continues to build for a market-based solution to lower carbon emissions," said Greg Bertelsen, senior vice president at the Climate Leadership Council, whose founding members include energy companies and influencers.

"This legislation is an important milestone for conservative leadership on climate policy and an encouraging response to growing public demand for a breakthrough solution," Bertelsen said.

Curbelo said he would pitch the White House on the bill as a potential way to fund President Trump’s infrastructure plan, which has stalled in Congress and become a recurring joke around Capitol Hill.

But with the measure set for a formal introduction this afternoon, conservatives have already started campaigning to kill it.

Americans For Tax Reform held an anti-carbon-tax news conference down the hall at the National Press Club immediately after Curbelo’s event.

ATR President Grover Norquist largely talked around the scientific consensus on climate change, instead arguing that Curbelo’s bill would be devastating for the economy while doing little to reduce emissions.

Paul Blair, the group’s president of strategic initiatives, called the bill "an earmark for left-wing activists."

"Some people will lose their jobs," he said. "These are not our claims, but admissions by Congressman Curbelo and proponents of this bill."

Norquist added that conservatives are looking to get out ahead of Curbelo and gin up opposition to his bill before it gains momentum. The bill is not about carbon emissions, he said, but about putting more taxes on the American people.

"All of the stuff about why isn’t important," he said. "It’s just that they want more money again."

Columbia researchers, who worked with Curbelo on economic modeling for the bill, say the proposal would indeed have a small negative effect on U.S. annual gross domestic product in the 2020s.

It would also jack up per-capita energy expenditures by $275 in 2020 and cause gas prices to rise by "less than 10 cents per gallon," according to an analysis of the bill.

Norquist called those findings a "signed confession" of the potential negative effects of the bill.

At the same time, the proposal could reduce greenhouse gas emissions by up to 40 percent by 2030, and lower-income households would actually benefit from the new grant program, researchers found.

"The bill would set the United States on a path to reduce carbon emissions and not only fulfill but exceed the commitments set out under the Paris Agreement," said Curbelo.

Even though reactions from environmental groups have been mixed, most of them praised Curbelo for his effort to join the conversation.

"It won’t cut heat-trapping pollution fast enough. It should invest far more in emission-reducing energy efficiency, renewable power, and electric vehicles," he said in a statement.

"And it seeks to preempt using the Clean Air Act to cut our carbon footprint," Doniger said. "We must deploy all available tools, not limit them as this bill does, to head off the worst damages from climate change."

Curbelo this morning pushed back against that kind of criticism. Ultimately, he said, the bill is an effort to reach across the aisle, even if it won’t pass during this session of Congress.

"This bill is open for amendment," he said. "This is not a leave-it-or-take-it bill."

As for the potential political risk, the Floridian said he isn’t worried.

Curbelo is widely seen as vulnerable in November. Conservatives yesterday predicted political downfall for Curbelo and Democrats who support the proposal, pointing to Democratic losses in the 1994 midterms after President Clinton’s proposed British thermal unit tax, as well as the downfall of the Waxman-Markey emissions trading bill in 2009.

But Curbelo said he hasn’t seen any blowback yet in a purple district that’s already feeling some effects of climate change. He added that he expects to have co-sponsors when the bill text is unveiled this afternoon.

"Anytime that you take a bold step or file a meaningful proposal, there are risks associated with that," he said. "But if I’m not taking risks, I don’t want to be in Congress."

Even though Americans For Tax Reform is against Curbelo’s move, Norquist is also keen on tying the climate and carbon tax issue to its more common constituency: Democrats.

Many candidates on the left have not been focusing their campaigns on environmental issues. This morning, for example, House Democratic Whip Steny Hoyer of Maryland delivered campaign remarks about the economy and infrastructure.