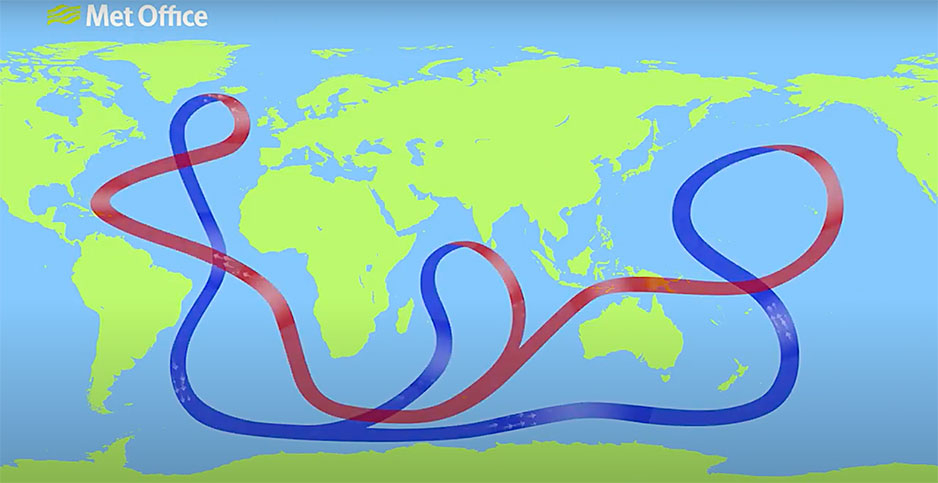 The Atlantic Meridional Overturning Circulation is a massive ocean current that influences Earth's climate. It's moving slower now than in the past 1,000 years. United Kingdom Met Office

An enormous ocean current that flows between continents in a worldwide circuit that can take centuries to complete is slowing down, scientists say. And climate change may be partly to blame.

New research finds that the Atlantic Meridional Overturning Circulation, or AMOC — a major ocean system that ferries water and heat between the equator and the poles — is at its weakest point in more than a thousand years.

It’s no small finding. The AMOC — also sometimes referred to as the Gulf Stream system — transports heat throughout the oceans, regulating climate patterns around the globe.

Experts believe the slowing AMOC may already be causing consequences.

Some scientists believe it’s linked to a patch of persistently cold water just south of Greenland, often referred to as the "cold blob." The idea suggests that less heat is flowing into these waters as the AMOC slows.

This isn’t the first time scientists have raised the alarm about the weakening AMOC. Other recent studies also suggest that the system is slowing down.

But the new study takes it a step further. It presents multiple lines of evidence, pulled from different sources, and shows that they all point to the same conclusion.

"We just increased our confidence that this is really what happened," said lead study author Levke Caesar, a climate scientist at Maynooth University in Ireland.

To study the Earth’s ancient history, scientists must rely on proxies — forms of evidence that contain indirect information about the Earth’s climate and the movement of ocean currents in the distant past. This often includes data from ancient sediments drilled out of the seafloor or from fossilized corals that lived and died centuries ago.

For the new study, Caesar and her co-authors collected 11 different proxies, which gave them information about the AMOC’s activity over the last 1,600 years.

For instance, they analyzed the size of tiny grains of ancient sediments pulled from the ocean floor. This helped them determine how fast the AMOC was moving centuries ago, as a faster current can move larger bits of sediment.

They also picked out bits of long-dead corals buried in the ocean floor, and they noted the species that were present at different times in the past. Different types of corals prefer different water conditions.

Once they’d compiled all their evidence, the researchers conducted statistical analyses to determine how serious the slowdown really is. They found that nine of the 11 proxies show a significant change.

For most of the 1,600-year record, the AMOC was relatively stable. It first began weakening during the 19th century. Its decline sped up substantially in the mid-20th century, and it hit its slowest point within the last few decades.

These findings support the conclusions of other studies.

A paper in 2018 also found that the AMOC is probably at its weakest point in at least 1,500 years — and that most of the slowing has occurred since the 19th century. Another paper, published the same year, finds that much of the weakening has happened since the mid-20th century.

Since then, the system has slowed by about 15%.

So in one sense, the new study isn’t a surprise. On the other hand, it presents the most compelling evidence yet that other studies have been getting it right.

"There have been papers before suggesting the AMOC is now at an all-time, or at least compared to the last 1,600 years, at a low," Caesar said. "But we really just showed that all of these different data are consistent with each other."

The new study doesn’t investigate the reasons for the slowdown. But many experts believe climate change has something to do with it.

The AMOC acts like a kind of global conveyor belt, driven by changes in the temperature and density of water. Warm water flows north from the equator toward the Arctic, cooling as it goes. Cold water is denser and sinks toward the ocean floor. This cool water then travels back toward the equator, where it warms up and then speeds south toward Antarctica.

Warming could disrupt this delicate system. An increase in rain and snow in some regions, along with melting on the Greenland ice sheet, is pouring fresh water into the ocean. Fresh water is less dense than salty water and can make it harder for the AMOC to sink toward the seafloor as it flows north.

Many scientists believe this process has at least partly contributed to the slowdown.

The timeline of AMOC activity would seem to support that idea. The slowing started in the 19th century and slowed further in the 20th century, coinciding with the intensification of greenhouse gas emissions and human-caused climate change.

Climate models also suggest a link between warming and weakening. Simulations of the future Earth tend to project a continued slowing of the AMOC as the planet keeps on heating up.

Natural variabilities in the Earth’s climate could also be playing a role, some experts have noted. For now, scientists aren’t sure how much of the current slowing is influenced by natural climate cycles versus human-caused warming. It may be some of both.

Some scientists have begun to investigate just how long the current can keep slowing before it collapses entirely. It’s a dire scenario that would likely wreak havoc on climate patterns across the Northern Hemisphere.

Most experts believe that a total shutdown is not a serious possibility in the near future, although studies disagree on exactly when that tipping point might occur.

Still, continued slowing is a likely outcome in the coming decades — and that’s a concern.

Models suggest that continued slowing could cause patches of cooling around Europe as less heat is transported north. This cooling probably won’t be too dramatic, as global warming is still the stronger process, but it is potentially enough to alter some local weather patterns.

At the same time, more heat may accumulate farther south as the current slows. Water tends to expand as it warms, meaning sea levels could rise at a faster rate in places like the southern United States.

"The ocean system already has weakened, and it will continue to weaken further," Caesar said. "This adds up to a lot of weakening."