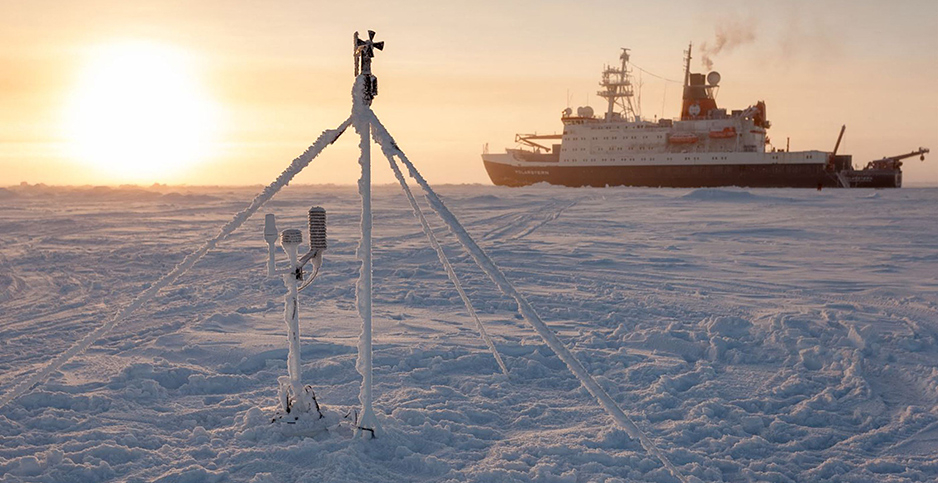 The German research vessel Polarstern as seen in this 2015 file photo of an expedition into the central Arctic Ocean. Abaca Press/Abaca/Sipa USA/Newscom

The largest Arctic science expedition in history came to a close yesterday, as the German research vessel Polarstern sailed into the port at Bremerhaven, Germany.

The Polarstern spent the past year drifting across the Arctic Ocean, frozen into the sea ice at the top of the world. As it floated across the central Arctic, scientists on board collected myriad data on the Arctic climate system — its clouds, atmosphere, ocean physics and biology, to name a few.

Spearheaded by the Alfred Wegener Institute in Germany and known as the MOSAiC Expedition — short for Multidisciplinary Drifting Observatory for the Study of Arctic Climate — the mission involved collaborations from hundreds of scientists at research institutions around the world.

The mission sought to provide an unprecedented opportunity to study the rapidly melting Arctic, currently one of the fastest warming parts of the globe, for a full year from the inside out.

"I can honestly say it has been a historic milestone for Arctic research," Markus Rex, a scientist at the Wegener Institute and the leader of the MOSAiC Expedition, said at a press conference. "And we come back with a pool of data and samples that will change Arctic research for a long time."

The mission wasn’t without its challenges.

First, the Polarstern had to find a suitable ice floe to use as its primary research base — a chunk of ice sturdy enough to anchor the ship and to support all the research equipment the scientists needed to use. Finding the right floe proved easier said than done.

Once the ship was frozen in place, scientists on the Polarstern had to contend with roving polar bears; dangerous shifts and cracks in the ice; extreme cold; and the long, dark monotony of polar night, a period during winter when the sun doesn’t rise at all in the central Arctic.

The expedition also has contended with reports of sexism and sexual harassment on board a support vessel that assisted the Polarstern during the first six weeks of the mission (Climatewire, Sept. 8).

Travel restrictions and mandatory quarantines interrupted a personnel exchange originally planned to take place by aircraft. The exchange ultimately took place by sea, with the Polarstern forced to temporarily leave its home floe to conduct the swap.

The pandemic also interrupted a series of research flights scheduled for earlier in the spring after a member of the flight team tested positive for the virus (Climatewire, March 23).

Despite the trouble, the mission was able to continue as planned.

The expedition’s conclusion comes at the end of a historic season for the melting Arctic. This summer was marked by unusually high temperatures and low sea ice extent, particularly along the Russian coastline.

In September, as the Polarstern was cruising home, Arctic sea ice cover hit its second-lowest extent in recorded history. The record-breaker was in 2012.

Scientists hope MOSAiC data will help researchers better understand the ways the Arctic is changing and the reasons it’s shifting so rapidly.

The expedition also observed, firsthand, the thinning and melting of the Arctic sea ice.

"You just need your eyes to see that the Arctic ice is dying," Rex noted.

"It’s a region of unique beauty," he added. "And we should do everything we can to preserve this region and use the small chance we still have to preserve it."