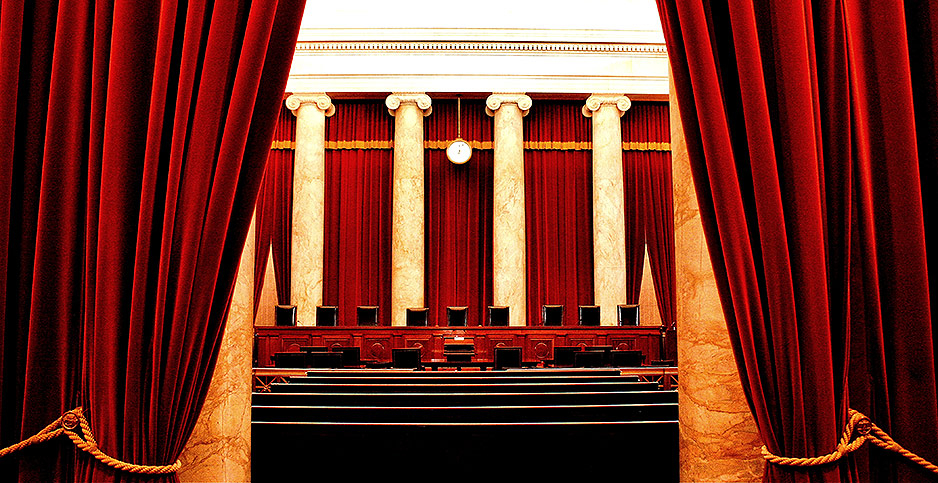 On environmental law, the latest Supreme Court term was "the calm before the storm." Phil Roeder/Wikimedia Commons

In the latest case, justices on Wednesday handed a partial victory to Florida in the long-running Southeastern water wars over the Apalachicola-Chattahoochee-Flint River Basin.

They also decided the correct legal venue for a key Clean Water Act battle and split on extending Washington tribal treaty fishing rights to salmon habitat. Otherwise, not much.

But while the term may have been somewhat sleepy for environmental issues, Justice Anthony Kennedy’s surprise retirement — announced just a few hours after the court issued the Florida v. Georgia decision — has rocked the environmental law world.

This past term was "the calm before the storm," said Robert Percival, director of the environmental law program at the University of Maryland Francis King Carey School of Law.

Not only will there be a fierce confirmation battle on Capitol Hill to replace the moderate justice, but the Supreme Court has several environment-related matters already on its docket for next term, including the court’s first Endangered Species Act case in more than a decade.

Depending on when the new justice is confirmed, he or she could have a hand in deciding the outcomes of those cases.

Senate Majority Leader Mitch McConnell (R-Ky.) is aiming to have a new justice in place for the fall term of the Supreme Court, though Democrats are seeking to delay the confirmation process until after the midterm elections.

In the past term, which began in October 2017 and wrapped up this week, the court heard and decided 63 cases.

Blockbuster rulings and orders on President Trump’s travel ban dominated the discourse. The court also heard cases on whether a baker can decline to make a cake for a gay couple, public-sector union fees, gerrymandering, internet sales taxes and cellphone data privacy.

The dearth of explicit environmental law cases this term follows a trend that has pervaded Chief Justice John Roberts’ tenure.

"It doesn’t think there’s anything special about the environmental context in which these cases arise," he said.

Still, there were a few. Of note, the court heard two major disputes pitting states against each other over water rights.

The cases are part of a trend of more interstate water fights making their way to justices. Such fights are often long and expensive, involving thousands of pages of records and trials with witnesses.

"What both cases signify is that water issues are becoming increasingly important, and we’re going to see more of these disputes between states," Percival said.

In Florida v. Georgia, Florida has argued that Georgia’s excessive water consumption in the disputed Apalachicola-Chattahoochee-Flint River Basin has caused it ecological and economic harm, including through the 2012 collapse of the region’s oyster fishery.

A court-appointed special master last year recommended that the Supreme Court throw out Florida’s claims because the state couldn’t prove, without the involvement of the Army Corps of Engineers in the litigation, that a cap on Georgia’s consumption would lead to more water flowing across its borders.

But the high court on Wednesday found that Florida had made a "legally sufficient showing" supporting a cap. Justices sent the case back to the special master for further review.

Staying true to form, Kennedy ended his Supreme Court career by siding with the majority in the 5-4 decision, which did not fall along ideological lines. Justice Stephen Breyer of the court’s liberal wing wrote the opinion for the majority, while Justice Clarence Thomas of the conservative wing wrote a dissent.

"Both sides, the majority and the dissent, had clearly reviewed the record itself, enough though they disagreed with what it showed," said Bart "Buzz" Thompson Jr., a professor at Stanford Law School and of counsel at O’Melveny & Myers LLP, who has been involved in several interstate water disputes.

"They both took this as a very important, serious matter. It’s probably one of the reasons why this was one of the last cases to actually come down from the Supreme Court."

The other interstate water battle pitted Texas against New Mexico. Texas claims that New Mexico water users are siphoning off water from the Rio Grande before it crosses into the Lone Star State in violation of a 1938 compact governing allocations.

The dispute in front of the Supreme Court this term involved whether the United States could also bring claims against New Mexico. In March, justices unanimously agreed to let the federal government step in and bring claims under the compact.

The court this term also put a cap on a dispute between Montana and Wyoming over the Yellowstone River Compact, ordering Wyoming to pay more than $100,000 for shorting Montana its fair share of water from the Tongue River.

"In the past, if you got an interstate water opinion or decision out of the court every couple of years, that would be fairly frequently," Thompson said. "This year, you have two opinions and a final decision."

Florida v. Georgia is especially important, he said, "because it shows that in fact there are no parts of the country that are any longer immune from water shortages and the importance of interstate water allocations. We’re used to these sorts of things in the western United States."

The cases in part tested the extent to which the federal government should be involved in interstate water disputes at the Supreme Court. The government can be either a potential obstacle to resolving a dispute, such as in the Florida case, or a necessary party.

In Texas v. New Mexico and Colorado, though, justices were clear that their decision was narrow and should not be read as an invitation for the federal government to wade into other disputes.

The two cases together show that the court "wants to resolve interstate water disputes in a way which permits the rivers to be managed effectively," Thompson said.

The high court this term ruled that challenges to the Obama-era Clean Water Act belong in federal district courts, not federal appellate courts.

While not a flashy decision, the unanimous ruling has affected ongoing litigation over the rule in the lower courts and will decide where challenges to the Trump administration’s replacement rule play out.

In a case that Kennedy sat out, the court also affirmed by a 4-4 split opinion an injunction forcing Washington state to repair or replace hundreds of culverts that are blocking salmon from reaching upstream habitat. Lower courts had found that the blocked culverts violated tribal treaty fishing rights stemming from the 1850s.

Other cases ended up as duds for the environment.

Clean Water Act litigants had been closely watching a criminal sentencing case that could have provided some clarity on how lower courts interpret fractured 4-1-4 Supreme Court decisions. Such a decision — the 2006 opinion in Rapanos v. United States — has muddled water policy for more than a decade.

But the court declined to wade into the issue, instead confining its opinion to the question of whether plaintiffs in criminal trials are eligible for retroactive sentencing relief. Kennedy, whose concurring opinion in the Rapanos case formed the basis for the Obama administration’s Clean Water Rule, delivered the opinion for the court.

The court found that the Securities and Exchange Commission’s manner of appointing administrative law judges was unconstitutional. The reach of the court’s decision is still unknown, but it could affect other federal agencies, including EPA, with in-house judges.

In Murphy v. National Collegiate Athletic Association, the high court struck down a federal law prohibiting states from allowing sports betting based on the "anti-commandeering" principle in the 10th Amendment.

The decision could be used in fights over any federal efforts to strip away power from California water regulators, or any Trump administration attempts to assert federal authority to stop states from taking coal or nuclear plants offline, Richard Frank, a law professor at the University of California, Davis, wrote in a recent blog post.

"Murphy is the Supreme Court’s most important federalism decision in decades," Frank wrote. "And Murphy promises to have legal and policy implications extending far beyond sports gambling — including for environmental law and policy."

The Supreme Court has already granted review in a number of environment- and property rights-related cases.

The Supreme Court has also expressed interest in cases involving California’s foie gras ban and a fight over wind development on tribal land in Oklahoma. Several other petitions are pending in front of the Supreme Court, which takes up cases that get votes from four justices.

Other issues are percolating. Environmental law experts say the court will likely step into the issue of whether discharges through groundwater should be regulated under the Clean Water Act.

Several recent cases in the circuit courts have looked at the question, including in the 9th U.S. Circuit Court of Appeals, which ruled in February that Maui had violated the Clean Water Act for more than three decades by not obtaining a National Pollutant Discharge Elimination System, or NPDES, permit for injecting contaminated wastewater into wells that traveled via groundwater to the Pacific Ocean.