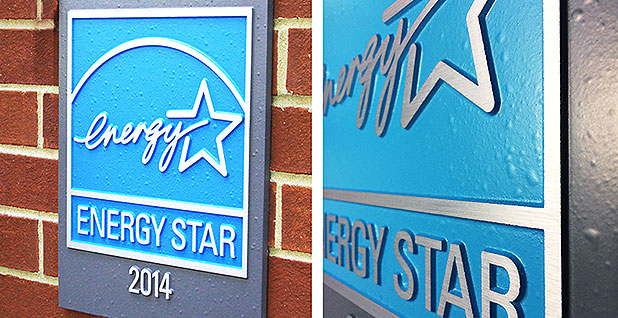 Users of the Department of Energy's Energy Star program say cutting it would be a major loss. Photo courtesy of DOE.

The Trump administration’s plan to close out or privatize the Energy Star program could upend how dozens of local agencies measure the efficiency of tens of thousands of buildings.

Energy Star is best known for its labeling of energy-efficient products and appliances, but it also runs a national system for grading building efficiency.

The Energy Star Portfolio Manager is run by U.S. EPA but uses data collected in the U.S. Energy Information Administration’s countrywide survey of buildings to determine average energy and water use. Real estate owners can then plug in their own data to compare themselves to the national average. Scores range from 1 to 100, with 50 being the average. Engineers can independently verify high scores for buildings that want to earn a special label.

Many major cities have ordinances requiring buildings to measure their efficiency using the Energy Star Portfolio Manager, according to the Institute for Market Transformation (IMT), a nonprofit that focuses on building efficiency.

The localities typically make data public so that residents and businesses renting properties know what kind of deal they’re getting.

"There isn’t a private-sector alternative," said Julie Hughes, director of building performance policy at IMT. "What makes it so unique and so technically sound is that it’s informed by a massive amount of data on buildings and appliances … the level of investment that would take is unlikely to be borne by the private sector."

New York City requires buildings to submit their information to the Energy Star Portfolio Manager and then discloses the scores to the public in a report.

"The law affords us to create our own portfolio manager, in a sense, if we needed to do so," said John Lee, deputy director for buildings in the mayor’s office.

But Lee said the city has a strong preference for being part of a national program run by the government because of the legitimacy it lends.

"It is something I always look for," said Stephanie Benedict, who works for an engineering firm in Sacramento. "Anything that uses energy, I check to see whether it’s Energy Star-rated, from water heaters to televisions to printers to computer monitors. Everything."

Benedict said she thinks an industry-run program would skew criteria and results.

"If it’s government-run, yeah, then I have some faith that it’s at least a little bit unbiased or less biased," she said.

Outside of the world of consumer products, the news also alarmed efficiency experts who count on Energy Star Portfolio Manager to collect transparent data about buildings.

Some real estate companies have big concerns about the cuts. While not all building owners love the rating system, those that invest in efficiency see Portfolio Manager scores as a way to differentiate themselves and measure their progress.

Some companies say it would be difficult for a private entity to access the data the government gets through nationwide surveys. They note any industry-run version of Portfolio Manager would likely charge participants and could be expensive.

Wishrock, a national affordable housing developer with properties in nine states, is also aiming to cut its energy and water use by 20 percent within a decade.

The company uses both the Portfolio Manager to rate its buildings and the Energy Star product labeling system to set standards for the purchases its contractors make.

"For the appliances, I don’t see a natural alternative in the marketplace today," said Chief Sustainability Officer Trisha Miller. "For us, in affordable housing work across the country, it’s the standard. And we know our contractors can find it in any market. If that were to go away, I think there would be a pretty large gap to fill by a third-party institution or rating system."

Wishrock uses Portfolio Manager to track its progress in making utility bills more affordable for renters. The company uses the information to determine what projects and upgrades are worth the investment.

"Energy Star has become a household name and brand in our industry," Miller said. "It’s embedded. It would be hard to see that dismantled."

Lowell Ungar, senior policy adviser at the American Council for an Energy-Efficient Economy, explained that the survey Portfolio Manager is based on has not been updated for many years. It is now based on 2012 figures, and Energy Star has been working to incorporate the new numbers. The program also has been trying to improve ways to submit and transmit data.

For Portfolio Manager to be useful, DOE’s Energy Information Administration will need to keep conducting its study, Ungar said. So far, it’s unclear what kind of budget cuts EIA could see (Energywire, March 7).

"In order to keep it functioning and improve it, they’re always trying to do work on it," Ungar said. "Potentially, a company could do it. The question would be will people trust the data, and would it be reliable?"