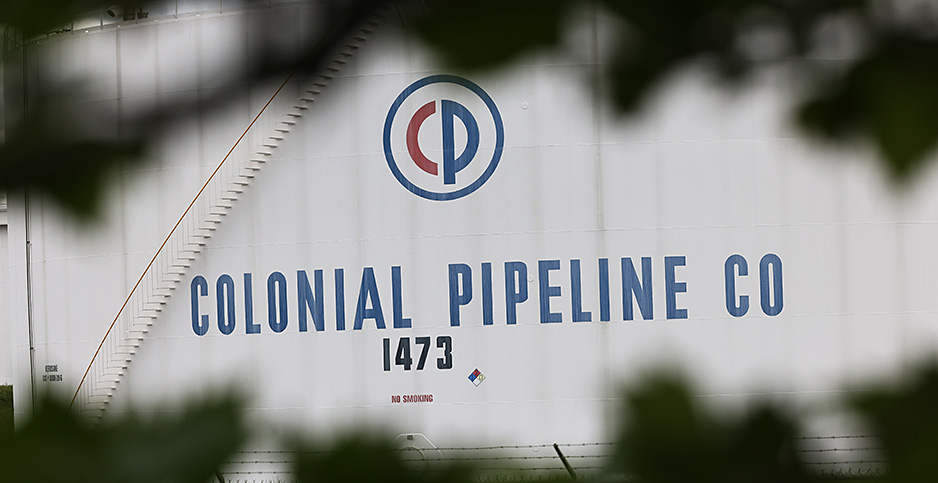 Fuel holding tanks are seen at a Colonial Pipeline Col tank farm in Woodbridge, N.J. The Georgia-based company was forced to shut down its fuel pipeline system Friday following a cyberattack by a criminal gang believed to operate out of Russia. Michael M. Santiago/Getty Images

WINSTON-SALEM, N.C. — The reality of a fuel shortage set in across the Southeast yesterday, four days after the crucial Colonial pipeline shut down because of a ransomware hack.

In some areas, gas stations that were all but vacant in the morning had lines sticking into the street by the evening rush, then shut down before the sun set.

"I’d seen it in the news over the weekend, then all of a sudden today there was the panic," said Kate Marshall, who lives in Pfafftown, outside Winston-Salem. She happened to buy gas in the morning before the rush. But later, her husband found the station around the corner was sold out and had to keep looking. On her way to a Girl Scout meeting yesterday, she saw cars lined up along the road in both directions at stations near their home.

Colonial officials yesterday offered no updated timeline for the full restoration of service, but said the company "continues to make forward progress." On Monday, the company had said it hoped to "substantially" restore service by the end of the week.

But officials warned it will take several days after a restart for supplies to get back to normal.

Colonial is the country’s largest gasoline pipeline, a 5,500-mile system that delivers nearly half of the fuel that powers the Eastern Seaboard. It runs from Houston through the Southeast to the Port of New York and delivers 100 million gallons of jet fuel, gasoline and other fuel every day.

In Washington, the Biden administration sought to seize the reins, consulting with governors, listing several actions it has taken to alleviate shortages and bringing in two Cabinet secretaries to brief reporters at the White House.

"We’re looking at every option we have across the federal government and all of the agencies," said Energy Secretary Jennifer Granholm. "But the American people can feel assured that this administration is working with the company to get it resumed as soon as possible."

Granholm and other officials pleaded with drivers across the region not to hoard fuel. Topping things off, the pipeline company’s website was down for much of the day, which the company said was unrelated to the hack disclosed Friday.

Colonial was most recently in the headlines after revealing earlier this year that the volume of a spill near Charlotte, N.C., exceeded 1 million gallons (Energywire, Feb. 25).

Colonial shuttered its system Friday when a criminal gang calling itself DarkSide locked up the company’s computer files and demanded payment for the key (Energywire, May 11).

The national average price for a gallon of gas rose about 2 cents yesterday above the day before, to $2.99, according to AAA.com. In Georgia, where Colonial is based, the per-gallon price rose 10 cents overnight. At $2.87, though, it remained below the national average yesterday. North Carolina, where Colonial has one of its largest storage facilities, saw prices jump about 5 cents a gallon to $2.87.

North Carolina, South Carolina, Tennessee, Georgia and southern Virginia get about 70% of their fuel from Colonial, Granholm said.

Other areas are less vulnerable. Along the Gulf Coast, there are other refineries. New York has enough alternate receiving terminals that fuel shortages shouldn’t be a problem, said Ernie Barsamian, head of a storage terminal clearinghouse called the Tank Tiger.

For most of the distance between Houston and New York, Colonial has two parallel main lines. One or both lines have been shut down about 30 times since 2001.

There are ways to get gasoline into the markets that are affected, but they might cost more, Barsamian said. Fuel could be trucked in from ports in Georgia and the Carolinas. And there is another major artery, the Plantation pipeline, that runs from Louisiana to near Washington and parallels Colonial in places.

The U.S. Chamber of Commerce directly asked for the administration to waive the Jones Act, which would lift some restrictions on domestic shipping. Such waivers are generally opposed by unions, a key constituency for Biden.

But yesterday, the administration announced that maritime officials at the Department of Transportation had begun evaluating whether to waive the Jones Act. And Homeland Security Secretary Alejandro Mayorkas said officials are working to have a waiver prepared should the need arise for a foreign-flagged vessel to deliver fuel between U.S. ports.

Granholm said the administration has focused on trucking fuel as the best alternative. Shifting to trains or sea transportation will face logistical hurdles such as whether there are enough of the right type of rail cars and deep enough ports, she said.

"But the pipe is the best way to go," Granholm said.

The waiver preparation and hours-of-service exemption were among several moves White House officials trumpeted as part of the administration’s strategy to head off problems. EPA is allowing some gas stations to keep selling winter-blend gasoline instead of the more expensive blend normally required in some areas to reduce smog.

For many in the policy world, the ransomware attack has raised questions about whether the federal government is doing enough to foster — and require — proper cybersecurity for crucial industries.

Mayorkas was asked whether the administration would require mandatory cybersecurity standards for pipelines and said only that conversations are ongoing "and have been underway with respect to what measures we need to take both administratively, and of course in a companion effort, the legislature, to see how we can raise the cyber hygiene across the country."

More than $350 million in losses are attributable to ransomware attacks this year — over a 300% increase from last year, Mayorkas said.

"There’s no company too small to suffer a ransomware attack," he said, adding that the Department of Homeland Security is increasingly seeing small and medium-size businesses attacked.

Mayorkas said DHS’s Cybersecurity and Infrastructure Security Agency is "in the lead in the public-private partnership in an all-of-government effort to raise the cyber hygiene of private industry."

Colonial CEO Joseph Blount expects to be in a position to make a full restart decision by the close of business today, according to Granholm, who said she’d spoken with him. She warned "even after that decision is made, it will take a few days to ramp up operations."

"This company is acting in a responsible way," Granholm said. "They took their pipeline down so that the ransomware would not spread."

Colonial said yesterday it was operating manually to deliver to some markets, prioritizing those not served by other means. The company said that in the four days it had been shut down, it delivered about 41 million gallons of fuel to different points on the line. That’s less than half what it normally delivers in a day.

And as it prepares to try to restart, the company has taken in about 84 million gallons it would be able to deploy right away.

The company also said it has increased the aerial patrols and on-the-ground inspections that help find leaks and other problems.