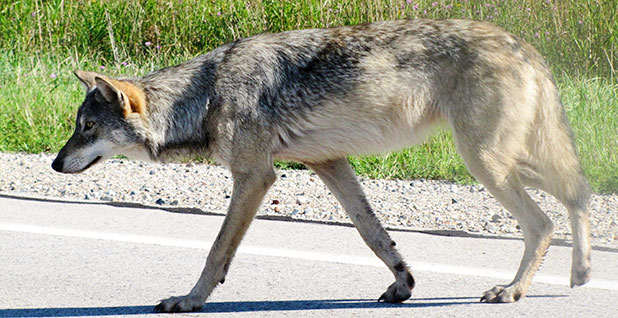 Federal appellate judges today wrestled with the question of whether the government can carve out a population of gray wolves in the Great Lakes region to remove Endangered Species Act protections for them.

During two hours of oral arguments this morning, a three-judge panel of the U.S. Court of Appeals for the District of Columbia Circuit questioned whether the Fish and Wildlife Service should focus on pockets of wolf populations that are thriving or on the entire wolf population across the nation as a whole.

"There is some powerful common sense to the notion that the lens should be a species-oriented lens," said Judge Nina Pillard, an appointee of the Obama administration.

The administration is appealing a lower court’s decision to toss a 2011 Fish and Wildlife Service rule that delisted wolves in all of Michigan, Minnesota and Wisconsin, and parts of Illinois, Indiana, Iowa, North Dakota, South Dakota and Ohio.

In the last decade, federal courts have issued a dozen orders halting the government’s efforts to remove Endangered Species Act protections from gray wolf populations in the United States.

FWS has classified wolves into different populations under the Endangered Species Act starting in 1978, when FWS listed wolves in Minnesota as threatened and separate from other wolves in the country.

Since the original 1978 listing, the Minnesota population has expanded both in number and in territory. By 1998, Minnesota wolves had expanded into Wisconsin and Michigan’s Upper Peninsula, and by 2011, the population numbered more than 4,000 wolves.

FWS has been trying to update the original listing of wolves for more than a decade. The service’s 2003 rule dividing the Lower 48 into three distinct population segments was vacated by two courts. A federal court also vacated a 2007 rule recognizing a much smaller western Great Lakes population. A 2009 rule was vacated as a result of a settlement.

The service’s latest iteration, the 2011 rule, established the boundaries of a new distinct population segment of wolves spanning nine Great Lakes states. In the same breath, the rule removed protections from the population.

Led by the Humane Society of the United States, environmentalists challenged the rule, arguing that FWS couldn’t designate a population segment under the Endangered Species Act just to turn around and remove protections. They also charged that FWS couldn’t show that wolves would be adequately protected from disease and human harm across a "significant portion" of their range without federal protections.

In an 111-page decision issued in December 2014 without oral argument, the U.S. District Court for the District of Columbia agreed, finding that the service’s delisting rule "directly conflicts with the structure of the ESA."

In arguing for an appeal of the decision today, Department of Justice attorney Joan Pepin said the Endangered Species Act clearly allowed FWS to designate and delist a segment of a population that’s part of a broader listed species.

"The statute is not even ambiguous on this question," Pepin said.

But judges questioned whether carving out a segment of the population in the Great Lakes region would have an effect on wolves in other states where they’d still be listed under the Endangered Species Act.

Protections persist for wolves in all Lower 48 states but Montana and Idaho, where Congress stepped in to delist the populations. New Mexico’s gray wolves are classified as a subspecies.

"Are we dooming the listed species to extinction in everywhere but that pocket?" Millett asked.

Instead of going through "gymnastics" to fit the wolves around the country into different population segments, Pillard several times questioned why the service wasn’t addressing wolves in a nationwide manner.

Pepin maintained throughout the morning session that other wolves would not be affected by delisting western Great Lakes wolves.

"This population is markedly separate from other populations," she said.

Retaining the framework of distinct population segments, rather than addressing wolves on a nationwide basis, would allow FWS the flexibility to address the different statuses and characteristics of wolf populations, she said.

And addressing wolf populations on a segment-by-segment basis "allows for the fact that the service doesn’t have enough resources" and helps diminish "public antagonism" against the agency, Pepin said.

But Ralph Henry, director of litigation at the Humane Society, today argued that the service’s decision could not legally name a population segment and delist it at the same time.

The designation of a population segment "needs to come with an effort to protect that entity," he said.

Along with grappling with whether FWS’s division of wolf population segments was legal, judges today also questioned the extent to which FWS has to ensure that the wolf numbers will remain robust across a "significant" portion of its range without federal protections.

FWS argues that the language in the statute requires looking at the current range of wolves. The Endangered Species Act is about "trying to combat the threat of extinction … not the restoration of the Old West," Pepin said.

Environmentalists, however, say the agency needs to ensure that wolves rebound to historical levels.

Henry, the attorney for the Humane Society, today said that just focusing on areas of the country where wolf populations are thriving currently ignored historical areas where different populations met to disperse genes.

"We can’t myopically look only at the current range," he said.

Millett appeared to agree, saying she was concerned that FWS’s "narrow focus" on the current range of the wolves seemed to run "counter" to the purpose of the Endangered Species Act.

Great Lakes states have joined the appeal in support of the government.

In a court brief, Michigan cast the lawsuit as a matter of states’ rights and warned that the district court decision "threatens the very foundation of the ESA: federal-state cooperation."

"Michigan has invested an enormous amount of resources into the management and recovery of Michigan wolves," the state said, "on the expectation that it would regain exclusive jurisdiction over wolves once they recovered."

Wisconsin also argued that, for the short period of time the wolf was delisted, its management plan didn’t substantially affect the state’s wolf population.

When the district court struck down the rule, "Wisconsin was no longer able to use lethal control to protect citizens’ livestock from wolf attacks," the state said in a court brief, "and Wisconsin taxpayers once again assumed a greater financial burden in compensating people for depredation losses."