D.C. Circuit judge’s dissents: ‘I do not choose to go quietly’ 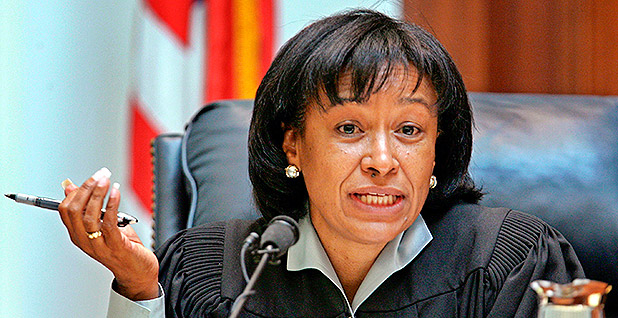 Judge Janice Rogers Brown tomorrow will step down from the U.S. Court of Appeals for the District of Columbia Circuit, depriving the court of one of its strongest conservative voices.

Brown announced in July that she would retire and not seek senior status. Her departure will allow President Trump his first nominee for the D.C. Circuit, which is highly influential in environmental law (Greenwire, July 11).

President George W. Bush first nominated Brown to serve on the D.C. Circuit in 2003, but she faced stiff Democratic opposition, and it wasn’t until 2005 that she was confirmed for the seat.

On the court, Brown has been known as a conservative stalwart. During her dozen years there, she dissented more than 40 times, often penning blistering rebukes of her colleagues’ decisions. Her dissents often highlighted her skepticism of regulation and of agencies gaining too much power.

"Judge Brown’s dissents often reflect her concern that agencies do not worry enough about whether Congress has authorized them to act," said Aaron Nielson, an administrative law professor at Brigham Young University and a former clerk of Brown’s. "Her dissents stress that just because an agency thinks something is a good idea does not mean it is lawful."

Nielson added that Brown was also frequently concerned about the government spending too much of "other people’s money" and about retroactive government decisions that punish people for doing something that appeared lawful at the time.

Here are five times Brown dissented from the majority in environmental law cases.

In 2012, Brown dissented from her colleagues’ decision to uphold Obama administration greenhouse gas regulations, raising doubt that U.S. EPA had the authority to regulate heat-trapping emissions under the Clean Air Act. At issue was a rule to regulate greenhouse gases in tailpipe emissions.

"I do not choose to go quietly," Brown said of her belief that EPA’s authority rested on "the shakiest of foundations."

Brown’s 23-page dissent addressed a petition for rehearing the case. She began by recalling spending the summer of 1974 in the Pasadena neighborhood of Los Angeles County, when the air quality was so bad, it took her a month before she realized the San Gabriel Mountains were visible from her house.

"After staying in the house more than a month and spending a restless night … I stumbled bleary-eyed into the kitchen, looked out the window, and stopped — utterly dumbfounded. There — looking like it was but a few feet beyond the back fence — stood a mountain. Not a foothill. Not an unobtrusive mesa. A mountain!"

She added, "In those days, the air in the Los Angeles basin was so thick with smog that a mountain, or even a nearby mountain range, could simply disappear."

Congress passed the Clean Air Act to deal with air pollution problems such as the smog blanketing Los Angeles. But it never meant for the law to be used to address climate change, Brown wrote.

"It was no happy accident that congressional draftsmen titled the legislation the ‘Clean Air Act,’" she said. "Ambient air quality was the point, purpose, and focus of the CAA."

She emphasized that she disagreed with the Supreme Court’s 2007 decision in Massachusetts v. EPA, in which justices found EPA had authority to regulate greenhouse gas emissions.

"At bottom, bad decisions make bad law," Brown wrote. The D.C. Circuit had "read Massachusetts to its illogical ends and it is the American industry that will have to pay."

In another recent case relating to greenhouse gases, Brown dissented from a decision faulting federal energy regulators for not considering the climate impacts of a proposed pipeline project in the Southeast.

The court found that the Federal Energy Regulatory Commission had failed to examine "reasonably foreseeable" greenhouse gas emissions that come from burning natural gas in its National Environmental Policy Act review of the project.

But Brown disagreed, writing in an eight-page dissent that her colleagues wrongly concluded that NEPA is about not only the "journey" but also the "destination." In other words, the court found that FERC is required to study both the pipeline and where gas in the pipeline ends up.

"The court blithely asserts it is ‘not just the journey,’ it is ‘also the destination,’" Brown wrote. "In fact, NEPA is a procedural statute that is all about the journey. It compels agencies to consider all environmental effects likely to result from a project under review, but it ‘does not dictate particular decisional outcomes.’"

And she wrote that the court should have rejected environmentalists’ claims in the suit because FERC doesn’t have control over whether new power plants would come into operation thanks to the construction of the new pipelines.

The opinion "completely omits any discussion of the role Florida’s state agencies play in the construction and expansion of power plants within the state," Brown said.

In July, the D.C. Circuit found that the Trump EPA had no authority under the Clean Air Act to stay Obama-era standards limiting methane emissions from oil and gas operations. The decision was a big win for greens, who argued that the standards would both protect public health and help stem a potent greenhouse gas.

Brown, though, wrote that she would have dismissed the lawsuits. According to Brown, the administration’s stay was not a final agency action subject to court review.

"Hitting the pause button is the antithesis of ending the matter," she wrote in an eight-page dissent. "The Court presumes a certain outcome from EPA’s reconsideration, one that a stay alone gives us no basis to presume."

She wrote that the Trump administration properly limited the stay to portions of the Obama rule that it was planning to reconsider, including the requirements for fugitive emissions. If environmentalists want to challenge the reconsideration, they’ll have ample time later in the process, she said.

"The agency is merely announcing that it has decided to allocate its resources towards reconsideration rather than enforcing the rule," Brown wrote.

"That petitioners are anxious to see their victory implemented and impatient with delay does not make EPA’s action final," she added. "It may be annoying, disappointing, ill-advised, even unlawful, but that does not transform a stay to facilitate reconsideration into ‘final agency action.’"

In 2011, the D.C. Circuit upheld EPA’s delayed rules setting biofuel targets that refiners must meet under the renewable fuel standard. EPA missed an initial deadline by more than a year, then rolled its 2009 standards into its 2010 rule.

The court ruled that Congress had implicitly given EPA the authority to issue retroactive standards.

But in a nine-page dissent joined by Senior Judge David Sentelle, a Reagan appointee, Brown lambasted the court for upholding a retroactive rulemaking absent clear authority from Congress.

She faulted the court for relying on a single paragraph written by the late Justice Antonin Scalia in a concurring opinion stating that statutes "may be interpreted" to authorize retroactive rulemaking. The justice was merely devising a hypothetical situation, she said.

"The missed-deadline exception creates perverse incentives, rewarding dilatoriness and making regulatory burdens even less predictable," she wrote. "If an agency can accomplish tomorrow what the statute says to do today, Congress will lose a common and effective means of directing agency priorities."

In 2008, the D.C. Circuit threw out EPA rules regulating mercury emissions from power plants, finding that they violated the Clean Air Act. A group of Native American tribes and tribal organizations that had intervened in the case later sought to recover their fees.

The court granted the fee request in 2011, even though judges never considered the arguments the tribal groups raised in the case. To Brown, that was an "extraordinary step" and a "radical departure" from common practice.

"Since preserving the public fisc from unreasonable depredations also serves the public interest, I would not be so eager to find new ways to waste Other People’s Money," Brown wrote in an eight-page dissent.

The Clean Air Act allows judges to award attorneys’ fees where appropriate. According to Brown, that meant when an intervenor played a significant role in a case, not when it "merely caught ‘a train on its way out of the station.’"

She called other judges’ concern that denying attorneys’ fees to the tribal groups would discourage future intervenors from bringing suit "overblown." In fact, she wrote, the court’s decision would encourage parties to "hitch" their unrelated claims to challenges to regulations.

"If parties want to pile on just for the sake of piling on — to pursue some frolic of their own — why would it be inappropriate to require them to pay the costs of that indulgence?" she asked.