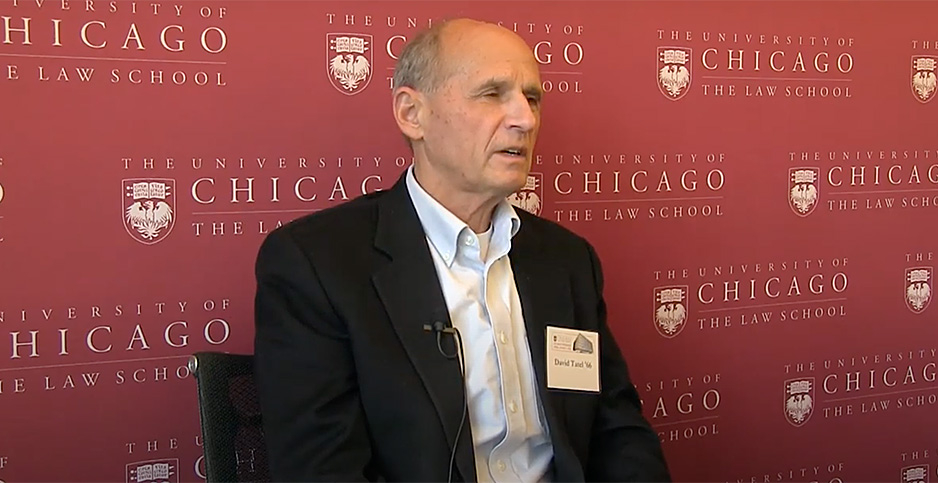 Judge David Tatel has taken on senior status at the U.S. Court of Appeals for the District of Columbia Circuit. University of Chicago Law School/YouTube

Judge David Tatel, who served on the nation’s most prominent appeals court for 27 years and had a hand in many major environmental cases, is stepping aside.

Tatel, 78, announced last night he would move to senior status on the U.S. Court of Appeals for the District of Columbia Circuit as soon as President Biden appoints his successor.

"[T]here is a time for everything, and for me, after 27 years, the time has come to move on and to make room for a new generation," Tatel wrote in a note to his clerks. "I feel good and strong, and I look forward to many years of service as a senior judge — and to more time with my wonderful family."

Among Tatel’s recent rulings are a decision to scrap a key easement for the Dakota Access pipeline, an opinion that struck down the Trump EPA’s policy of limiting advisory committee membership and a ruling that upheld an Obama-era marine monument.

In his December 2019 opinion that preserved the Northeast Canyons and Seamounts Marine National Monument, Tatel chastised commercial fishing groups for "grasping at straws" with their arguments that former President Obama exceeded his authority with the designation.

The fishing groups have asked the Supreme Court to review the D.C. Circuit ruling and are still waiting to hear whether the high court will take their case (Greenwire, Dec. 10, 2020).

Tatel’s move gives Biden a second shot at appointing a judge to the D.C. Circuit, which often has the last say on EPA rules and other major environmental issues.

The president has already tapped D.C. Circuit Judge Merrick Garland to serve as attorney general, which would open up a spot on the bench. The Senate Judiciary Committee has scheduled a two-day hearing for Garland on Feb. 22 and 23 (E&E Daily, Feb. 10).

One of Biden’s biggest challenges in reshaping the federal courts is the lack of opportunities to appoint new judges. When former President Trump took office, there were more than 100 vacancies, including one on the Supreme Court after Senate Republicans stonewalled confirmation hearings for Garland to fill the vacancy left by the late Justice Antonin Scalia.

Trump tapped Justice Neil Gorsuch to fill that seat and then had the opportunity to select two more Supreme Court justices — as well as more than 230 other judges throughout the federal court system (E&E Daily, Jan. 15).

But a number of federal judges have announced plans to retire or take senior status since Biden took office, and the president now has 61 federal court vacancies available to fill, according to data from the Administrative Office of the U.S. Courts.

Some liberal advocacy groups have called on Justice Stephen Breyer, the Supreme Court’s eldest member, to step down from the bench to ensure that a Democratic administration chooses his successor.

Judge Ketanji Brown Jackson of the U.S. District Court for the District of Columbia has been floated as one of Biden’s possible picks for the D.C. Circuit, which has a reputation for serving as a pipeline to the Supreme Court.

Biden has pledged to appoint a Black woman to the high court if a vacancy opens on the bench.

Lawyers who have argued cases before Tatel on behalf of both energy and environmental clients applauded the judge for his expertise on administrative law and his talent for juggling an enormous workload.

Senior judges maintain their salaries but provide their services on essentially a volunteer basis, participating in a smaller number of the court’s cases.

Sean Marotta, a partner at Hogan Lovells who has represented pipeline developers and refiners before the D.C. Circuit, called Tatel "a legend."

"Judge Tatel is one of the sharpest judges on the federal bench," Sam Sankar, Earthjustice’s senior vice president for programs, tweeted this morning. "And he will continue to be."

Tatel, who is legally blind, was appointed to the D.C. Circuit by former President Clinton to fill the seat vacated by Supreme Court Justice Ruth Bader Ginsburg.

Prior to joining the D.C. Circuit, Tatel worked at Hogan & Hartson, now Hogan Lovells, where he founded the firm’s education practice. In the 1970s, he directed the Office for Civil Rights at the then-Department of Health, Education and Welfare. Before that, he held leadership positions at the Lawyers’ Committee for Civil Rights Under Law, worked at the law firm Sidley Austin LLP and taught at the University of Michigan Law School.

Tatel said his shift to senior status will not occur until Biden has selected his replacement.

Over the next month, Tatel is scheduled to sit for remote oral arguments five times — more than any of his colleagues.