D.C. Circuit may be bulwark against enviro rule changes 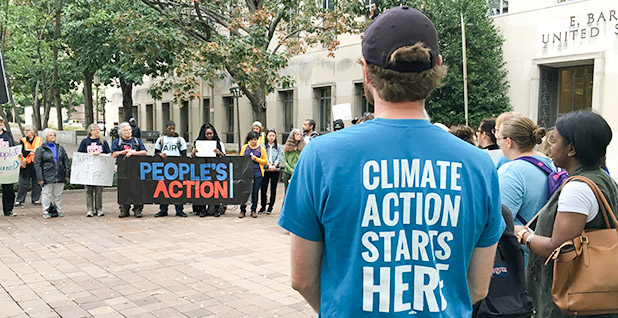 Protesters rallied outside the U.S. Court of Appeals for the District of Columbia Circuit during Clean Power Plan oral arguments in September. Environmental lawyers expect a busy few years of litigation under the Trump administration. Photo by Erika Bolstad.

A panel of judges in Washington, D.C., that leans liberal could give environmental advocates one bright spot in the next four years under a Trump administration that has pledged to undo a host of Obama administration regulations.

President Obama is leaving the U.S. Court of Appeals for the District of Columbia Circuit with a 7-4 liberal tilt among its roster of active judges. That figure includes Chief Judge Merrick Garland, who has recused himself from cases while his nomination to the Supreme Court is pending.

Even though all eyes have been on the vacancy in the Supreme Court, the high court justices typically choose to take up only a small percentage of cases. That makes the D.C. appellate court, which has exclusive jurisdiction over many environmental matters, especially important for the future of regulation no matter who fills the empty Supreme Court seat, legal experts said in the wake of the election.

"The courts are far better than they were a decade ago," said David Bookbinder, a consultant who formerly served as chief climate counsel for the Sierra Club. "This is actually going to be an easier situation."

Since then, Judges Douglas Ginsburg and David Sentelle, both appointees of President Reagan, have moved into senior status, hearing cases on a less frequent basis.

"One of President Obama’s legacies is that he left that court markedly different than the way he found it," said Brianne Gorod, chief counsel at the progressive Constitutional Accountability Center.

It’s widely recognized that the D.C. Circuit occupies a special place among federal appellate courts when it comes to administrative law.

"As a practical matter, the D.C. Circuit is something of a resident manager, and the Supreme Court an absentee landlord," the late Supreme Court Justice Antonin Scalia, who died in February, once said.

In general, the D.C. Circuit hears many environmental cases because they involve national rules in which the defendant is typically U.S. EPA or another federal agency.

"Under the Clean Air Act, most of the big national EPA rules get litigated there. They have to be litigated in the D.C. Circuit," said David Baron, managing attorney at Earthjustice. "And since the Supreme Court takes only a tiny number of cases every year, the D.C. Circuit is usually the court of last resort on matters under the Clean Air Act, and some other environmental statutes, too."

Along with Clean Air Act rules, the D.C. Circuit exclusively reviews some federal actions brought under other environmental statutes, including the nation’s hazardous waste law, the Endangered Species Act, the Oil Pollution Act, the Safe Drinking Water Act and the Toxic Substances Control Act. In other instances, petitioners can choose to file challenges in the D.C. Circuit.

"It’s almost as though Congress long ago said, ‘You be the expert court that deals with these issues because they’re so complicated legally,’" said Robert Percival, director of the University of Maryland’s Environmental Law Program.

The highest-profile environmental case that is currently pending at the D.C. Circuit is a challenge to the Obama administration’s Clean Power Plan, which aims to reduce carbon dioxide emissions from power plants. In a rare move, the court heard arguments in the case en banc, or in front of a panel of 10 judges. A decision is expected early next year.

To be sure, D.C. Circuit judges don’t always vote along party lines.

"The environmental statutes we litigate are generally pretty strong," Baron said. "Regardless of who the judges are, we very often have a solid basis going into the court to argue against weakening of protections and to argue for strong protections in many cases."

Numbers vary from year to year, but the Supreme Court typically grants around 70 cases a year, or about 1 percent of the petitions it receives for writ of certiorari.

Even with a conservative to replace the late Scalia on the court, justices will still be picky about the cases that they choose to hear, predicted Rena Steinzor, past president of the Center for Progressive Reform and a professor of law at the University of Maryland.

"They still look the cases over very carefully and only take ones where there’s a conflict of the circuits, or they’re concerned about the way the lower court ruled," said Steinzor, who has testified in Congress in support of regulations. "I think the D.C. Circuit will be even more important — but it’s already pretty important."

Among D.C. Circuit judges, Judge Brett Kavanaugh, an appointee of President George W. Bush, has a "pretty good track record" of writing dissents that signaled to Scalia that the high court should hear a case, Percival said.

But even with a "replacement Scalia," it’s unsafe to assume that the high court would merely rule 5-4 against all environmental regulations for which it agrees to hear challenges.

Percival pointed to the 6-2 decision in which the high court upheld EPA’s air pollution transport rule — which in turn overruled a D.C. Circuit decision issued before President Obama appointed his judges to the court.

"You still have the possibility of Justice [Anthony] Kennedy or Chief Justice [John] Roberts joining the justices that are more favorably inclined to environmental regulation," Percival said.