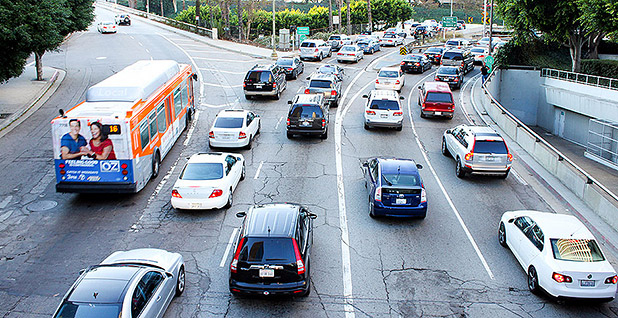 The U.S. Court of Appeals for the District of Columbia Circuit today rejected a challenge by states and environmental groups to the Trump administration's decision to revise Obama-era clean car standards. Prayitno/Wikimedia Commons

A federal appeals court today handed a defeat to states and environmentalists pushing back on EPA’s rollback of Obama-era clean car rules.

States and groups sued in May of last year, arguing the administration had sidestepped procedure and substantive review in announcing its reconsideration of an Obama-era midterm evaluation of greenhouse gas emissions standards for cars manufactured between 2022 and 2025.

They alleged EPA’s actions — spearheaded by former Administrator Scott Pruitt — did constitute a final rule that was in violation of the Administrative Procedure Act and the Clean Air Act.

EPA justified its revised determination, insisting the standards could be "too stringent" and needed to be reevaluated for appropriateness.

In a unanimous opinion, written by Judge Judith Rogers, the panel said EPA’s midterm evaluation final determination wasn’t set in stone and therefore could not be litigated.

The opinion noted that the agency’s determination "did not itself effect any change in the emissions standards."

"The Revised Determination is akin to an agency’s grant of a petition for reconsideration of a rule. When an agency grants reconsideration, it creates the possibility (but not the certainty) of an adjustment in the underlying rule, depending on the result of the ensuing proceedings," she wrote.

The ruling comes ahead of the administration’s hotly anticipated rollback of greenhouse gas and fuel economy standards for light-duty vehicles.

Avi Zevin, a senior attorney at New York University School of Law’s Institute for Policy Integrity, said the "substantive arguments" of the case will likely make their way to court again when the actual rollback is finalized.

"The D.C. Circuit’s decision was not a decision on the merits of the substantive claims that NGOs and states were raising," Zevin said. "The court wanted to wait until the agency had sort of acted in a final way before evaluating those claims."

He said the court’s opinion did make it clear that EPA would eventually need to answer for any insufficient evaluations.

EPA did not respond to a request for comment in time for publication. The Auto Alliance, which intervened in the case, welcomed the ruling.

"The Mid Term Evaluation was politicized by the previous administration and concluded early and abruptly and neglected to gather up-to-date information or input from DOT," the group said in a statement.

"The Auto Alliance membership believes future standards should increase year over year, include flexibilities and provide a compliance pathway for manufacturers to invest in products that consumers want to buy," the group said.