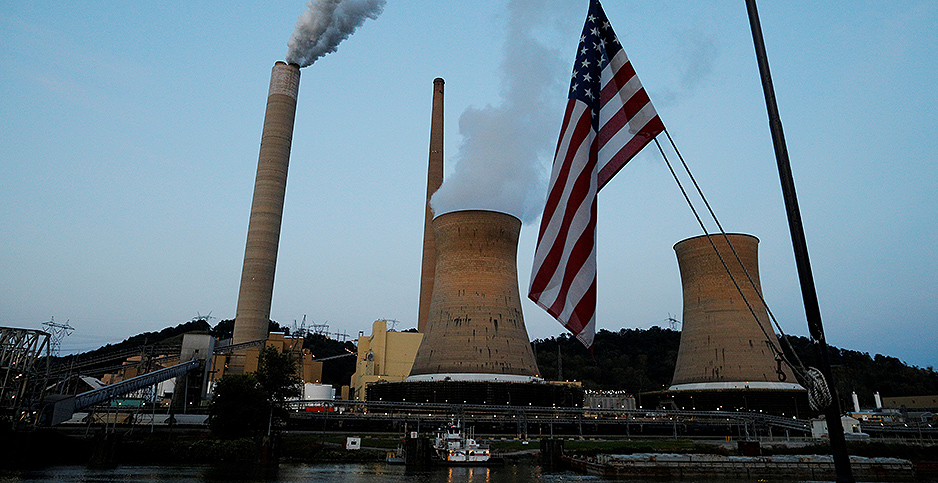 EPA heads to court today to defend its approach to regulating carbon emissions from coal-fired power plants in its 2019 Affordable Clean Energy rule. The coal-fueled Mitchell Power Plant is pictured along the Ohio River in Moundsville, W.Va., in this 2017 file photo. Brian Snyder/Reuters/Newscom

EPA will make a high-stakes courtroom argument today in favor of a more restrictive view of the federal government’s authority to control greenhouse gas emissions from power plants.

The agency is coming before the U.S. Court of Appeals for the District of Columbia Circuit this morning in a long-anticipated hearing to defend the Trump administration’s move last year to undo President Obama’s landmark 2015 Clean Power Plan (CPP) and replace it with the Affordable Clean Energy (ACE) rule.

EPA claims it can only take regulatory action that can be applied directly to coal-fired power plants, rather than take a systemwide approach championed by the agency under Obama.

In defending its position, the agency opted against arguing that it had exercised its discretion to interpret its authority differently from its predecessor. Instead, EPA contends that the Clean Air Act is clear on how to define the "best system of emissions reduction" for slashing greenhouse gases.

That argument seems designed to test the limits of the Clean Air Act’s role in regulating carbon dioxide emissions, said Jeff Holmstead, a partner at the law firm Bracewell LLP.

A slew of lawyers will appear before the U.S. Court of Appeals for the District of Columbia Circuit today to hash it out over EPA’s Affordable Clean Energy rule. Here’s a look at who will argue when:

"The only way they can do that is by adopting the position that they have, which is Section 111 has been interpreted in this way for almost 50 years now, and that’s what Congress intended, and that’s the only way that it can be used," Holmstead said, referring to a section of the landmark 1963 law.

EPA’s approach also narrows the question under the court’s consideration and does not provide the agency with a fallback argument if that position fails to convince the panel.

"I think they are going for broke here," said David Hayes, executive director of the State Energy & Environmental Impact Center at the New York University School of Law.

"They want to preclude a subsequent administration from reupping the Obama interpretation of the [Clean Air] Act," he said.

The strategy could run into problems because two of the three jurists on the panel, Judges Patricia Millett and Cornelia Pillard, had already heard many of the issues in this case during a marathon oral argument four years ago over the CPP. The third panel member is Judge Justin Walker, who was appointed to the court by President Trump this year.

The court never issued a ruling in the CPP case, but Millett and Pillard, who are both Obama appointees, had appeared inclined to uphold the climate rule based on their questioning at the time, said Holmstead.

"What really heightens the risk for the government is that you have two judges on the panel that heard not just the agency making a different argument, but — even if in the end they didn’t agree with the 2016 version of the agency’s argument — they certainly spent a lot of time themselves examining the play in the joints [of the statute]," said Joe Goffman, executive director of the Environmental & Energy Law Program at Harvard University Law School and a key architect of the CPP.

"That 4-year-old experience, I would argue, conditioned any judges who participated in that oral argument to see the language in dispute now as being more flexible than the EPA is now insisting that it is," he added.

This morning’s arguments will be divided into four sections, with the bulk of the time to be spent on addressing the decision to repeal the CPP and usher in EPA’s replacement rule.

Court watchers cautioned that the judges could allow attorneys in the 9:30 a.m. hearing to run well over the allotted 2 ½ hours of speaking time, but the arguments are not expected to run nearly as long as the hearing on the CPP, which stretched to about seven hours.

The start of today’s hearing will be devoted to arguments over whether EPA acted appropriately in repealing the CPP and limiting the agency’s authority to regulate carbon emissions.

Challengers of the repeal will push back on EPA’s interpretation of Clean Air Act Section 111, which defines what qualifies as the best system of emissions reduction, or BSER.

While the Obama administration had interpreted BSER broadly to allow for a systemic approach to reducing greenhouse gas releases through strategies like emissions trading and shifts to cleaner energy sources, EPA under Trump took a narrower view.

The administration interpreted BSER as only allowing the agency to put forward regulations that can be applied to a specific source — in this case retrofits that improve the heat rate of a power plant.

Challengers of the CPP repeal argue that EPA failed to consider Congress’ direction to consider the quantity of emissions reduction that could occur, or the severity of the pollution problem the agency was seeking to address.

They also warn that the agency didn’t account for detailed findings from the Obama administration about the cost-effectiveness of regulating the power sector as an interconnected system, rather than focusing on facility-level or "inside the fence line" fixes.

But EPA isn’t obligated under administrative law to provide detailed policy arguments about the severity of climate change because its argument is focused on how the language in the Clean Air Act about BSER is unambiguous, said Holmstead.

The agency had fulfilled its obligations by providing a draft proposal and giving public notice and comment on the rule change.

"As long as they’ve explained that, that’s all that’s required," he said.

While environmental groups will face off against EPA throughout much of today’s hearing, in the second part of the argument, the Clean Air Task Force will defend the agency’s authority to regulate greenhouse gases.

A small contingent of industry and conservative groups took issue with EPA taking any action to regulate carbon dioxide from the power sector, which they argued had not been shown to be a significant contributor to emissions.

The challengers also said EPA should not have been able to draft either the CPP or the ACE rule under Section 111 because power plants are already regulated for air toxics emissions under a different section of the Clean Air Act.

Clean Air Task Force legal director Ann Weeks compared that argument to saying drivers are doubly regulated because they are required to follow speed limits and stop at stop signs.

"Is that double regulation?" she asked during a press call this week. "I think we would all agree that it’s not. It’s two different things. And that’s the same thing that’s the case under the Clean Air Act."

Even if the Trump administration acted within the law when it decided to repeal the CPP, challengers will warn that EPA failed to comply with the law by finalizing a regulation that did not set any emissions targets for coal-fired power plants and deregulated natural gas facilities.

The ACE rule offers a list of "candidate technologies" that power plants could use to reduce emissions, but it rejects strategies like the use of carbon capture and storage, natural gas co-firing and conversion, and reducing use of older and less efficient power plants.

Challengers say EPA did not meet its requirements under the Clean Air Act to substantively account for emissions from the sector and the severity of climate change.

In addition to failing to set an overall cap on emissions, the ACE rule also allows older and less efficient power plants to remain in operation longer, which increases emissions. As natural gas power plants become more common, the absence of any regulation of existing sources is also concerning for the rule’s opponents.

The ACE rule’s approach is actually inconsistent with providing flexibility to states to determine the best way to address existing sources under a federalist approach to regulation, said Hayes.

"They’re pushing a federal cram-down solution that gives the states no discretion at all here," he said.

"They are putting a lot of pressure on the view that the statute is unambiguous because if there is any room for an alternative reading of it, they are going to lose, both because the emissions reductions aren’t being produced, and it doesn’t fit with the federalism system," Hayes said.

In its brief to the court, DOJ attorneys called EPA a "statutory servant" of the Clean Air Act.

"It wields no more authority than Congress granted there," the attorneys wrote. "EPA’s defined span of authority does not vary with the gravity of the environmental problem EPA is confronting, Petitioners’ preferred policy approach, or a perceived failure by Congress to act."

Trump’s replacement rule, unlike its predecessor, they said, was consistent with the statute and authority granted by Congress.

"The ACE Rule should be upheld," they wrote.

The final portion of today’s oral argument will address objections from the biomass industry over EPA’s decision to not allow burning biomass as a compliance method under the ACE rule.

The Biogenic CO2 Coalition charged that the agency’s decision to exclude crop-based biomass was "arbitrary and capricious."

EPA argued that biomass couldn’t be included because any emissions reductions from choosing the alternative source would not occur as the fuel was being burned at the power plant.

The Clean Air Task Force will again join EPA in support of the agency’s position, noting that while some of the environmental groups it partnered with in the lawsuit support the use of certain types of biomass, the task force is opposing biomass use in this case.

"The request that’s in front of the court from the biomass industry here is a blanket exemption for all burning of biomass-related fuels, which can be anything from crop residues to whole trees," said Weeks, who added that the approach "is simply not carbon neutral."