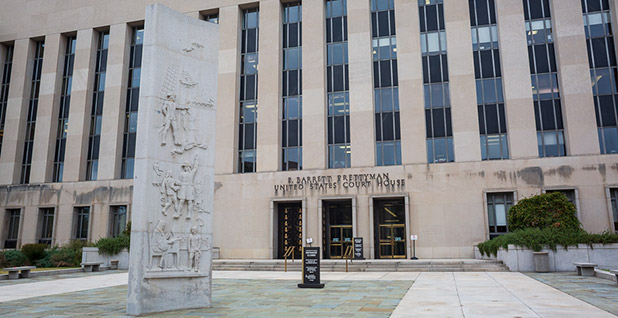 A federal appellate court is planning to reevaluate the legality of a Federal Energy Regulatory Commission review process that has angered pipeline opponents and was called a "Kafkaesque" regime by a judge.

The U.S. Court of Appeals for the District of Columbia Circuit agreed yesterday to rehear a case early next year on the expansion of the Atlantic Sunrise pipeline before the entire panel of judges. That will allow the court to examine FERC’s use of "tolling orders" in the advancement of approved pipeline projects.

Environmentalists and landowners opposing the pipeline had challenged tolling orders, which allow FERC to effectively delay consideration of opposition to a project while simultaneously allowing a company to begin to seize land and start construction of the pipeline.

Critics of the practice, which they say has become nearly ubiquitous in FERC’s pipeline approvals, call it a clear violation of landowners’ rights to due process.

FERC did not respond to a request for comment.

The court’s decision to rehear the case strongly suggests it is considering striking down FERC’s use of tolling orders, legal analysts said.

"This is a huge deal," said Robert McNamara, senior attorney at the Institute for Justice, who is not involved with the case.

"The grant of rehearing is not only a signal of what the court thinks of the merits, but also the importance of the case," he said.

Siobhan Cole, an attorney representing landowners opposing the Atlantic Sunrise pipeline, said her clients were excited by the court’s decision.

"Very few cases are granted rehearing en banc, my clients are really happy that they are being heard and they have a chance to change the process for the people who came after them," Cole said.

Yet Laura Creekmur, spokeswoman for Transcontinental Gas Pipeline Co. LLC, which operates the Atlantic Sunrise pipeline, said yesterday’s order would do nothing to impact the company’s ability to "provide natural gas transportation service through the Atlantic Sunrise Project facilities."

Creekmur noted that the D.C. Circuit had previously upheld FERC’s authority to use tolling orders.

The case originally was decided last August by a three-judge panel (Greenwire, Aug. 2). The judges upheld FERC’s approval of the project and rejected arguments from opponents of the pipeline that FERC violated the Natural Gas Act and constitutional protections for due process through its use of tolling orders.

But Judge Patricia Millett, in a concurring opinion at the time, issued a stinging rebuke of the way FERC had used tolling orders. She noted that D.C. Circuit precedent prevented her from ruling against the federal agency.

"[T]he Commission has twisted our precedent into a Kafkaesque regime. Under it, the Commission can keep homeowners in seemingly endless administrative limbo while energy companies plow ahead seizing land and constructing the very pipeline that the procedurally handcuffed homeowners seek to stop," she wrote in the concurring opinion.

Millett, an Obama appointee, called for the court to take a second look at the issue. By agreeing to hear the case with all the court’s judges, the court would be able to overturn the prior precedent, legal experts said.

They described tolling orders as a system developed by FERC to extend its consideration of projects without stopping their progress.

Under the Natural Gas Act, private companies with a certificate order from FERC can use eminent domain to seize land to build a pipeline. Landowners can then petition FERC for a rehearing, which the commission is supposed to respond to within 30 days.

If FERC denies a petition or fails to respond in time, landowners can bring the commission to court.

But by issuing tolling orders, FERC is able to get around that 30-day deadline by granting a rehearing "for the limited purposes of reconsideration," Cole said.

This prevents the case from being denied and has allowed FERC to delay action on addressing petitions. At the same time, the tolling order doesn’t delay a pipeline company’s approval for the project.

She added that by the time landowners are able to actually bring their concerns before FERC, their land has already been taken or, in the case of the landowners in the Atlantic Sunrise pipeline case now slated for rehearing, the pipeline is already in the ground.

She said because FERC knows it gets "a second bite at the apple" to consider complaints, FERC ignored issues in the certificate order initially. Preventing FERC from taking this approach could significantly affect the way the commission considers projects.

"If FERC knows it only has 30 days to make a decision on rehearing, it’s going to be much more cautious when it issues certificate orders. It will take longer to issue a certificate order, and it will take longer for a project to go forward," she said. "It’s forcing FERC to do what it should be doing in the beginning, to address issues in a meaningful way before commencing a project."

Elefant said the judges may be leaning toward overturning prior precedent, adding, "Otherwise it would have no reason to have this en banc ruling unless they were thinking seriously about doing something."

She cautioned that even if FERC eliminated the use of tolling orders, landowners could still end up in lengthy conflicts over a pipeline, given the often slow pace of litigation.

The D.C. Circuit has scheduled oral arguments in the case for March 31, 2020.