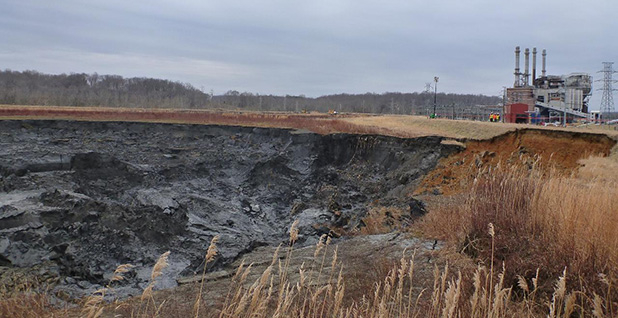 For the past year, the Trump administration has been striving to ease what it belittles as "one-size-fits-all" regulations for coal ash disposal.

Only last month, EPA published a first round of amendments to those 2015 rules, pushing back one compliance deadline under some circumstances and relaxing other requirements in the name of added flexibility for state and federal regulators (Greenwire, July 18). A second round is due by next year.

But with potentially high stakes for power producers, that rollback regimen has collided head-on with an appellate court decision on competing legal challenges brought by utilities and environmental groups.

Far from being too rigid, key elements of the 2015 Obama-era regulations are not tough enough to adequately protect public health from the threat of water contamination, a three-judge panel on the U.S. Court of Appeals for the District of Columbia Circuit wrote in a unanimous opinion last week.

The panel threw out provisions that generally allow utilities to keep using unlined and clay-lined coal ash storage ponds as long as no leaks have been detected. They also voided an exemption for inactive "legacy" ponds at coal-fired plants no longer producing electricity (Greenwire, Aug. 21).

Assuming that the ruling stands, EPA could have to completely rework those provisions to overcome the judges’ objections.

"You really have a clash of directions on where the court says EPA must go and on where the Trump EPA is heading," said Lisa Evans, an Earthjustice attorney involved in coal ash issues for almost 20 years, who told the Obama team its rule should have been stronger.

The ruling also raises questions, Evans said, about the legality of EPA’s recent go-ahead for Oklahoma to create its coal ash permitting program based on regulations that have now been sent back to the agency (Greenwire, June 19).

Still to be seen is whether EPA or industry plaintiffs ask the court to revisit its decision. In response to emailed questions from E&E News, an EPA spokesman would say only that the agency is reviewing the ruling.

Jim Roewer, the executive director of the Utility Solid Waste Activities Group, the lead industry player on coal ash regulations, who has long argued the Obama administration overreached, did not respond to an interview request placed through a spokesman.

But the decision "is most likely very frustrating to both the industry and to the agency," said Kenneth von Schaumburg, who served as an EPA deputy general counsel during the George W. Bush administration and now heads the environment, energy and natural resources practice at the law firm Clark Hill PLC.

While EPA had sought to build a "fair" playing field, von Schaumburg said in an interview, "they’re going to have to take a look at some of the decisions that were made."

That process could pose yet another test for Andrew Wheeler, EPA’s recently installed acting chief, who previously lobbied for Murray Energy Corp., the Ohio-based coal giant.

Last year, Bob Murray, the company’s CEO, unsuccessfully pressed the Trump administration to halt implementation of the 2015 coal ash regulations and then either repeal or revise them (Greenwire, June 6).

Environmental groups are wary of Wheeler’s intentions on a variety of fronts. Von Schaumburg, who crossed paths with Wheeler when the latter was a staffer on the Senate Environment and Public Works Committee, predicted that he will be "very thoughtful and reasoned" to ensure that the resulting rules "stand up in court and withstand the test of time."

Coal ash, produced in enormous quantities by coal-fired power plants, amounts to one of the nation’s largest industrial waste streams. It is typically stored in ponds — also known as surface impoundments — or landfills.

The 2015 regulations, which were more than four years in the making, set first-ever federal standards for liners, structural integrity and groundwater monitoring at hundreds of disposal sites around the country.

Although EPA classifies coal ash as nonhazardous, the court’s decision noted that it can contain arsenic, mercury and other toxins that may heighten the risk of developing some forms of cancer.

After decades of delay, the agency was goaded into action after a 2008 dike failure at an unlined Tennessee Valley Authority impoundment slathered a Tennessee river and 300 acres of land with coal ash slurry. Six years later, as EPA was wrapping up work on its regulations, a spill at an inactive Duke Energy Corp. pond dumped 39,000 tons of coal ash into North Carolina’s Dan River.

The magnitude of the risk posed by coal ash appeared to weigh heavily on the D.C. Circuit panel. The vast majority of impoundments are unlined, its ruling said, with a 36 percent to 57 percent chance of leaking "at a harmfully contaminating level during their foreseeable use."

Even though EPA and industry challengers argued that most unlined impoundments don’t leak and therefore don’t need sturdy composite liners, the court disagreed.

Out of 157 sites where EPA confirmed that coal ash leakage has harmed human health and the environment, most involved "unlined units," the court found. As for clay-lined impoundments, they’re "dangerous," the decision said.

Under the 2015 regulations, EPA already requires new impoundments and landfills to have composite liners. Both von Schaumburg and Evans agreed that one option for addressing the court’s decision would be to require utilities to retrofit existing impoundments with liners or else shut them down.

For utilities, which in some cases are already predicting hefty expenses for complying with the 2015 regulations, it’s not clear how much more such a requirement would add to that bill.

Both Duke and TVA, for example, are already moving to close their existing impoundments, often by drying them out and then capping them. After committing to that step in 2009, TVA now expects the task to be completed "some time in the next five years," spokesman Scott Brooks said in an email yesterday.

In a separate message, Duke spokeswoman Shannon Brushe stopped short of saying when the Charlotte, N.C.-based company expects to close all of its 60 impoundments.

"The sites are all on different timetables depending on federal and state requirements, and any changes to those requirements," Brushe said in an email.

"It is … awfully early," said Mark Maassel, president of the Indiana Energy Association, when asked in an interview to gauge the ruling’s possible impact on power producers in the state. While his members are still evaluating the decision, Maassel said, "this will obviously create a certain level of uncertainty."