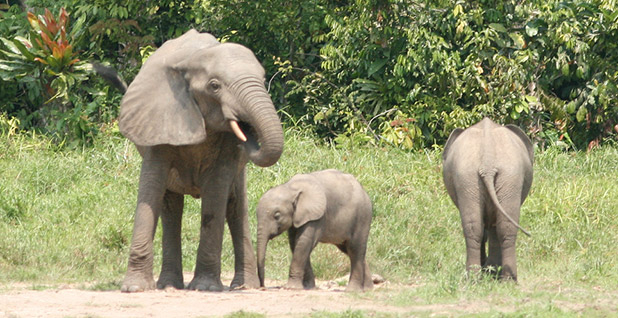 An African elephant family in a rainforest clearing. Richard Ruggiero/USFWS

The Trump administration acted within its authority when it decided imports of elephants and other animals hunted in Africa enhance the survival of those species, a federal appeals court found today.

Judges for the U.S. Court of Appeals for the District of Columbia Circuit said they could not review a March 2018 Fish and Wildlife Service memo that withdrew Obama-era findings that found an absence of data to support a determination that hunting and trophy imports would help the animals’ survival.

The D.C. Circuit determined in a separate 2017 case that FWS’s earlier findings should have gone through notice and comment.

"Since we can do nothing to affect appellants’ rights relative to those now-withdrawn findings, appellants’ challenges to them are ‘classically moot,’" Senior Judge Laurence Silberman wrote in today’s opinion.

During oral arguments in the case, Center for Biological Diversity senior attorney Tanya Sanerib noted the D.C. Circuit’s 2017 opinion directed FWS to start writing a rule on the enhancement findings.

"The Center contends that the move to making findings on a case-by-case basis injures its members’ concrete interests because doing so removes the possibility of flat bans on trophy import permits, thus increasing the likelihood that African wildlife will be hunted," Silberman wrote today.

"The trouble with this theory is that it assumes the Service will make substantively different decisions depending on which procedure is used."

He concluded there is "no reason to expect" that the change in FWS’s procedures would result in more animal deaths.

"This marks a sad day for elephants and lions," Sanerib said of today’s decision. "While the decision doesn’t address the validity of authorizing imports of threatened animals killed for sport, it does leave the Trump administration to make these crucial decisions behind closed doors and without public involvement.

"We’ll keep up the fight to protect imperiled animals from being shot by trophy hunters."

Another lawyer representing challengers in the case said the ruling came as a blow.

"The ruling allows FWS to avoid accountability and issue permits to import threatened species without involving or notifying the public," said Stephen Hernick, senior attorney with Friends of Animals’ Wildlife Law Program. "This is particularly inappropriate because scientists believe that these species will not even survive in the wild fifty years from now.

"We can only hope that a new administration reverses this ill-conceived policy."

Groups that argued on the government’s behalf in the case applauded the decision.

"The law was clearly against the plaintiffs," said Jeremy Clare, litigation counsel for Safari Club International. "We hope the Service can now proceed with making science-based determinations for import permits, uninterrupted by unreasonable and unsubstantiated legal challenges."

The Interior Department, which houses FWS, could not be immediately reached for comment.