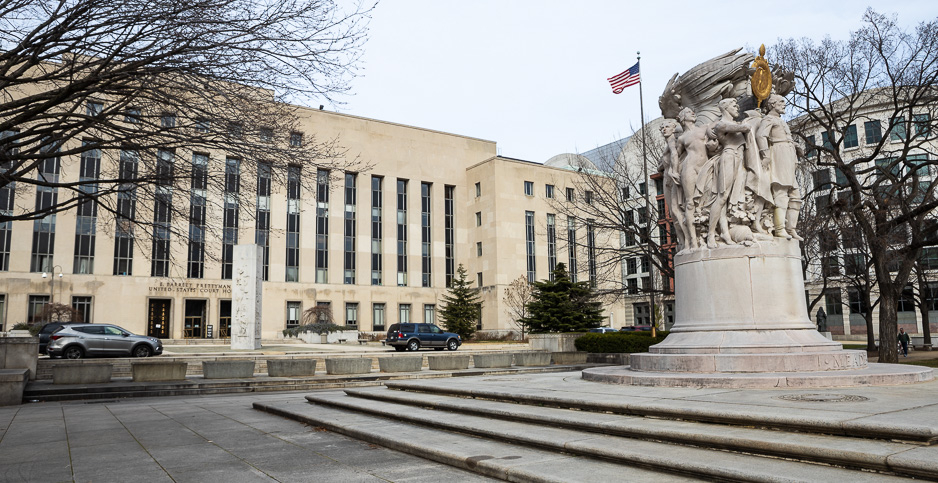 The E. Barrett Prettyman U.S. Courthouse in Washington is home to the U.S. Court of Appeals for the District of Columbia Circuit. Francis Chung/E&E News

The nation’s most prominent court of appeals is facing a jam-packed environmental docket this fall.

The U.S. Court of Appeals for the District of Columbia Circuit has blocked off an entire morning in October to hear arguments in a blockbuster challenge to the Trump administration’s rescission of Obama-era rules for carbon dioxide emissions from power plants.

But before that, the court will spend September hashing out disputes over truck trailer emissions standards, environmental cleanups, ozone rules and biofuels.

The D.C. Circuit will hear each case remotely, as the courthouse remains closed due to the ongoing coronavirus pandemic.

Here’s a look at five environmental cases on the D.C. Circuit’s fall calendar:

A New Jersey-based pesticide manufacturer will appear virtually before the D.C. Circuit tomorrow to argue that EPA got it wrong when it targeted a 1.5-mile stormwater conveyance as a high-priority site under the Comprehensive Environmental Response, Compensation and Liability Act.

Pierson’s Creek, which forms part of an industrial wastewater system for Newark, does not meet the criteria for designation on the National Priorities List, Troy Chemical Corp. will argue to the court. The firm’s primary manufacturing facility is located on the Superfund site, which is estimated to contain thousands of pounds of mercury after decades of pollution.

Troy Chemical v. EPA has been at the D.C. Circuit since 2014, the year the government designated the Pierson’s Creek site. The litigation had been on hold while Troy Chemical and EPA worked on the listing, but the court issued an order last year resuming proceedings in the case.

EPA will defend its scoring of the site’s threat to wetlands and food sources for people who fish in the contaminated area.

After a three-year freeze, legal wrangling over emissions standards for truck trailers is back on track in the D.C. Circuit.

During oral arguments in Truck Trailer Manufacturers Association Inc. v. EPA, a panel of judges will consider whether the Obama administration overstepped when it introduced fuel economy standards for heavy-duty trailers hauled by tractors and large trucks.

Under President Trump, EPA and the National Highway Traffic Safety Administration said they would reconsider the validity of the standards, which were part of a rule governing emissions from medium- and heavy-duty vehicles through 2027. The standards are set to take effect early next year, and the agencies have yet to reach a determination.

The Truck Trailer Manufacturers Association, which will argue that trailers are not vehicles with fuel economy to regulate, told the D.C. Circuit it could "no longer afford to wait" for the court to weigh in.

EPA’s action on ozone, the key ingredient in smog, is once again in the spotlight at the D.C. Circuit this year.

In Sierra Club v. EPA, the court will scrutinize environmentalists’ argument that the Obama EPA broke the law in 2015 when it created a loophole in its ozone standards to allow large industrial facilities to choose their own starting point for emissions reductions and to rely on previously implemented controls to demonstrate compliance.

EPA will defend its implementation of the Clean Air Act’s National Ambient Air Quality Standards for ozone as a proper exercise of the agency’s statutory authority.

Small biofuel retailers this fall will take aim at what they argue is EPA’s failure to set proper volume requirements for the percentage of transportation fuel that must contain renewable fuel.

By setting the 2019 volume limits too low, challengers in Growth Energy v. EPA contend, the federal government has suppressed demand for their industry’s product and jeopardized their investments and operations.

Environmental petitioners in the case will also raise claims that the federal government ignored the impact that renewable fuel production has on vulnerable plants and animals.

EPA has argued that the D.C. Circuit should scrap the trade groups’ challenges as meritless and contends that the environmental groups lack standing to bring their claims before the court.

American Lung Association v. EPA will be one of the most closely watched D.C. Circuit cases this year.

Environmental groups, blue states and health advocates will argue that the Trump administration flouted the law when it rolled back the Obama-era Clean Power Plan, which aimed to reduce carbon dioxide emissions from power plants.

Conservative groups have also joined the fray to argue that Trump’s EPA did not go far enough with its rollback.

Lawyers for the Trump administration are expected to defend its Affordable Clean Energy rule as a proper application of EPA’s Clean Air Act authority.

The D.C. Circuit heard seven hours of oral argument on the Clean Power Plan in September 2016 before the Trump administration stepped in and upended the regulation.

If Democratic nominee Joe Biden wins the White House this fall, his administration could choose to walk back the Trump rule, prompting a fresh round of legal wrangling.