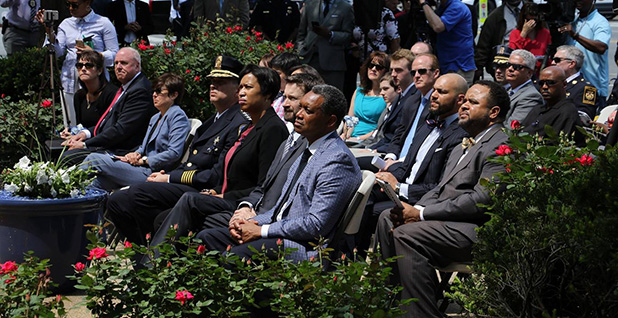 The District of Columbia’s top lawyer is preparing for a potential courtroom fight against one of the biggest oil companies in the world.

Racine tweeted about the climate team Friday, linking to a D.C. government website with a document that for the first time confirms his office’s plans to launch a formal inquiry into Exxon’s business practices.

The Democrat has been eyeing Exxon at least since 2016 when he joined a coalition of state attorneys general vowing to investigate fossil fuel companies for allegedly misleading the public and investors on climate impacts.

New York, Massachusetts and the Virgin Islands have launched high-profile public investigations of the oil giant in recent years, but other jurisdictions tend to keep such proceedings under wraps.

The document Racine shared Friday requests proposals for "outside legal counsel for climate change litigation," specifying that the lawyers will focus on Exxon’s "potential violations of the Consumer Protection Procedures Act (CPPA) or other District laws in connection with Exxon’s statements or omissions about the effects of its fossil fuel products on climate change."

Racine’s efforts are the latest in a high-stakes climate fight already playing out in courts, Capitol Hill and the media. Exxon is accused of misleading the public about climate change by concealing in-house research on the impacts of burning fossil fuels.

The company denies the allegations, touting its own efforts to slow warming. It didn’t respond to a request for comment on the D.C. investigation.

Racine’s new climate counsel job posting outlines his office’s appraisal of Exxon’s behavior: "Since at least the 1970s, Exxon has been aware that its fossil fuel products were significantly contributing to climate change, and that climate change would accelerate and lead to significant harms to the environment in the twenty-first century."

But, it says, the company failed to inform consumers, including D.C. drivers buying gasoline at Exxon stations in the city.

The office "has determined this conduct should the subject of an investigation or litigation against Exxon to secure injunctive relief stopping violations of the CPPA or other District law, as well as securing consumer restitution, penalties and the costs of any litigation," the document concludes.

The plan calls for a senior climate lawyer, a junior lawyer and a paralegal on a five-year contract with options to extend. They won’t get paid unless Exxon coughs up cash in a legal judgment, settlement or arbitration.

Racine’s office already has at least one dedicated environmental lawyer, a position funded by New York University’s State Energy & Environmental Impact Center. The climate counsel team will not be affiliated with that group.