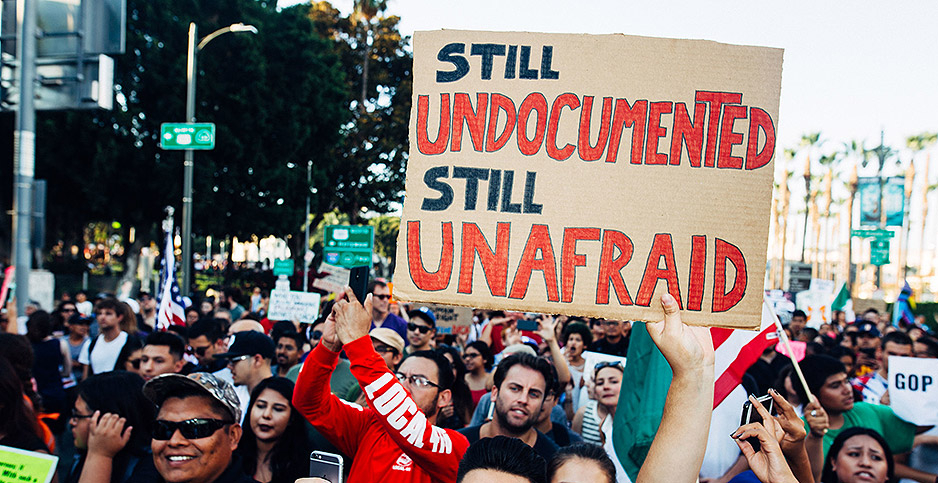 Protesters gathered in Los Angeles in 2017 after the Trump administration announced that it was rescinding the Obama-era Deferred Action for Childhood Arrivals policy. Molly Adams/Flickr

The Supreme Court’s decision today upholding deportation protections for people who came to the United States illegally as children also preserves the judiciary’s ability to consider rollbacks of environmental laws.

In a 5-4 opinion led by Chief Justice John Roberts, the court found that the Trump administration’s rescission of the Obama-era Deferred Action for Childhood Arrivals (DACA) program was both reviewable and "arbitrary and capricious" under the Administrative Procedure Act.

The court noted it did not decide whether DACA or the Department of Homeland Security’s removal of the program were sound policy choices. The justices examined only the Trump administration’s procedural approach for dismantling the safeguards.

"Here the agency failed to consider the conspicuous issues of whether to retain forbearance and what if anything to do about the hardship to DACA recipients," Roberts, a conservative, wrote in the majority opinion joined by the court’s four liberal justices.

"That dual failure raises doubts about whether the agency appreciated the scope of its discretion or exercised that discretion in a reasonable manner," he wrote.

In 2017, DHS issued a memo rescinding the 2012 DACA policy, a program that allowed recipients to apply for two years of protection from deportation, as well as various federal benefits. Nearly 700,000 people, sometimes known as "Dreamers," made use of the policy.

The move by DHS followed the agency’s decision to walk back an expansion upon the DACA program that removed the age cap for recipients and offered an extra year of forbearance. A federal court issued a freeze on the expansion, and DHS concluded that DACA itself was likely to meet a similar fate.

DACA recipients, states and other interests sued over the rollback, leading to a series of rulings in favor of the challengers. In response, DHS issued a second memo to explain its decision ending the DACA program, and the Supreme Court took up the case while appeals were pending in several circuit courts.

"Such Trump reversals have often provided little or no analysis of reliance interests flowing from the earlier action and skimpy analysis of effects of the new actions," he said. "Such flawed approaches are especially evident in climate deregulatory actions and the ‘waters of the United States’ rollback, but in many other actions as well."

This isn’t the first time Roberts has joined the Supreme Court’s liberal wing on a question of administrative law.

Last term, Roberts led a splintered opinion that said the Trump administration needed to adequately justify its decision adding a citizenship question to the 2020 census.

Justice Clarence Thomas wrote at the time that Roberts had "opened a Pandora’s box of pretext-based challenges" on the reasoning behind every future agency decision (Greenwire, June 27, 2019).

Thomas wrote today that the majority decision in the DACA case would have the effect of binding federal agencies to comply with unlawful policies ushered in by previous administrations. Justices Samuel Alito and Neil Gorsuch joined Thomas’ dissent.

"Instead of simply terminating the program because it did not go through the requisite process," he wrote, "the agency will be compelled to treat an invalid legislative rule as though it were legitimate."

Alito and Justice Brett Kavanaugh each wrote separate concurrences and dissents. Justice Sonia Sotomayor joined the majority opinion but wrote she would have left open the possibility of a challenge under the equal protection clause of the Constitution.

The high court’s instruction that agencies must justify their decisions is the law of the land no matter who is in the White House, Percival said.

"The Court is not saying that agencies may not change policies; rather it emphasized that they must do so in a manner that considers all relevant factors and that rests on a sound rationale articulated at the time the decision is made," he said.