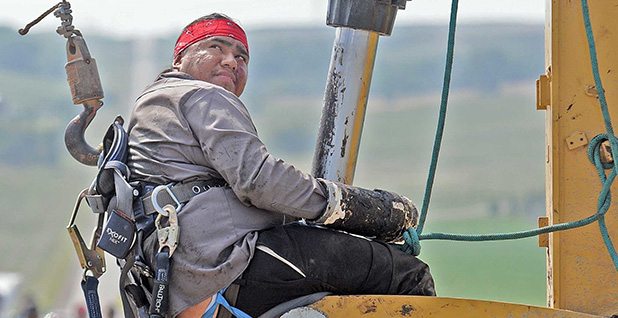 A person sits in protest at the site of construction of the Dakota Access pipeline in central North Dakota last week. Photo courtesy of AP Images.

The fever-pitched pipeline battle that has been dubbed "the next Keystone XL" is likely to hinge on technical permitting issues — not the grand gestures of civil disobedience that have fueled opposition so far.

While tribal members, environmental allies and celebrities rally against the Dakota Access pipeline near construction sites and outside courthouses, the meat of the dispute is in the trove of legal briefs, affidavits and court precedent that will help decide the $3.8 billion oil pipeline’s fate.

The Standing Rock Sioux Tribe sued the federal government in July for greenlighting the 1,168-mile project, which would stretch from North Dakota to Illinois. According to the tribe, whose land includes a swath of North and South Dakota along the Missouri River, the Army Corps of Engineers approved segments of the line without fully considering the impact on culturally significant sites (EnergyWire, July 29).

The case is in the hands of U.S. District Judge James Boasberg, who last month heard arguments for both sides on whether permits should be revoked and construction halted while the lawsuit moves forward.

That decision alone will have widespread implications: If the court grants a preliminary injunction, other projects across the country are expected to face similar pressure from opponents, and permitting may slow in response to increased scrutiny.

Once he issues an injunction decision, Boasberg will move on to even thornier issues — the complex legal arguments over Army Corps permitting.

The Sioux’s lawsuit is a broad challenge to the agency’s longtime permitting system for pipelines and other utility projects. The 15,000-member tribe, represented by the environmental firm Earthjustice, is pushing for reform.

The permitting system at issue is complicated.

Every five years, the Army Corps crafts general permits for a variety of activities under its jurisdiction, such as water crossings, dredging and filling. The process includes environmental review and public comment.

Pipelines that cross corps-regulated waters are subject to the utility general permit: Nationwide Permit 12, or NWP 12. A pipeline developer can gain approval for water crossings by meeting standard criteria and asking the agency to "verify" that it is covered under NWP 12.

For the Dakota Access pipeline, the agency approved more than 200 water crossings, reviewed an environmental assessment prepared by the developer and required additional archaeological monitoring around some sites. Project backer Energy Transfer Partners avoided many culturally significant sites when it planned the route and performed surveys to assess other potential areas of concern.

But the tribe says its concerns weren’t taken seriously along the way, and the final pipeline route includes ancestral lands the tribe has not yet studied to know whether they include artifacts, burial grounds or other special places.

On-site construction monitors are not enough, said Earthjustice attorney Jan Hasselman, who maintains that the tribe should have had more say in the route-planning process.

In its lawsuit, the tribe lays much of the blame on the Army Corps’ reliance on the NWP 12, arguing that the use of the general permit doesn’t leave room for in-depth environmental and cultural reviews during the pipeline planning process.

"In essence, in enacting [the permit], the Corps pre-authorized construction of DAPL [Dakota Access pipeline] in all but a handful places requiring federal authorization without any oversight from the Corps," the suit says. "In so doing, the Corps abdicated its statutory responsibility to ensure that such undertakings do not harm historically and culturally significant sites."

Federal agencies have weighed in, too. The Interior Department, U.S. EPA and the Advisory Council on Historic Preservation all submitted comments to the Army Corps, raising concerns about safety and environmental justice issues along the route.

The corps does not comment on pending litigation but made its frustration about the case known in legal filings last month, arguing that it followed a robust tribal consultation process and that the Sioux withdrew from a scheduled site visit with the corps and declined to participate in tribal surveys.

Part of the problem with the permitting system, environmentalists say, is that it allows the agency to consider the impacts of individual water crossings, deem them minor and use a general permit to effectively expedite approval for the whole project.

Critics of that approach say the corps should look at the broader impacts of the pipeline, which would be significant enough to trigger an individual permitting process — warranting public comment, tribal consultation and in-depth review under the National Environmental Policy Act and the National Historic Preservation Act.

"This is getting at basically a practice of the corps that allows major pipelines to escape any sort of review under the corps permitting process," said Jim Murphy, senior counsel at the National Wildlife Federation. "If the corps had done this under an individual permit, the corps would have a very clear obligation to do full consultation under the National Historic Preservation Act."

It’s not the first time environmentalists have challenged the use of general permits. The Sierra Club lodged a similar complaint against the southern portion of Keystone XL, known as the Gulf Coast Pipeline, in 2012.

In a lawsuit in the U.S. District Court for the Western District of Oklahoma, environmentalists challenged approvals of specific water crossings and, more broadly, the Army Corps’ use of a nationwide permit for the 485-mile project. They argued that the agency’s verifications of various water crossings should have triggered fresh NEPA review.

The district court ruled for the agency, endorsing the corps’ long-standing practice of focusing on discrete activities, like water crossings, when making permitting decisions, and relying on general permits that are subject to NEPA analysis when they are updated every five years. The 10th U.S. Circuit Court of Appeals upheld the decision.

"In issuing the verifications, the Corps simply confirmed that TransCanada’s activities would fall within the terms of Nationwide Permit 12," the 10th Circuit decision said. "There would have been little reason for the Corps to conduct a new NEPA analysis at that point."

Murphy says the district court in Washington, D.C., where the Sioux challenge is playing out, has the opportunity to give fresh consideration to the environmentalists’ position.

"I think the court got it wrong in that case," he said. "That argument is still a valid one."

But the issue came up again just last year at the U.S. Court of Appeals for the District of Columbia Circuit, where the Sioux case will land if appealed. In another Sierra Club challenge, the D.C. Circuit ruled that the Army Corps did not violate NEPA when it issued verifications piece by piece for the Flanagan South oil pipeline, running 593 miles from Illinois to Oklahoma.

In the near term, the tribe will likely have a tough time winning the construction freeze and permit revocation it’s seeking, said ClearView Energy Partners LLC analyst Christi Tezak.

"They really struggled to present that they’ve got a particularized risk of injury," she said. "They want to revoke permits that are four states away. That’s an impractical issue at least in terms of the preliminary injunction."

A more limited temporary injunction would be more likely, she said, noting that the judge may find it reasonable to freeze construction on a few areas that have not yet been excavated, including Lake Oahe, a half a mile upstream from the tribe’s reservation on the banks of the Missouri River.

Boasberg, the judge handling the case at the district court, is an Obama appointee who is generally considered evenhanded. The D.C. native has a relatively limited environmental record but has handed down recent decisions upholding a U.S. Forest Service exemption for a roadless area and striking down a National Marine Fisheries Service decision on catch limits.

Even if the tribe doesn’t succeed on the injunction or the broader merits of the case, Tezak says the legal effort will likely result in some changes when the nationwide permit is updated in 2017.

"It’s a very interesting case because at the end of the day, it’s going to matter more for the next NWP 12," she said, noting that environmentalists backing the lawsuit may be playing a long game.

And in the meantime, the campaign against the Dakota Access pipeline has raised the profile of oil pipeline permitting. Scores of environmental groups and tribes have come to support the Standing Rock Sioux, joining them in a massive demonstration in North Dakota, where thousands have set up camp to show their opposition.

Murphy says many people are noticing the contrast between the level of review for an international pipeline like Keystone XL and a domestic project.

"For pipelines like the Dakota Access that don’t cross international borders, there’s really not — other than the corps permitting process — there’s really not much else in terms of federal review," he said. "We have a situation where major domestic pipelines that put some of our most iconic habitat areas at risk are being allowed to be put in the ground with little more than checking a couple boxes on a piece of paper."

A decision on the injunction is expected by Friday.