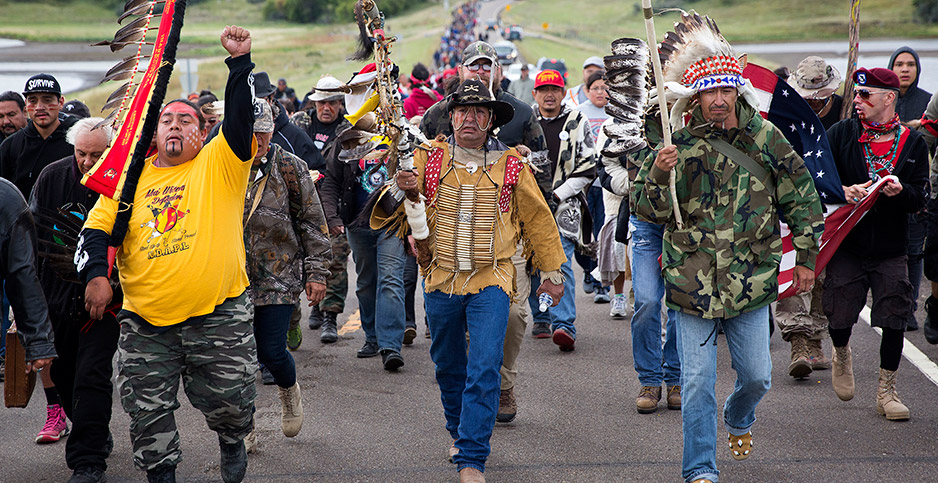 Protesters led a march to the Dakota Access oil pipeline route on Sept. 9, 2016, in Cannon Ball, N.D. Federal agencies and pipeline developers are under more pressure to take their time on environmental analysis after a recent court decision ordering the shutdown of the pipeline. Visual&Written/Newscom

This week’s court-ordered shutdown of the controversial Dakota Access pipeline serves as a stark warning to federal agencies and project developers to thoroughly investigate environmental risks of projects ahead of construction, legal experts say.

Judge James Boasberg for the U.S. District Court for the District of Columbia ruled Monday that the 1,172-mile crude oil pipeline had to be shut down and emptied of oil by Aug. 5.

At the heart of the decision was the Army Corps of Engineers’ failure to comply with requirements under the National Environmental Policy Act, prompting the judge to scrap the federal agency’s approval for the project as he called for further environmental analysis.

Boasberg emphasized the importance of complying with the statute.

"When it comes to NEPA, it is better to ask for permission than forgiveness: if you can build first and consider environmental consequences later, NEPA’s action-forcing purpose loses its bite," Boasberg, an Obama appointee, wrote in his opinion (Greenwire, July 6).

Until this week’s decision, environmental groups had only been able to stop new pipelines from moving forward, rather than undoing existing projects, said Joel Eisen, a professor at the University of Richmond School of Law.

"I think [project developers] will be very scared of this decision," Eisen said.

The ruling could disrupt the calculus for project developers who have taken a pragmatic view — supported in practice if not by any law on the books — that if a pipeline is constructed and in service, a court is not going to shut it down, said Eisen.

Going forward, Hasselman said, industry may be more cautious in its approach to projects.

"Citizen opposition is not going away, and if they think they can just cram it down people’s throats, they’re wrong," Hasselman said of pipeline builders.

‘Not just a check-the-box inquiry’

Boasberg’s order showed that developers that preemptively choose to put projects in the ground do so at their own risk, said Jennifer Danis, a staff attorney at Columbia Law School’s Environmental Clinic.

"The court will not then hear your complaints of substantial disruption or economic consequences to your endeavor to override the importance of NEPA and the potential environmental impacts, not having properly looked at the consequences of the project," she said.

It’s noteworthy that the Dakota Access ruling came from the D.C. district court, which hears many oil pipeline cases and cites legal precedent from the U.S. Court of Appeals for the District of Columbia Circuit for vacating approvals for NEPA violations, Danis said. The D.C. Circuit frequently hears disputes over natural gas pipelines.

"I think the application and examination of D.C. Circuit law really makes it significant," she said. "It reminds litigants that NEPA is not just a check-the-box inquiry."

He suggested the ultimate fate of the pipeline would be a political decision by the next administration.

Energy Transfer told E&E News that it is holding off for now on complying with Boasberg’s order as it goes through the appeals process.

The pipeline developer renewed its stay request in D.C. district court yesterday, after Boasberg declined earlier this week to issue a provisional freeze on his order.

Energy Transfer called the shutdown of the interstate pipeline, which has been operational for three years, "literally unprecedented." The company warned that stopping the project would cost billions of dollars and put "many thousands" out of work as the nation struggles to fend off economic collapse during the coronavirus pandemic.

The project is also still accepting nominations from shippers in August as it goes through the established legal process for challenging the court decision.

"We believe Judge Boasberg exceeded his authority and does not have the jurisdiction to shut down the pipeline or stop the flow of crude oil," Energy Transfer spokesperson Lisa Coleman said in an email.

Boasberg’s order this week followed his finding in March that the Army Corps had violated NEPA by choosing to conduct a less intensive environmental assessment to evaluate the risks of the pipeline crossing beneath Lake Oahe.

Boasberg vacated the approval for the crossing and ordered the Army Corps to go back and complete a more rigorous environmental impact statement. The judge also sought additional briefing on what the fate of the pipeline should be as that environmental review process was ongoing.

While the court’s decision is certainly noteworthy, the judge’s justification for his decision was not, said Elizabeth Klein, deputy director at the NYU School of Law’s State Energy and Environment Impact Center.

"It’s not a remarkable or unique or earth-shattering NEPA decision," she said.

Klein noted that those who subvert the NEPA process should have to suffer consequences for their decisions.

"I think what’s unusual," she said, "is for the project proponent and the corps to have gotten so far down the line knowing how risky it was to do that."