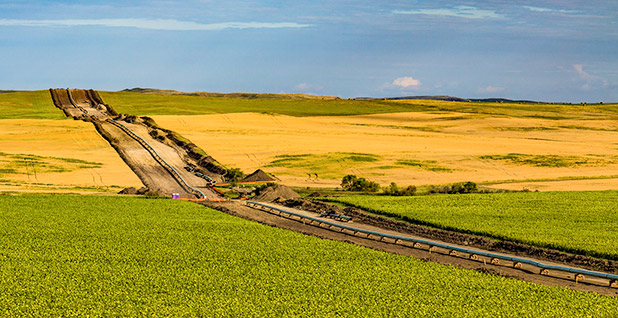 An Army Corps of Engineers analysis of the Dakota Access pipeline could be an early test of the Trump administration's new regulations on the National Environmental Policy Act. Construction of the pipeline near New Salem, N.D, is pictured. Tony Webster/Flickr

A court-ordered environmental analysis of the Dakota Access pipeline may suffer from fatal flaws if it is conducted under the Trump administration’s new National Environmental Policy Act regulations, some legal experts say.

The U.S. Court of Appeals for the District of Columbia Circuit last week upheld a lower bench’s requirement for the Army Corps of Engineers to conduct an environmental impact statement (EIS) to support the agency’s permit for the 1,172-mile crude oil pipeline to cross beneath Lake Oahe, which straddles the Dakotas.

She said she will be watching to see whether the D.C. Circuit reaches a similar conclusion as it weighs whether Boasberg, an Obama appointee, correctly required an EIS.

The Army Corps declined to comment on the status of its analysis, but Earthjustice attorney Jan Hasselman, representing the Standing Rock Sioux Tribe in the case, said the agency hadn’t yet begun work on the review.

If the Army Corps begins drafting its EIS on or after Sept. 14, then the White House Council on Environmental Quality’s new implementing regulations under NEPA would apply to the analysis.

Attorneys tracking the case say that drafting the review under the new regulations would markedly alter the scope of the EIS and could trigger new litigation over the NEPA rules’ alignment with the bedrock environmental statute.

Among other changes, the Trump administration has moved to eliminate consideration of cumulative effects and downplay the inclusion of indirect effects of projects in analyses.

CEQ has billed the revisions as cutting down on "burdensome" regulations by speeding up the permitting process and providing more clarity to project developers about their legal requirements (Energywire, July 16).

‘A million ways’ to dodge NEPA

An additional change to watch will be how the Army Corps treats "reasonable alternatives" in its analysis of the Dakota Access pipeline.

The new NEPA regulations set parameters for considering alternatives that are "technically and economically feasible" and "meet the purpose and need of the proposed action."

Alternatives must also "meet the goals of the applicant" — in this case, Dakota Access developer Energy Transfer Partners LP.

"I can just see a million ways to shoot down any possible alternative you come up with using these three new criteria," said McCoy. "Especially because it’s such an odd situation where the pipeline is already built and in operation."

Three newly launched lawsuits over the new NEPA regulations could also be a complicating factor in how the agency goes about drafting the EIS, if the fates of the regulations themselves are uncertain. That could mean the agency may choose to include more analysis than what the new regulations recommend.

"Probably the Army Corps’ biggest concern will be that this sticks in court," said James Coleman, an associate professor of law at Southern Methodist University. "So I wouldn’t be surprised if they say, ‘You know what, this isn’t what you asked us for; even though this is no longer required, we’re going to do it anyway.’"

Because the new NEPA rules were so recently finalized, the Army Corps has not yet had time to draft its own agency-specific requirements in response to the changes.

The agency would be in the unusual position of following CEQ’s regulations in drafting the analysis, said McCoy.

If the agency completes the EIS under the new regulations, then the Army Corps could find itself back in court arguing over whether the rules — as applied in writing the EIS — comply with the underlying statute, said Dan Farber, a law professor at the University of California, Berkeley.

"I think it’s important to keep in mind that Congress did not give CEQ the power to issue legally binding rules," Farber wrote in an email. "That means that its interpretation of NEPA should only get a limited amount of deference in the courts."

Court watchers are also tracking whether the Trump administration or Energy Transfer Partners will try to make the argument that an EIS is no longer needed, based on CEQ’s recent decision to eliminate the standard for initiating review under NEPA when a project is deemed "highly controversial."

The Army Corps’ failure to meet this standard was at the heart of Boasberg’s finding that the agency had violated NEPA and must complete an EIS.

"I think it’s a completely reasonable argument," said Coleman, "but the problem is, I think it’s unlikely to prevail."

He noted that CEQ would want to avoid situations where a court could declare the new NEPA rules invalid.

"You’d be putting your regulation in a lot of danger if the first time a court talks about it … they would have to reverse their earlier opinion to agree with you," Coleman said.