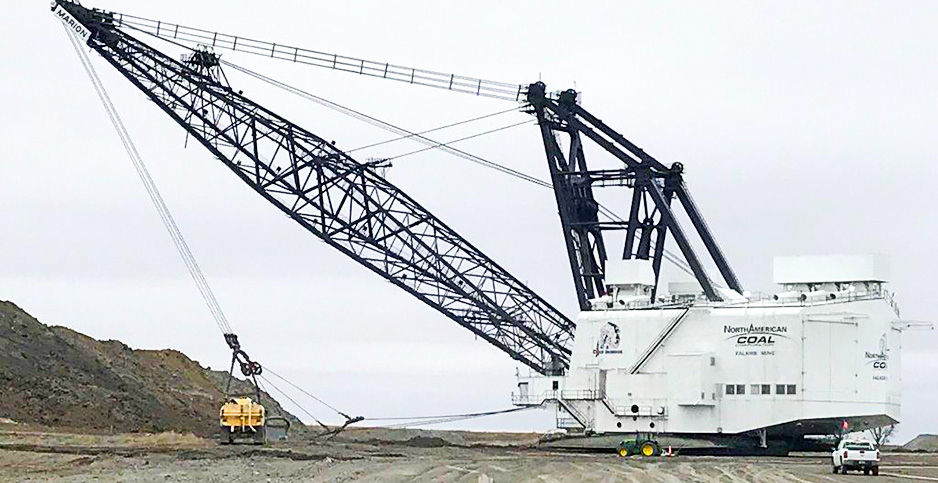 Chief Ironsides, one of two 7,000-ton walking draglines at Falkirk mine in Underwood, N.D. The machine is used to excavate up to 65 feet of overburden that lies atop the mine's lignite coal seam. Photo by Daniel Cusick.

The first in a two-part series on changing electricity markets in North Dakota.

UNDERWOOD, N.D. — From the cab of the 7,000-ton dragline Chief Ironsides, the gray-brown subsurface of central North Dakota is peeled back in 160-ton bucket loads, revealing a 10-foot-thick seam of lignite that runs like a ribbon through the rolling plains north of Bismarck.

This is the fuel that made North Dakota a fossil energy state long before the Bakken Shale produced its first barrel of oil. And for places like Underwood — home of the sprawling Falkirk mine and its primary customer, the 1,100-megawatt Coal Creek Station — it is the lifeblood of a regional economy centered on coal and coal-fired power.

More than industrial behemoths on the Dakota plains, these facilities — along with four additional lignite mines and five coal plants clustered in the Missouri River basin — are the workhorses of North Dakota’s electricity sector.

They deliver up to 4,000 MW of power daily to utilities and cooperatives across the state, and through wholesale power markets North Dakota electrons can flow to consumers as far away as Michigan, Illinois and Louisiana.

But the risk of disruptive change lies just over the horizon.

On a recent overcast afternoon at Falkirk mine, Stuart Schlosser, the operator of Chief Ironsides’ cockpit-like controls, talked about the shift that is happening across North Dakota’s energy economy.

Its outlines can be seen just 30 miles down Highway 83 near the town of Wilton, where 66 commercial wind turbines rise like industrial pinwheels, converting North Dakota’s Class 4 winds into roughly 100 MW of emissions-free electricity.

"There’s getting to be a lot of them out there," Schlosser, 44, said of the state’s wind farms, which comprise more than 1,500 windmills across nearly 30 sites.

The wind farms are helping utilities like Basin Electric Power Cooperative, the state’s largest electricity provider, meet electricity demand in Bakken boomtowns like Dickinson and Williston to the West.

Wind is also helping North Dakota electricity producers diversify their fuel portfolios beyond coal, which still accounts for roughly 70 percent of the state’s generation capacity, according to the U.S. Energy Information Administration.

By 2019, Basin expects to add 300 to 400 MW of turbines to its 1,300-MW wind portfolio, burnishing its standing as the nation’s No. 1 rural electric cooperative for wind energy deployment, according to data from the American Wind Energy Association.

But Basin’s embrace of wind energy isn’t born of a strong preference for renewable energy, or even clean energy mandates like those in neighboring Minnesota requiring utilities to meet a percentage of retail power sales using renewable resources. North Dakota’s renewable energy law, a voluntary 10 percent standard, is among the weakest in the nation.

For Basin and other North Dakota power generators, the migration to wind has been about choosing the cheapest, most readily available generation resource, as well as projects that can be easily permitted and constructed.

Power producers are also motivated by a desire to participate in wholesale electricity markets, where wind represents a growing share of generation in markets overseen by the Southwest Power Pool and the Midcontinent Independent System Operator.

Coal, while both inexpensive and abundant in North Dakota, no longer fits the ideal market profile, especially as utilities, consumers and regulators transition toward inexpensive natural gas and other low- and zero-emissions energy resources, such as solar and wind.

"When you grow, you look to see what you can get done in the most expedient and cost-effective manner," Paul Sukut, Basin’s CEO and general manager, said in a recent interview.

"Permitting a coal plant is nearly impossible these days. You just can’t get it done," he added. "What we can get permitted and financed is wind and natural gas, so that’s what we’ve been doing."

Similar forces are playing out for other power generators in the state.

They include Great River Energy, which ships all of its Coal Creek Station generation to Minnesota along a high-voltage direct-current transmission line; Minnkota Power Cooperative of Grand Forks Inc., which provides electricity to roughly 150,000 rural cooperative members in eastern North Dakota and northwestern Minnesota; and Montana-Dakota Utilities Co., with 143,000 power customers in North Dakota, Montana, South Dakota and Wyoming.

Like Basin, these companies have multimillion-dollar stakes in North Dakota’s lignite industry, and most are wrestling to balance their long-term commitments to coal against a rising tide of cleaner, cost-competitive renewables and natural gas.

Those economic pressures, combined with rising costs to meet environmental standards, prompted Great River Energy — which is headquartered in the Minneapolis suburbs and whose customer base is almost entirely in Minnesota — to shutter one of its three North Dakota coal plants just this spring.

The recent closure of the 187-MW Stanton Station — which switched from locally sourced lignite coal to imported Powder River Basin coal a decade ago — sent a shock wave through North Dakota’s coal sector that continues to reverberate today.

At last month’s annual meeting of the Lignite Energy Council, the state’s chief lobbying organization for coal mining and coal-fired power industries, industry executives joined politicians and others to bind up some of the wounds caused by Stanton’s closure and to chart a course for the industry’s future.

"We recognize that there are many challenges, and that starts with the tremendous overregulation that you’ve experienced in recent years," Republican Sen. John Hoeven told the council.

"And that’s one area where we are making real and significant progress," he added, citing the recent rollback of U.S. EPA rules prohibiting the discharge of mining waste into streams and the Trump administration’s lifting of a freeze of new coal mining leases on federal lands.

Schlosser, the Falkirk dragline operator, said he’s "all for wind," but he believes the federal production tax credit, which provides more than 2 cents in tax relief for every kilowatt-hour of wind energy produced by eligible wind farms, has become a threat to his career.

"It kind of chaps you when you pay your taxes and that money is going to something that’s putting you out of work," he said.

Yet even as those pressures mount, utilities continue to seek ways to keep lignite at the center of their resource planning, and most of the state’s large power plants have undergone extensive environmental upgrades to meet state and federal rules concerning air and water emissions.

Great River, for example, has promised to continue operating the Coal Creek Station at Underwood and has coal delivery contracts with Falkirk Mining Co. through 2045, although executives say the plant will undergo more up-and-down cycling than it previously experienced. Great River has also touted the success of its recently completed advanced coal plant, called Spiritwood Station, with a capacity of 99 MW.

At both Coal Creek and Spiritwood, Great River is using a technology called "DryFining" that removes moisture from lignite pre-combustion, helping the coal burn more efficiently and with lower emissions per unit of energy. Waste steam from Coal Creek and Spiritwood is also piped to co-located ethanol plants, and at Spiritwood, agribusiness giant Cargill Inc. has co-located a major barley malting facility to meet North American demand.

North Dakota officials have championed such efforts, holding out hope the further development of advanced agricultural facilities and bio-energy parks, where lignite power generation is paired with biofuels processing, will help both industries compete in highly competitive marketplaces.

Officials are also working hard to develop and deploy other clean coal technologies, including a process called the Allam Cycle that involves gasifying lignite coal and pressurizing traditionally wasted carbon dioxide to help drive a turbine generator. Excess CO2 is collected from the combustion cycle, where it can be captured, stored and shipped for other uses such as enhanced oil recovery.

In addition to synthetic natural gas, the synfuels plant produces a half-dozen commercial products, including phenol, liquid nitrogen anhydrous ammonia. It also pipes roughly 152 million cubic feet of CO2 daily to Saskatchewan, where it is used by the oil industry.

Such innovations do not, however, diminish the more immediate threat that many North Dakota coal and utility officials, and their proponents, see from the steady march of new wind energy development occurring in the state.

Robert "Mac" McLennan, Minnkota Power’s president and CEO, said last month that his company has been actively engaged in procuring new wind power, even as those decisions place more pressure on the company’s 40-year-old coal plants to produce power more cleanly, more efficiently and at prices lower than ever.

But in places like North Dakota, weather can trigger rapid shifts in energy demand, including disruptions to pipeline, truck and rail deliveries. As such, utilities like Minnkota must have ready-reserve power to meet demand, a role the state’s mine-mouth coal plants have performed for decades.

Minnkota’s primary baseload plant is the Milton R. Young Station near Center, N.D., which has been producing more than 700 MW of low-cost electricity since the 1970s and has undergone nearly a half-billion dollars in environmental upgrades since 2006.

As evidence of coal’s importance to keeping North Dakota’s lights on, McLennan pointed to the 2014 polar vortex, an event that triggered a massive spike in energy demand and prices as consumers turned up thermostats to beat back subzero temperatures.

The Young power plant, as well as North Dakota’s lignite burners, provided critical power during the emergency, he said, not only for Minnkota’s ratepayers, but for millions of additional consumers throughout the Midwest and Great Plains.

"I still think we can compete on the lignite side, but we have to demonstrate the real value of those baseload assets," McLennan said.