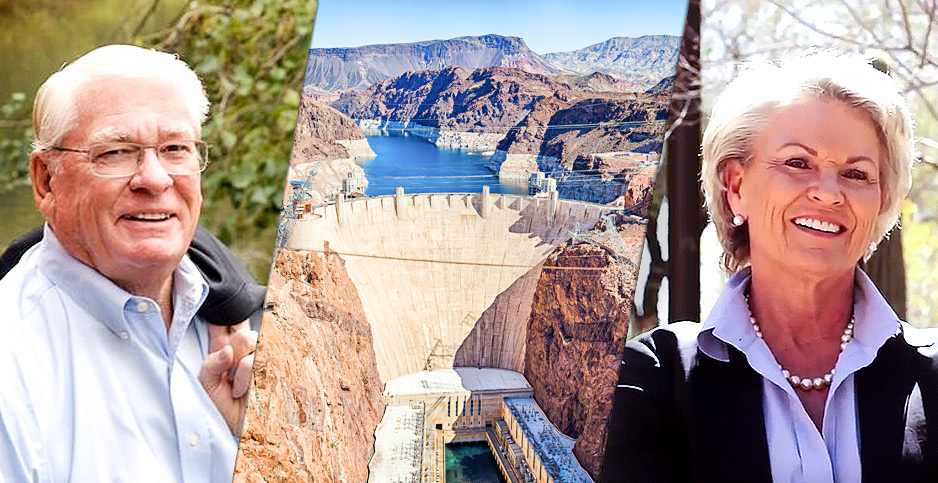 As the West struggles with climate change, drought and rapid population growth, talk about the region’s deepening water woes often boils down to a simple but complicated question.

Build more dams and other infrastructure, or ramp up conservation?

Patricia Mulroy, the former general manager of the Southern Nevada Water Authority, is one of the Colorado River Basin’s most creative water managers. As Las Vegas’ water chief, she secured fuel for the city’s breakneck development. She’s a strong proponent of conservation while pushing for major infrastructure projects that have drawn environmentalists’ fire.

"They bracket opposite ends of the spectrum," he said.

Former Reclamation Commissioner Beard has a message for his former agency: You’re no longer needed.

In "Deadbeat Dams," Beard calls for abolishing the bureau and tearing down one of its largest dams.

Beard, 74, served as commissioner for more than two years in the Clinton administration. He says the bureau — the largest wholesale water utility in the country — should be disbanded. And he recommends tearing down Glen Canyon Dam, the 710-foot behemoth monolith that impounds Lake Powell on the Colorado River, as well as many other dams across the country.

Glen Canyon Dam was the pet project of Floyd Dominy, the politically savvy Reclamation commissioner that was a driving force behind the dam-building boom of the 1950s and ’60s.

When President Clinton nominated Beard to be commissioner in 1993 after a lengthy career as staff director of the House Interior Subcommittee on Water and Power (now part of the Natural Resources Committee), Beard said he "had a moment of dog catches car."

"What do you do?" he recalled.

Beard — along with Babbitt — went about reforming the bureau.

"The first thing I said was, ‘We are an environmental organization. We are not a dam-building organization,’" Beard recalled.

In the bureau’s Denver offices, he changed the names of conference rooms from iconic dams to famous waterways. He redesigned the bureau’s logo, removing the image of a dam. And his work — which was controversial among entrenched water interests — reverberated throughout the West.

"The Bureau of Reclamation used to be one of the worst federal agencies in existence. It used to be horrible," said Douglas Kenney, a leading water expert at the University of Colorado Natural Resources Law Center. "Dan was the guy that was there when the agency really changed. And now I think it’s one of the best agencies in the country."

Paul Bledsoe, a senior fellow at the Progressive Policy Institute who worked with Beard during his time at the bureau, agreed.

"Dan is a visionary who recognized that the era of dam building was largely over in the western United States," he said. "He was really effective and taking on a culture that had been about dam building."

Despite those successes at the bureau, Beard is the first to say that Western water management hasn’t changed much.

"When you talk to water professionals, somehow building something — anything — even though it doesn’t solve the problem, is better than not building something," he said. "It is sort of like concrete over common sense."

"They are relics of antiquated thinking," Beard said. "They are the least effective way to address today and tomorrow’s problems. We are not going to build our way out."

Beard’s book is in many ways a screed against the water management practices of the last half century. He blasts the government for catering to "water nobility," those that reap the rewards of beneficial water policies such as subsidized water for agriculture.

And he says the Bureau of Reclamation is no longer needed, arguing that local and state entities are better equipped to manage and build necessary water infrastructure.

"I’ve come to the conclusion that you can’t teach an old bureaucracy new tricks," he writes in the book.

He has drawn criticism in the water world.

Anne Castle, a former assistant secretary of Interior for water and science during the Obama administration, said the book is misleading.

"While ‘Deadbeat Dams’ makes some good points, it contains significant inaccuracies and offers unrealistic and overly simplistic solutions," she said. "It’s good for sound bites, but not policy."

“The first thing I said was, ‘We are an environmental organization. We are not a dam-building organization.'”

Daniel Beard, commissioner of the Bureau of Reclamation in the Clinton administration

To Beard, the future of water management in the West is efficiency and conservation.

Notably, he disagrees with the notion that population growth requires developing and delivering more water. Total consumption, he notes, has dropped since 1970, despite huge population gains in major Western cities. He highlights studies suggesting California could save one-third of its existing urban water use through various conservation technologies.

And he points to research from the nonpartisan Pacific Institute that concluded California could generate enough water to fill Shasta Lake, the state’s largest reservoir, three times over through agricultural and urban efficiency measures, reuse, and stormwater capture. That would be enough water — up to 14 million acre-feet — to feed 20 cities the size of Los Angeles annually.

Beard says there is little room left for new water development. The best places to build dams already have them, and water in many major rivers is overallocated.

The government should also re-evaluate existing dams, Beard says, and consider whether it is worth removing them.

In his book, he argues that Glen Canyon Dam should be torn down, which would help the Colorado River fill Lake Mead behind Hoover Dam. The country’s largest reservoir, Lake Mead is currently depleted to near crisis levels.

Glen Canyon Dam was Dominy’s passion project, and he used all of his political connections to cajole and bully it into existence. But Beard notes that former Arizona Sen. Barry Goldwater (R) and former Arizona Rep. Morris Udall (D) both said late in their lives that Glen Canyon Dam shouldn’t have been built.

"Once we build a dam, we somehow think it’s a permanent part of the landscape," Beard said. "But it’s not."

For nearly three decades, Mulroy was Las Vegas’ water czar. She had an outsized influence on the management of the Colorado River.

Charismatic and strong-willed, she relentlessly chased — and obtained — the water necessary for Las Vegas’ rapid development in the 1980s and ’90s as the general manager of the Southern Nevada Water Authority.

She became a well-respected and feared lightning rod in the water world. To her fans, she was a no-nonsense leader who got things done. To her critics, she was Nevada’s "water witch," a nickname she laughs at — even briefly hanging a broom in her office.

Mulroy, 64, sought water rights to aquifers north of Las Vegas. She convinced other states to draw less water from the Colorado River, arguing that the fates of all seven states in the basin were intertwined. And she threatened at times to sue other states.

She spearheaded major infrastructure projects. Under her leadership, Nevada built two new intakes from Lake Mead on the Colorado River, where Las Vegas gets 90 percent of its water. The last, or "third straw," was completed in 2014, cost $817 million and will allow Nevada to draw water from Lake Mead even if its surface drops to a level known as the "dead pool," where the Hoover Dam’s existing intakes can no longer send water downstream.

The new intake means that Las Vegas arguably has the most secure Colorado River water supply in the basin since it will be able to draw from Lake Mead when others cannot.

Mulroy retired in 2014 and is now a senior fellow at the Brookings Institution’s Mountain West program at the University of Nevada, Las Vegas, as well as Brookings’ Metropolitan Policy Program. She does consulting work around the globe and has recently met with leaders in China, the United Kingdom and Singapore.

She advocates for an "all of the above" approach to water management.

"Whatever opportunity presents itself to store water, I think it needs to be taken advantage of," she said.

Mulroy emphasizes that climate change is having significant impacts on water in the West. And she points to science suggesting the 21st century will be drier than the 20th.

"We as a country have been incredibly spoiled," she said. "We have been able to use as much water as we wanted. I don’t think the future it going to allow us to continue down that path, especially in the western United States."

Infrastructure should be developed to be used in a conjunctive model, meaning multiple sources of water — groundwater, reservoirs, desalinization plants, for example — can be used, or not used, depending on circumstances.

Mulroy also criticizes environmental regulations that stymy projects, as well as green groups who seek to block them universally.

Environmentalists, she said, frequently "pull environmental regulations out of their hip pocket."

Brown’s $15.7 billion proposal to build twin tunnels under the Sacramento-San Joaquin River Delta is a textbook example, she said.

The tunnels, she said, are a necessary conveyance structure to secure water deliveries from the northern part of the state to the south.

Mulroy said the tunnels are imperative because it would allow the Metropolitan Water District of Southern California, the country’s largest water supplier, to potentially reduce its take from the Colorado River.

The calculation for whether to build new infrastructure, Mulroy said, is based mainly on when new water sources must be available.

"You either have to pull the trigger, or you are willing to put your community at risk," she said.

The third intake from Lake Mead, and now a low-lake level pumping station to move that water (cost: $650 million), illustrates that balance, she said.

"The consequences of pushing it off and being wrong are far more dramatic," Mulroy said.

Rob Mrowka, who as environmental planning manager for Clark County, Nev., clashed with Mulroy, praises her as "very smart" and "very knowledgeable."

"But her blind spot was that she was so beholden to the growth industry and the casino industry that she refused to see the facts on the wall," Mrowka said. "She did not take a logical view of the long-term picture given climate change and everything else. There is just not enough water to continually fund growth."

Mrowka, who has since worked for the Center for Biological Diversity, and other groups have filed lawsuits challenging another Mulroy infrastructure proposal: A more-than-200-mile pipeline to deliver water from aquifers in the central and eastern parts of the state to Las Vegas. It would cost between $3.2 billion and $15 billion, depending on who is estimating. The project is currently tied up in court.

Mulroy said the pipeline was intended as a "last-ditch effort in the event that the Colorado River collapsed."

And she bristled at the growth criticisms.

To her credit, Mulroy also implemented conservation measures. Southern Nevada recycles nearly all of its indoor water, and the water authority says per capita water use in southern Nevada has dropped by 38 percent since 2002.

But Las Vegas still uses more water than other major Western cities by some measures. Southern Nevada used around 205 gallons per capita per day in 2014, according to U.S. EPA. That represents a sharp decline from 2003, when it used 314 gallons per capita per day, but it’s still well more than San Francisco (about 50 gallons) and Los Angeles (about 104 to 131 gallons).

(The Southern Nevada Water Authority says that number drops to about 123 gallons per capita per day if the amount of water recovered and returned to the Colorado River system is accounted for.)

Mulroy said conservation has to continue. But so must other initiatives, including new infrastructure.

There is no easy answer.

"We always look for a silver bullet," she went on. "That’s how the West was built — one silver bullet project after another. That’s not what the future is about."