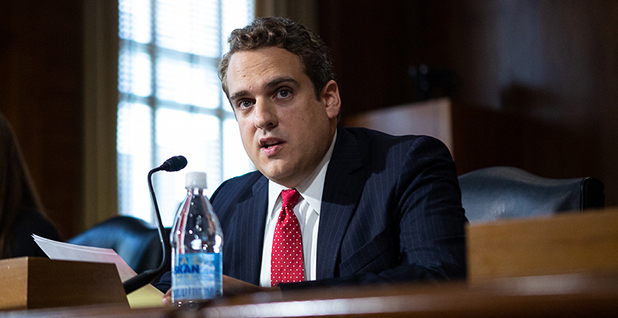 Newly appointed Federal Energy Regulatory Commission Chairman James Danly (R) has canceled the agency’s monthly media briefings and will not take interviews with the press, according to an announcement yesterday that drew criticism from advocates for government transparency.

The staunch conservative views his role "as that of an adjudicator; therefore he will not be conducting briefings or any meetings with the news media," according to an email from a FERC spokesperson.

Tyson Slocum, energy program director at watchdog group Public Citizen, called the move "inappropriate" and said the FERC chairman acts not only as an adjudicator but also as a regulator who is accountable to the public.

"A regulator working in the dark away from the questions posed by a free press is not a regulator operating in the public interest," Slocum said.

The White House has not offered a reason for Chatterjee’s demotion and declined to comment for this story.

James Bacon, director of operations for the Presidential Personnel Office, yesterday told the Washington Examiner that the White House was trying "to do Chatterjee a favor by not embarrassing him publicly with an announcement" but also declined to offer a reason.

Chatterjee, along with several observers, attributed his demotion to his efforts to boost renewable resources and enable states to implement a carbon tax in competitive wholesale markets, a move that continues to gain traction among fossil fuel generators. Sources said Chatterjee’s refusal to comply with a White House missive to curb diversity trainings also played a role.

"FERC’s actions demonstrate that it understands that states require an effective avenue to implement state carbon policies in alignment with competitive wholesale markets and their benefits for consumers," Dena Wiggins, NGSA president and CEO, said in a statement.

"Carbon pricing achieves deeper emissions reductions at a lower cost than many of the prescriptive policies used today, all because it provides the right incentives for both energy consumers and producers," Wiggins said.

Critics of the move, including Danly, have questioned whether it exceeded FERC jurisdiction. And the new chairman is not expected to act on the carbon pricing proposal during his short tenure (Energywire, Nov. 9).