Data center or power plant? In Wyo., it’s both 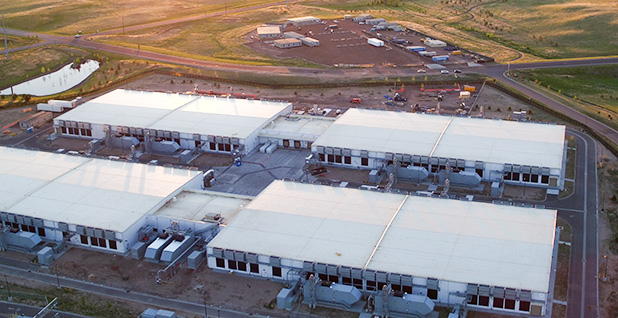 Microsoft Corp.'s new data center in Wyoming will also act as a sort of peaker plant, occasionally sending electricity back to the grid from its backup generators. Photo courtesy of Microsoft.

In 2012, the governor of Wyoming made an exciting announcement: Cheyenne, the state’s capital, would be the home to a huge new Microsoft data center. Then things got complicated, in ways that happen these days when a technology company demanding clean power meets a coal-heavy power grid.

The first problem was that the data center’s projected power demand, 200 megawatts, would almost double the amount of electricity needed in little Cheyenne.

The second, tougher problem was that the standard industry solution to the first problem — build a new coal-fired power plant — just wasn’t going to happen. The Obama administration’s Clean Power Plan had cast the future of high-emission coal power into doubt. Besides, the utility, Black Hills Energy, couldn’t envision building a 40-year power plant for Microsoft, a part of the fast-moving tech business, where companies’ big schemes can go poof overnight.

Then Microsoft and Black Hills struck on a novel solution that might have far-reaching implications for the relationship between utilities and electricity-hungry data centers.

Black Hills will buy power for Microsoft on the open market, and if there are any shortfalls, the utility will reach behind Microsoft’s meter and tap the data center’s backup generators, which are capable of producing many megawatts of power but mostly stand idle.

"We both kind of had an ‘aha’ moment," said Chris Kilpatrick, the director of resource planning for Black Hills. "We’re building double capacity."

The plan, which got final approval from Wyoming’s utilities commission in July, essentially turns the data center into a peaker plant. These plants go live only at rare times of peak demand, and utilities have struggled with how to plan and pay for them in an era when getting approval to build new fossil fuel power plants has never been harder.

It is the latest episode in a tug of war between states that like to power their grids with abundant local coal (like Virginia, North Carolina and Wyoming) and the big tech companies (like Google, Facebook and Apple) whose huge, energy-slurping data centers are the linchpins of the modern digital era. They have made ambitious plans to power themselves with renewable energy, and have declared their intention to use their market power to force coal states to offer cleaner options (EnergyWire, May 23).

The deal also puts Wyoming — which has fewer people than Brooklyn and more coal than any other state — in the rare position of being at the cutting edge of both data-center design and energy policy.

"We’re doing this not in California, not in New York," said Brian Janous, Microsoft’s director of energy strategy, naming two states that are synonymous with technology and forward-thinking energy policy. "We’re doing it in Wyoming."

Back that grid up

If successful, the Microsoft-Black Hills plan will prevent the building of any new power plants, aside from the generators that Microsoft will build.

Those backup generators are essential because a power outage would hobble Microsoft’s internet operations. The company’s cloud-computing platform, Azure, is the world’s second-largest and carries out key operations for companies and governments around the world.

Now they will also be crucial to the operation of Cheyenne’s grid.

The heart of the plan is a new tariff approved for Cheyenne by the Wyoming Public Service Commission (PSC) that for now has exactly one qualifying customer: Microsoft.

The tariff is intended for big industrial customers that use at least 13 MW of electricity, have a significant amount of on-site backup power, and are willing to have the power company access that power source to make up for power deficits and keep the grid reliable. (Cheyenne’s two biggest existing power users, an explosives manufacturer and a petroleum refinery, sought to be included in the tariff but were rebuffed, partly because of a lack of backup power.)

The tariff will kick in when Microsoft’s load exceeds 35 MW. Microsoft is tight-lipped about its precise power usage, but Janous said it will cross that threshold soon.

The data center’s heavy power needs are expected to have almost no financial impact on Black Hills’ 41,000 other customers in Cheyenne. Microsoft is paying for a substation and transmission line, Kilpatrick said, and the tech giant will pay Black Hills back for the power it buys.

"This solution makes common and strategic sense for everyone involved," the Wyoming Office of Consumer Advocate wrote in the PSC’s final decision.

The new tariff arrives as Wyoming’s economy and parts of its power grid are struggling with a wrenching contraction in the coal industry.

Even as Cheyenne projects a doubling of its load because of Microsoft, the opposite is happening at the other end of the state, in the Powder River coal fields. The economy is struggling as climate worries have sent large coal producers into bankruptcy (ClimateWire, April 11).

There the local utility, the Powder River Energy Corp., has seen its profits drop by 18 percent a year, according to Alan Minier, the chairman of the PSC, in an interview.

Carbon emissions loomed large in the creation of Microsoft’s new data center, but in a different way.

At the outset, Black Hills balked at the prospect of building power plants for Microsoft, partly because of two looming uncertainties: the possibility that a new regional transmission organization could shake up Wyoming’s power market, and uncertainty around the Obama administration’s Clean Power Plan, which has been stayed in the courts (ClimateWire, July 27).

"This is a particularly inopportune historical moment to pursue construction of new generation assets," the PSC noted in its tariff decision.

A further question mark was Microsoft itself, which is racing to keep pace in the fast-changing world of cloud computing and data centers. It doesn’t have a firm timeline for building out its data center and cannot be counted on to stick around for the 40-year life span of a power plant.

"This scale of what was being required, and the potential for having the customer walk away from the thing on short notice, coupled with the volatility we were told about, meant that it would be a really bad idea to build a gas plant," Minier said.

Carbon emissions, renewable energy and the bottom line all seem to have played a role in Microsoft’s wooing of Cheyenne.

Backup generation is typically in the form of diesel-powered generators, which have high emissions. Janous said that this will be Microsoft’s first large data center to run on generators powered by natural gas, which is plentiful and cheap in Wyoming and has a smaller carbon footprint than diesel.

It is likely that Microsoft will have to fire up these generators in service of Cheyenne’s grid only rarely, possibly less than 100 hours a year, Janous said.

However, it is possible that in the future, Microsoft’s generators could play a larger role on Wyoming’s grid — in filling in the gaps around renewable energy sources, like solar and wind, that aren’t always available.

"This type of installation is somewhat uniquely suited to provide the sort of quick responsiveness that will be necessary to integrate greater levels of renewables in the region," Janous wrote in an email, adding, "We look forward to sharing more news about renewable energy at this location in the near future."

That would dovetail with efforts that Microsoft and other data center titans to persuade coal-friendly states to go renewable.

In North Carolina, for example, Google leaned hard on Duke Energy Corp. to allow it, along with other big power customers, to buy the output of a big solar farm and use it to offset the power needs of its data center. In Virginia, Microsoft brokered a three-way deal between Dominion Virginia Power and the state government that for the first time allowed Microsoft to claim the output from a 20 MW solar plant.

Under the new tariff, the data center’s generators would be called upon if no power could be found at the right price nearby. But the grids surrounding Cheyenne produce abundant excess capacity.

"That’s a very clever play," said Jack Pouchet, a board member of the Green Grid, an organization that seeks greater efficiency at data centers (Microsoft is also active in the group). "Kudos to Microsoft for realizing that there’s way more natural gas than we know what to do with in that area, and use it."