David Banks had a plan to re-enter climate pact 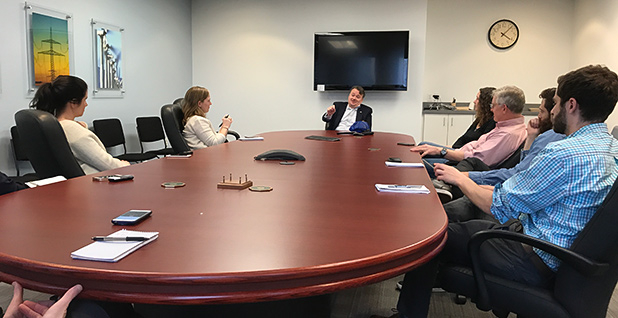 The year 2020 was when the United States was supposed to return to the Paris Agreement.

That was the plan of George David Banks, who until seven days ago was the White House’s top adviser on international energy and environment issues.

Banks was on the losing end in the skirmish last year over whether the U.S. should remain part of the landmark 2015 climate deal when President Trump announced plans to withdraw in June. But the president continues to hint at a possible return to the deal if the right terms are found — most recently in a televised interview with Piers Morgan from Davos, Switzerland. And Banks told E&E News on Friday that a reversal could help Trump win a second term.

Election year could be an advantageous time for Trump to reconsider, Banks said. For one thing, the rules of the deal make it impossible for the United States to formally withdraw until November of that year — one day after the election. And Trump will host the Group of Seven major developed countries in 2020; its members overwhelmingly support the Paris deal, and they promise to cheer loudly if the world’s second-largest emitter decided to stay in the deal.

Trump’s role as leader of the G-7 could help him find an elegant reversal on Paris.

"You get to control the agenda, you get to control all the conversation," noted Banks. "The president theoretically could walk out of the meeting with heads of state and say that he had renegotiated the Paris Agreement."

Speculation has swirled for months about the tweaks or concessions that might bring Trump back into the Paris accord, after his blistering rejection of the deal on June 1 in the White House Rose Garden. Ideas for re-engagement — termed "renegotiation" until foreign leaders protested — ranged from a new trade deal to concessions in the Paris rulebook that would favor the U.S. over major developing emitters, like China.

But Banks told E&E News that the key component of a Paris return would be a change to the United States’ voluntary emissions reduction commitment, known in U.N. parlance as the nationally determined contribution (NDC) to Paris.

Paris Agreement defenders point out the treaty is nonbinding and that President Obama’s pledge of 26 to 28 percent national emissions cuts below 2005 levels by 2025 is aspirational and can be changed at will. There’s no penalty for missing the target, and in fact some countries are already struggling to meet their marks.

Still, U.S. EPA Administrator Scott Pruitt, White House counsel Don McGahn and others appear to have swayed Trump to leave Paris last year by successfully arguing that the president could not stay in the deal and weaken Obama’s pledge. Doing so would open the administration to lawsuits, they argued, and impede Trump’s plans to scrap his predecessor’s emissions rules for everything from power plants to fossil fuels producers.

Banks, Secretary of State Rex Tillerson and members of Trump’s family sought to stay in the agreement, and ultimately lost the fight.

While Banks takes the majority view that countries can unilaterally alter their NDCs, he said the international commitment does have the potential to shape U.S. regulation. So he proposes that, before Trump rolls out potentially new emissions commitments at the G-7 summit in 2020, he first ask both chambers of Congress to bless it with legislation.

Doing so could satisfy conservatives who blamed Obama for joining Paris and offering an NDC without consulting the Senate, Banks said. A group of conservatives, including Trump EPA transition lead Myron Ebell, still hope the Trump administration will submit the Paris Agreement to the Senate as a treaty and watch it fail to receive the two-thirds vote needed for ratification.

But Banks said his plan would put Congress in the driver’s seat on future regulations while avoiding setting a precedent that would make it hard for presidents to enter executive agreements going forward.

"If you want to have some control over the regulatory agenda — you know, putting regulatory reform aside — then what you want to do is to have the ability to approve or disapprove the number because that controls what regulation is pursued to implement and make the target a reality," Banks said. "That’s what I would argue. It’s in the Republican Party’s interest to do that."

But it’s unclear whether Republicans would go for that plan, which Banks said he’d promote more openly now that he has left the White House. While some Republican lawmakers, like Senate Foreign Relations Chairman Bob Corker (R-Tenn.), have said in the past that the United States should retain membership in Paris to keep a seat at the negotiating table, others will be reluctant to support membership in Paris — even with a reduced commitment.

It’s harder to see why Democrats would back the proposal. It could frustrate the ability of future Democratic administrations to set stringent targets by enshrining a role for Congress when establishing each new NDC.

The Paris Agreement encourages all countries to strengthen their commitments every five years, to achieve a long-term goal of avoiding catastrophic warming. The U.S. would have to play catch-up if emissions reductions slow under Trump, who prioritizes the growth of fossil fuels. But Banks said Congress will need to have a role in implementing Paris by setting policies that promote advanced technology and reduce emissions.

"I don’t think that U.S. participation in the Paris Agreement can ever be effective without congressional support," he said.

Banks had planned to remain at the White House through this year’s climate talks in December in Poland, to ensure that the negotiations "land in the right place." That was before he learned that his past use of marijuana prevented him from receiving a permanent security clearance.

Banks said the U.S. delegation is committed to bolstering the rulebook guiding the Paris process, including measures on transparency and emissions accounting. The guidelines should be final at the end of this year.

"You’re trying to correct the flaws of the framework convention, which gives China a competitive advantage," Banks said. "So regardless of U.S. participation in the Paris Agreement, it’s in our interest to negotiate a Paris Agreement rulebook that creates a more level playing field."

Trump has blasted Paris for putting China at a competitive advantage compared with the United States. His belief that China’s Paris pledge is far laxer than the Obama NDC convinced Trump that the U.S. was not getting a fair shake, Banks said. That was critically important for a president who views relationships in zero-sum terms and feels the deck is stacked against the U.S. in trade and multilateral arrangements.

With that competitive issue in mind, Banks said it’s worth noting the U.S. will continue playing an active role in setting the Paris framework.