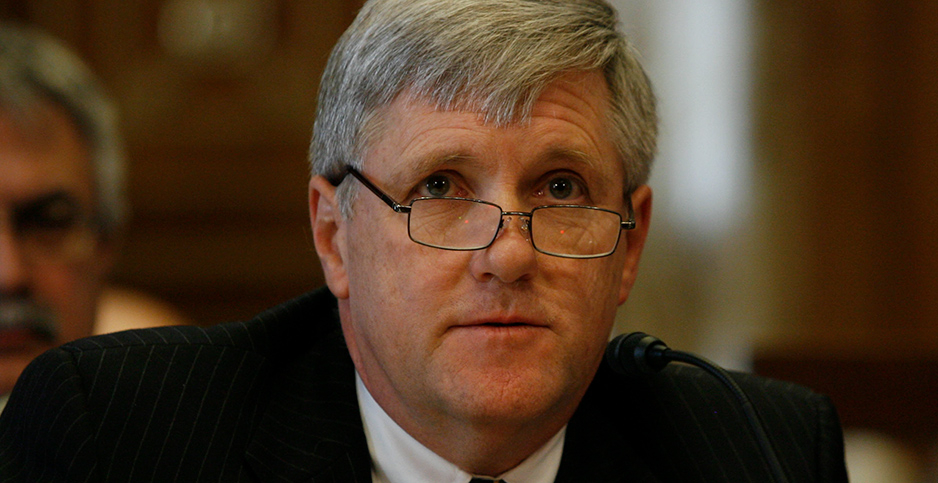 David Hayes, special assistant to the president for climate policy, has called on the Federal Emergency Management Agency to reform its flood standards. James Berglie/Zuma Press/Newscom

A top White House climate adviser denounced "fiscally irresponsible repeat spending on disaster after disaster" and said the government should improve the nation’s resilience to floods and other perils.

Hayes also says Congress should consider giving more disaster money to economically disadvantaged communities, which "face the greatest threats from climate impacts," to ensure that "resources are being directed to the most at-risk communities."

Hayes expressed his views in the latest edition of The Environmental Forum, a bimonthly publication of the Environmental Law Institute, before Biden selected him for a top White House climate job.

Hayes was executive director of the State Energy & Environmental Impact Center at New York University School of Law when he wrote the article, "Preparing for Climate Disasters," with Jessica Grannis and Sarah Greenberger of the National Audubon Society.

The 5,000-word article provides some of the first insights into the Biden administration’s potential strategy for FEMA as climate change causes increased damage through intensifying floods, storms and wildfires.

Although Biden has made climate change a priority for his administration, his proposals have focused on reducing emissions and said little about protecting communities from the effects of climate change.

"He’ll definitely have a role in thinking through the domestic agenda for climate resilience," Grannis said in an interview yesterday, referring to Hayes.

The law institute asked Hayes, Grannis and Greenberger to write an article for its January-February issue on how the Biden administration could promote climate resilience, Grannis said.

Many of the proposals in the article are familiar: "None of these are exactly new ideas," Grannis said. The advocacy of "natural infrastructure" comes as agencies such as FEMA and the Army Corps of Engineers have started promoting the use of wetlands, open space and reefs over traditional flood protection such as levees and walls.

But the article says the federal government must take additional steps to encourage communities to consider using natural infrastructure and to focus on the long-term resilience of post-disaster reconstruction.

"Billion-dollar mistakes will continue to be made" if FEMA remains focused on quickly rebuilding disaster-stricken communities while ignoring long-term durability against climate change, the article says.

The federal government "too often" provides states with hazard mitigation money that "flows to familiar, off-the-shelf engineered projects — whether they represent the best long-term solutions or not," the article adds.

FEMA gives states billions of dollars a year, most of it in the immediate aftermath of disasters to rebuild infrastructure, clean up debris and provide emergency cash to people in disaster zones. The agency also gives states hundreds of millions of dollars a year for longer-term projects aimed at minimizing vulnerability to future disasters such as hurricanes, wildfires and floods.

FEMA and states have long faced criticism for rebuilding communities after a disaster without making them more resilient. The article repeats that criticism: "Gray infrastructure projects like sea walls and other armoring techniques will continue to scarf up a disproportionate share of resilience spending. FEMA already has demonstrated its propensity to be stuck in the do-loop of rebuilding communities in flood zones again and again."

The article says, "FEMA and other federal agencies making coastal resilience grants should insist that states propose the deployment of natural infrastructure projects in concert with, or as an alternative to, gray infrastructure."

Hayes and his co-authors criticize former President Trump for rescinding an executive order signed by President Obama that required new federally funded buildings, infrastructure and homes to be flood-proofed. Groups including the Association of State Floodplain Managers have urged Biden to quickly reinstate the order, which would apply to projects funded with FEMA disaster money.

The article focuses on a new FEMA program — Building Resilient Infrastructure and Communities — as an opportunity to encourage states to spend federal money on "nature-based resilience strategies." FEMA plans to disburse $500 million this year to states for mitigation efforts such as moving buildings out of floodplains and strengthening building codes.

It is the first year that FEMA will allocate money through the program, which Congress authorized in 2018.

But the article adds that the new program could be "a massive lost opportunity" if FEMA does not help states understand the benefits of natural infrastructure.

"The incoming Biden administration must not allow this to happen," the article says.

Without improved analysis, the article says, federal agencies "are likely to continue to overvalue the benefits of environmentally harmful short-term solutions like shoreline armoring while not fully accounting for the environmental and social benefits delivered by natural solutions."