David Vela’s reversal of fortune: ‘D.C. is a fickle place’ 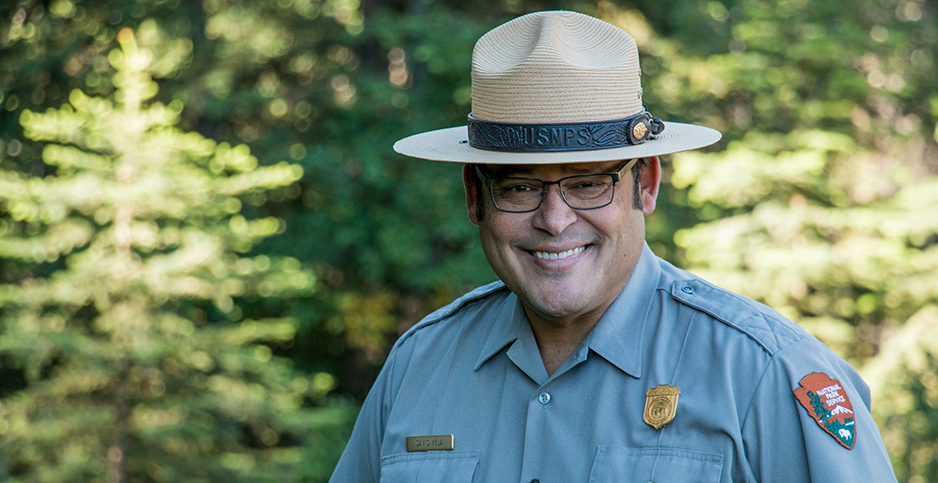 When President Trump signed the Great American Outdoors Act last week, one key player was nowhere to be found: David Vela, the acting director of the National Park Service, who had pushed hard to get the legislation over the finish line, only to miss the celebration.

Vela’s absence at the White House puzzled many, fueling speculation that it was the final snub that caused him to abruptly call it quits three days later.

Only a month earlier, Fox News host Tucker Carlson, a key White House influencer, had called Vela a "moron" and said he should resign or be fired, accusing him of injecting racial politics into the management of national parks after Vela said the park service needed to do more to attract minority employees and visitors.

Two years earlier, Vela arrived in Washington as something of a star: the grandson of a sharecropper, poised to become the first Latino to lead the National Park Service (Greenwire, July 3, 2018).

But the plan never quite followed the script.

After Trump nominated him to become the agency’s 19th director, Vela went to Capitol Hill to pitch himself as a 28-year NPS veteran who had learned important lessons growing up in Texas, to "be humble, maintain a strong moral and ethical compass, and pursue causes greater than myself," he testified (Greenwire, Nov. 15, 2018).

He had big plans, telling lawmakers that he would tackle a $12 billion maintenance backlog and finally end a "scourge of sexual and workplace harassment" that had produced a hostile work environment for the park service and its 20,000 employees.

Vela impressed lawmakers, easily winning confirmation from the Senate Energy and Natural Resources Committee, but things unraveled when the full Senate let the clock expire on the 115th Congress without scheduling a vote. Trump then abandoned Vela, deciding not to resubmit his nomination in the current Congress (E&E News PM, Nov. 27, 2018).

That snub came even as Trump in June nominated another of his acting directors in the Interior Department, conservative lawyer William Perry Pendley, to lead the Bureau of Land Management.

"D.C. is a fickle place," where political fortunes can "turn on a dime," said Jonathan Jarvis, the last NPS director to win Senate confirmation, in 2009.

But with only five months remaining in Trump’s term, Jarvis said the timing of Vela’s exit was "very peculiar," adding: "I think he saw the handwriting on the wall."

‘Just don’t screw it up’

With Vela’s future in limbo after giving up his superintendent’s job at Grand Teton National Park to come to Washington, Interior Secretary David Bernhardt decided to name him acting director on Oct. 1, 2019, setting him up for a particularly brutal 2020 (Greenwire, Sept. 27, 2019).

Big issues emerged quickly, with the park service battling a coronavirus pandemic that resulted in nationwide park closings, followed by weeks of demonstrations against police brutality that had led to violent clashes between U.S. Park Police and protesters and widespread damage of NPS statues.

"I will tell you in my 38 years of public service the last five months have been the most challenging of my entire life," Vela told the National Park System Advisory Board in late June.

A few days later, Vela came under harsh attack from Carlson, a Fox News host whose growing popularity with conservatives has already prompted speculation that he could be a leading contender for the Republican presidential nomination in 2024.

Carlson called for Vela’s ouster after Vela told ABC News that the park service had to step up its efforts to attract minorities, citing a lack of transportation as just one problem facing communities of color.

"Is it racism that the Grand Canyon is a long drive from Phoenix? Do we have to relocate Yellowstone to an urban center?" Carlson asked, telling his viewers on his July 2 "Tucker Carlson Tonight" show that Vela should be focusing on his job "to keep the parks open, to keep them clean, to keep them beautiful."

"God made them beautiful, just don’t screw it up, David Vela," Carlson said. "But he’s not doing that. Instead he is turning nature into yet just another front for racialized politics."

When Trump signed the Great American Outdoors Act on Aug. 4, Vela was not invited to participate in the ceremony.

The park service would not say why Vela did not represent the agency, only that officials instead decided to send Charles Laudner, the NPS assistant director for legislative and congressional affairs. A photograph of the event shows Laudner standing behind the president wearing an NPS hat (Greenwire, Aug. 4).

Vela, the third NPS acting director under Trump, had been a top cheerleader for the new law, which will create a national trust fund to begin paying for a $12 billion backlog of deferred maintenance at the 419 NPS sites. Trump heralded the legislation as "a very big deal," adding: "There hasn’t been anything like this since Teddy Roosevelt."

Laudner, the former chief of staff to Iowa Republican Rep. Steve King who oversaw Trump’s presidential campaign in Iowa in 2016, has assumed an increasingly high profile since joining the park service in 2018.

Most recently, Bernhardt named him executive director of a task force that will soon make recommendations on how to create Trump’s proposed National Garden of American Heroes, a project that’s expected to include statues of 31 people chosen by Trump to honor (Greenwire, July 21).

Vela is leaving his position in his traditional low-key style, declining a request for an interview and saying nothing publicly about the specific reasons that led to his decision to retire.

He wrote only a brief farewell email to employees last Friday, thanking them and saying that he had decided that "it is time to hang up my flat hat for the last time in the coming month" (Greenwire, Aug. 7).

Bernhardt offered a short statement of his own, saying Vela had "always been committed to the mission of the National Park Service."

"I wish him well with his future endeavors," Bernhardt added.

Vela’s departure all but ensures that Trump will not have a permanent director at the park service for his entire first term. That’s the longest streak NPS has gone without a director since it was created in 1916.

It’s also a source of growing frustration for many critics.

"It is in my view completely irresponsible not to fill those jobs on a permanent basis and follow the process as required," said Phil Francis, a former NPS superintendent and chairman of the Coalition to Protect America’s National Parks. "What possible rationale could there be that would warrant such negligent behavior? … It’s a sign of gross incompetence."

After serving as acting director for only 10 months, Vela won’t officially leave until September, but his successor — Margaret Everson, the former principal deputy director of the Fish and Wildlife Service and a counselor to Bernhardt — already took over Monday as Trump’s fourth acting director.

Like Vela, Everson turned down a request to be interviewed. She has not announced any plans for the agency and has made no public statements since taking over.

Unlike the previous acting directors, Vela and longtime NPS veterans Mike Reynolds and P. Daniel Smith, Everson has no prior experience in managing national parks.

Bernhardt called her "a great leader who will provide a steady hand as this transition takes place for the National Park Service." He said this week that one of her first assignments will be to head a task force that will come up with priority funding needs for projects "to maximize the impact of the Great American Outdoors Act."

Everson has degrees in biology and law and worked as chief policy officer of Ducks Unlimited for four years before joining the Fish and Wildlife Service. She also worked for the Interior solicitor’s office and served as assistant attorney general of Kentucky and as general counsel for the Kentucky Department of Fish & Wildlife Resources.

"I don’t know much about Margaret Everson — I know she has a degree in biology, but that does not qualify her to be director of the National Park Service, and having a law degree doesn’t either," Francis said. "And so here we go again, someone acting with the authority of the director, an end run occurring instead of going through the Senate confirmation process — and a qualification issue, where the president and this administration is completely ignoring the Congress and their views."

Everson won praise from Republican members of the Congressional Western Caucus, with Rep. Bruce Westerman of Arkansas citing her "impressive resume" and Rep. Mike Simpson of Idaho saying she brings "a very experienced and diverse background in public lands" to the position.

It’s uncertain what’s in store for the park service in the next five months.

Francis said the Trump administration’s main goal has been to "politicize the agency and to reelect the president," citing its work to privatize park campgrounds, leave positions unfilled, change franchise-fee agreements, roll back air quality regulations and others requirements under the National Environmental Policy Act, and deemphasizing the effects of climate change on parks.

As a result, he said, many career employees feel muzzled.

"People are pretty darn afraid to speak," Francis said. "I can’t imagine why."

Still, with a career employee no longer at the top of the agency to help influence any decisions, Jarvis said he worries that things may only worsen as time runs out for the Trump team. "That’s my biggest fear," he said.