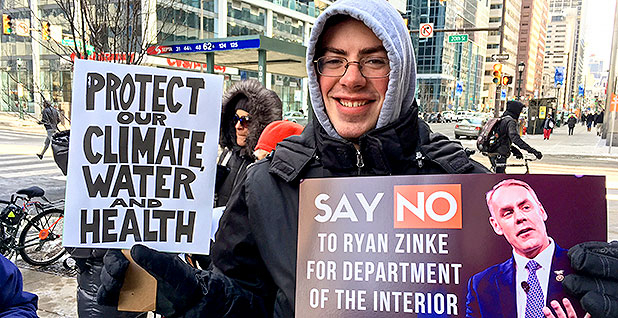 Activists protest yesterday in Philadelphia and other communities against President-elect Donald Trump's nominees and agenda. Photo by 350.org, courtesy of Flickr.

From Maine to California, people rallied against President-elect Donald Trump’s Cabinet picks for U.S. EPA and the departments of Energy, the Interior and State yesterday in an attempt to pressure senators against advancing the confirmations.

The "Day Against Denial" protests were organized to fight back against a conservative spate of nominees seen as hostile to the missions of the agencies they are supposed to lead.

More than 70 rallies and visits to in-state Senate offices marked the first round in a series of actions green groups say they are planning this month to hold elected officials accountable on climate.

Meanwhile, in a victory for environmentalists, two federal political action committees associated with Scott Pruitt, the Oklahoma attorney general who Trump picked to head EPA, announced yesterday they would shut down to avoid distracting from his upcoming hearings (Greenwire, Jan. 9).

The PAC "Protecting America Now" had been circulating a flier soliciting donations the group said would help pay for a media campaign to support Pruitt’s "challenging, but achievable" confirmation.

Senate Democrats, who returned to Capitol Hill last night for a marathon week, said the grassroots pressure is working.

"The resistance to an anti-environment agenda in a Trump administration is going to be driven by what happens in cities and towns all across America," said Sen. Ed Markey (D-Mass.), who sits on the Foreign Relations, and Environment and Public Works committees. "That’s going to be the core strength."

Markey said his staff has been conducting an "exhaustive review" of Pruitt’s environmental record, and he intends to ask tough questions.

Ranking member Tom Carper (D-Del.) yesterday said that he and Barrasso planned to discuss a confirmation hearing for Pruitt during last night’s vote or early today.

"The date that he mentioned to me was I think was the 18th, and I asked, ‘February?’" Carper said laughing.

Sen. Tim Kaine (D-Va.) told E&E News that climate would be an important topic as the Senate considered Pruitt and Trump’s pick of Exxon Mobil Corp. CEO Rex Tillerson to be secretary of State. Kaine is a member of the Foreign Relations Committee.

"There is a theme among a number of these nominees, and the theme is not accepting climate science for some of them — I don’t want to say all of them — so I think that’s going to be a major issue," Kaine said.

The Environmental Defense Fund’s political action arm has been circulating a letter to senators that calls attention to Pruitt’s potential conflicts of interest.

"In 2013, employees at Oklahoma Gas and Electric held a fundraiser for Pruitt. Six days later, he filed a lawsuit against the EPA in an effort to block a rule that the company opposed," the letter states. It also points to two donations to the Republican Attorneys General Association as allegedly influencing Pruitt’s actions.

On the Tillerson confirmation process, which begins tomorrow, the Sierra Club pointed to a report from USA Today exposing Securities and Exchange Commission filings that show that the oil and gas giant did business with Iran, Syria and Sudan through a European subsidiary while those countries were under U.S. sanctions as state sponsors of terrorism.

The group 350.org said protests today drew record crowds. More than 200 people showed up at Republican Sen. Susan Collins office in Portland, Maine. Scores spoke with Collins’ staff, who said it was the largest gathering they had ever seen there.

Rep. Frank Pallone (D-N.J.), ranking member of the House Energy and Commerce Committee, also got in on the action. He joined rallies in Newark before catching his train to Washington, then urged activists to "keep up the fight" on Twitter.

Conservatives at the Heartland Institute, a free-market group that challenges the notion of man-made climate change, panned the protests.

Benson continued, "Frankly, I’m happy these radicals waste their time and money on playacting episodes such as these instead of actually working. Having a sit-in and serenading to the congregation is a much less dangerous way to spend their time than pushing their anti-human, anti-civilizational message in ways that may actually be destructive."

Jay Lehr, science director for Heartland, said he did not understand why environmentalists would oppose Tillerson, who has said he supports climate action.

"I hope he is Trump’s sacrificial goat to the Senate committees that will be questioning his appointees," Lehr said.